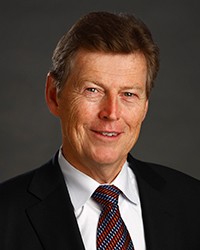 Prior to joining Teck, Mr. Horswill spent almost 20 years in the Public Service, culminating in the positions of Deputy Minister of Finance and Corporate Relations and Deputy Minister of Energy, Mines and Petroleum Resources for British Columbia. Before entering government he was employed at Utah International (BHP) and at INCO.

Mr. Horswill holds a Bachelor of Applied Science degree in Mineral Engineering and a Master of Arts degree in Economics from the University of British Columbia.