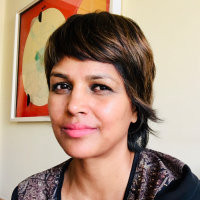 Rupa Subramanya is a researcher and writer with graduate degrees in economics and international affairs from Carleton University, with more than ten years of experience in impactful, evidence-based public policy analysis and commentary focusing on India and the Asia Pacific region. At present, Ms. Subramanya is a columnist for the National Post and Nikkei Asia, focusing on Canada, India, and Asia Pacific issues.

For a decade, Rupa was based in India, where she wrote regularly on economics and public policy issues in publications such as The Wall Street Journal, Foreign Policy, and The Globe and Mail, among others. She has written reports on India and Asia Pacific issues for think-tanks in Canada and India and co-authored a best-selling book, Indianomix, published by Random House in 2012 and reprinted in paperback in 2015.

Ms. Subramanya’s writing on violence against women in India led to a co-authored front page story in The Wall Street Journal (2013), which won the prestigious Society of Publishers in Asia award, and the story was anthologized in a book published by Harper Collins. Her recent research on sectarian violence in India has been widely cited, including in The Financial Times (2017).

She is frequently interviewed in the international media, including in outlets such as The New York Times, Financial Times, and BBC News and by think-tanks such as Hudson Institute. Her research and writing have been quoted in parliamentary debates in both India and Australia.

Ms. Subramanya has spoken at numerous invitation-only conferences and seminars, including making presentations to government officials and corporate and civil society leaders. Fora that she has spoken at or been invited as a panellist include the American Enterprise Institute, the Liberty Fund, the India Trilateral Forum (Swedish Ministry of Foreign Affairs), the US National Nuclear Security Administration, and Asia Society, amongst others.