Canadian Perspectives on the TPP: A Closer Look at the Undecided

The 12-country Trans-Pacific Partnership (TPP), signed in October, is likely to be the subject of much public debate in the new year. As member countries proceed to the ratification stage, critics and proponents will be making their case for or against the regional trade agreement.

Canada’s new government continues to formulate its approach to the trade deal. Trade Minister Chrystia Freeland has been engaging in a consultative process, and said recently, “It’s not my job to persuade anybody that TPP is good.” Nonetheless, if Canada’s partners go ahead with ratification, Ottawa will soon have to persuade the Canadian public on its preferred policy, one way or another.

Assuming the government decides to pursue ratification, whom will it need to persuade? Who has dug in their heels, and who is open to having their mind changed? And what messages are likely to resonate?

In this post we take a look at a cross-section of the Canadian public we call the ‘Undecided Traders.’ We think this group will swing majority public opinion toward either support or opposition to the TPP. They are generally supportive of trade with TPP member countries and when they learn more about the agreement, we expect the majority of Undecided Traders will support it.

In our previous posts, we underlined two key trends in public opinion toward the TPP.

First, opposition has been increasing. Between the spring and fall of 2015, the Angus Reid Institute tracked an increase in stated opposition. The Asia Pacific Foundation of Canada’s fall 2015 poll found support and opposition almost equal at 41% and 38%, respectively. 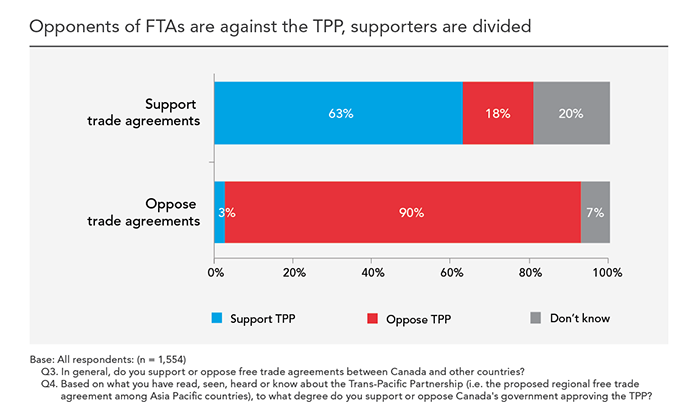 We think the population most open to persuasion either way is the group of Undecided Traders. This group supports free trade agreements in general, but answers “don’t know” when asked about support or opposition to the TPP. According to APF’s fall 2015 survey, the Undecided Traders make up around 13% of the adult population. We suspect they are likely to develop an opinion on the TPP eventually, and have the potential to swing the momentum of public debate to either side.

So, who are the Undecided Traders, and what do they think? Below, we have compiled three noteworthy characteristics of this group.

One striking demographic feature of the Undecided Trader group is that they are disproportionately women. In total, women make up about two thirds (68%) of all Undecided Traders. 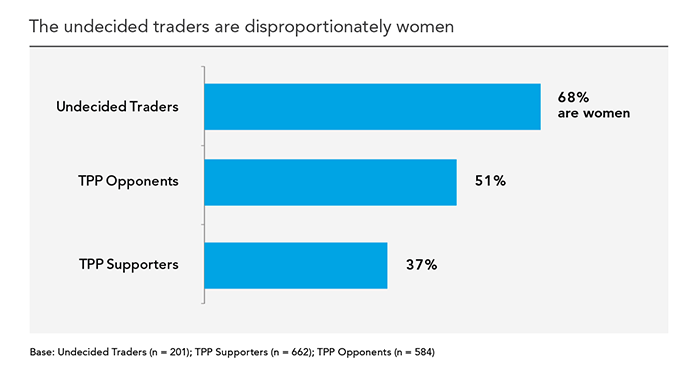 It is not surprising that there is some unequal gender distribution among the groups. For example, social science research, both in Canada and beyond, has consistently found that men tend to be more supportive of international trade and trade agreements than women.

Likewise, the concentration of women in a “don’t know” category when it comes to economic relations with Asia is also consistent with past research at APF Canada.

Strictly on the basis of demographic characteristics, one could expect the Undecided Traders to lean toward opposition. Yet underlying openness toward trade agreements – specifically with TPP member countries – could also pull them in the opposite direction.

The Undecided Traders may be on the fence regarding the regional trade deal, but they are relatively open to trade agreements with a majority of TPP countries.

On this score, the Undecided Traders are, in fact, shown to be traders. Indeed, they are generally inclined toward trade agreements with TPP countries, and their views tend to be closer to supporters of TPP, rather than opponents.

Why then is this group unsure about adopting a position on the TPP?

3. Undecided About the Unknown

One of the reasons The Undecided Traders are undecided about the TPP is simply that they don’t know much about the agreement. 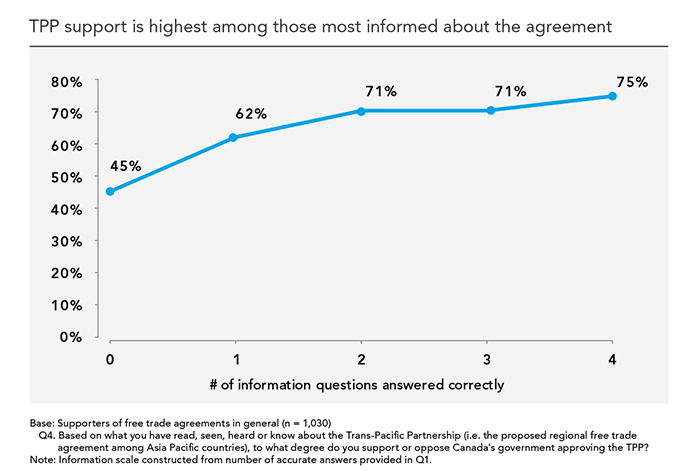 We asked respondents a set of four factual questions about the TPP. On average, supporters and opponents of the TPP both answered two questions correctly. Undecided Traders, on the other hand, answered only one question correctly.

This low level of knowledge is likely a factor depressing support for the TPP among Undecided Traders.

These findings suggest that support levels for the TPP among the Undecided Traders have the capacity to grow, provided that the group is more informed about the agreement, moving forward.

Canadians’ current attitudes toward the TPP are not set in stone. The public debate is dynamic, with new arguments continually being advanced and new endorsements being announced both for and against the TPP.

Opinions are moving. Just since the summer there has been an increase in opposition. We attribute this change to the consolidation of opinion among those who oppose trade agreements in general. Still, no survey has had opposition higher than support, and there is still a sizable percentage of the population that has yet to make up its mind on the deal.

We suspect the sizable group of Undecided Traders is likely to break toward support. Certainly there are reasons to doubt this position. If they were enthusiastic free traders they would already be on board, and the largely male base of TPP supporters stands apart, demographically, from the Undecided Traders, who are largely women.

Nonetheless, the Undecided Traders are, in fact, trader supporters: they tend to offer support for FTAs with most member countries in the TPP zone. To some extent they just have not paid as much attention to the public debate as TPP supporters or opponents.

We did not find any evidence of a ‘magic bullet’ to persuade this particular group. For proponents of the TPP, much of what needs to be done is basic: outlining some of the features of the new trade agreement and sufficiently identifying which countries are actually in the TPP zone. Many within the Undecided Trader group are already persuaded by the argument for trade agreements. They just need to be reminded of a case they already believe in: that there are benefits from freer trade, and economic risks for a Canada that is opted out of a significant regional trade zone. 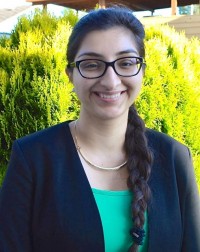 Support For the TPP: Room to Grow? What Do Canadians Think About the TPP? (Part 2) What’s Behind Canadian Women’s Caution Toward Asian Investment? Read more >