Dairy and Digital Rights: How the Canadian Media Covers the TPP

Critics accuse the architects and participants of the ongoing Trans-Pacific Partnership (TPP) negotiations of excessive secrecy. Some go so far as to suggest the talks lack a democratic mandate. This perceived information vacuum is allegedly borne out by polls that find that a high proportion of Canadians lack any knowledge of the TPP.

But just how much of a secret is the secretive TPP? Critics are correct in their assessment that the details of the text are held tightly under wraps. Yet coverage of the talks does exist. To understand what Canadians may have gleaned from the TPP discourse to date, we investigated the extent of coverage and the key issues discussed.

While the details of the agreement’s text remain confidential, the TPP itself has been the subject of over 200 pieces in Canada’s major press. The Canadian debate on the TPP, however, has been relatively narrow, focusing on the issues of supply management and intellectual property rights. Canadian media consumers are likely to have read about some of the anticipated costs of joining the agreement, though little specific about the potential gains.

The Extent of TPP Coverage in Canada

To examine what Canadians may have learned about the TPP, we focused on coverage in four major Canadian newspapers. Our review included both major national papers, The Globe and Mail and the National Post, which provide content and information for many publications across Canada. The Toronto Star was included as it has the largest circulation in the country. We also included The Vancouver Sun, which has a deliberate Asia-Pacific focus and serves as an influential voice in this space. We collected all articles published before July 18, 2015, regardless of length, where the TPP was mentioned in the headline or lead paragraph. 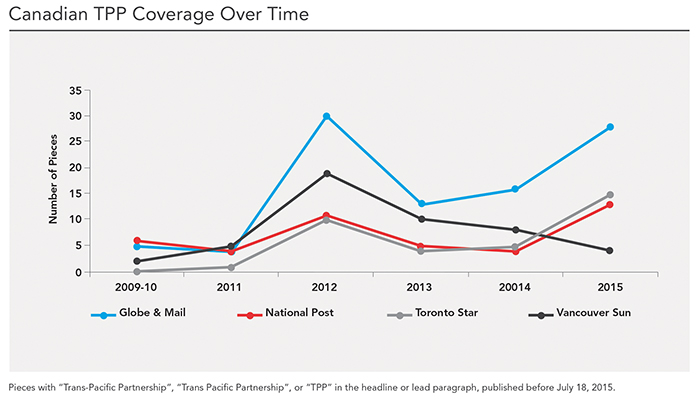 A total of 222 articles were identified. The first article in our dataset dated back to 2009 — a Financial Post piece entitled, “Canada May Join Asia-Pacific Talks; Big Trade Area Planned.” Coverage did not pick up steam for another three years after that. In 2011, Canada announced its intention to join the TPP, and formally became a negotiating partner in 2012. In that year, coverage spiked in all four papers. The Globe and Mail led the way with 30 pieces mentioning TPP in the headline or the lead paragraph, followed by The Vancouver Sun with 19.

The initial debates about whether Canada would be allowed to join — and whether Canada should join — tapered off after 2012. Coverage dipped, and would not reach 2012 levels again until 2015, when it appeared the end of negotiations were in sight.

What Did the Papers Cover?

Canadian papers have been covering the TPP for years. But what was their focus?

To answer this question, we used text-analysis software to identify the most common terms appearing in the selected articles. These included phrases with more than one word like, “negotiating partners,” “tariff barriers,” and “trade agreement.” In our analysis, we considered all terms that were used five or more times.

Looking at these key terms, we find that much of the coverage of the TPP has been procedural. This includes information on the negotiating partners, discussion of timelines, and broad descriptions of the TPP itself. In terms of content – or potential content – of the agreement, Canadian coverage of two issues clearly stands out: supply management and intellectual property rights (IPR).

Supply management is a series of quotas, tariffs, and other government rules to control the production and price of some agricultural products like dairy, poultry and eggs. It is expected that the final TPP agreement will require partners to open their agricultural markets to foreign competition by lowering tariffs and reducing the role the government plays in setting prices and production quotas. Farmers protected by supply management have expressed strong reservations about joining the TPP, and have lobbied the government to carve out exemptions for their industry. Not surprisingly, “supply management,” “poultry farmers,” and “dairy industry” were among the most commonly found terms in the dataset. We coded an article as discussing supply management if it used one or more of the terms associated with that issue. 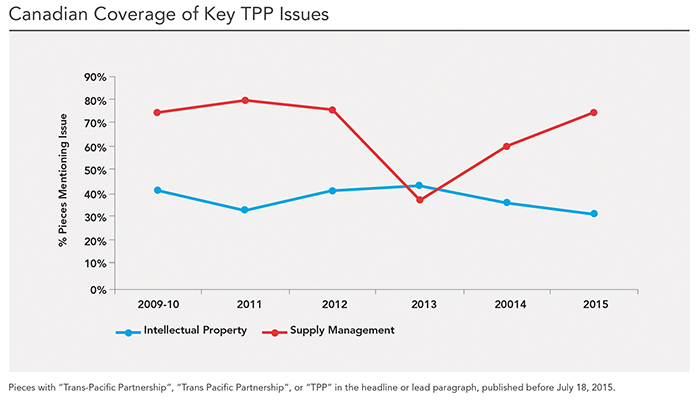 Similarly, intellectual property rights were widely discussed throughout the coverage of the TPP. The TPP has been referred to as a “next generation” trade agreement, in that it covers topics beyond tariffs and market access, such as intellectual property rights, the role of state-owned enterprises, and environmental standards. In particular, IPR has become a hotly contested issue. Since Canada’s intellectual property laws are not as stringent as those of other TPP partners, Parliament will likely be required to alter domestic legislation to implement the final agreement. While terms like “patent protection” and “public domain” were clearly part of the IPR debate, it also stretched to the cost of drugs and the availability of medicines, encompassing terms like “health advocates” and “pharmaceutical companies.” Again, we coded an article as having discussed IPR if it included at least one mention of the key terms associated with that issue.

Second, IPR has been a hot issue throughout the coverage of TPP. Approximately 38 per cent of articles mentioned IPR. IPR received the most coverage in 2013, a year in which there was a swell of articles about drug prices, online privacy, and Wikileaks’ publication of the confidential IPR chapter of the TPP agreement. 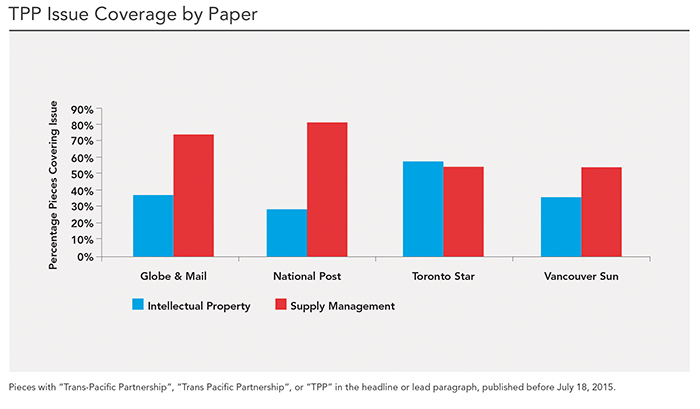 There has been some variation in the coverage afforded each issue by individual papers. The two national publications – The Globe and Mail and the National Post – tend to cover supply management more than the regional papers. Still, the basic pattern of coverage – a strong focus on supply management – is consistent across publications. The Toronto Star is the only publication where IPR issues have received more coverage than supply management. In part, this reflects that a substantial proportion of the Toronto Star’s coverage of the TPP – approximately 20 per cent – consisted of pieces by University of Ottawa legal scholar Michael Geist, an expert on IPR issues.

Critics of the TPP point to a secretive process that has kept the public in the dark about the contents of the agreement. To some extent, the critics’ complaints carry weight, as the public will not see the full text of the agreement until it is finalized.

Nonetheless, there has been considerable coverage of the TPP throughout Canada’s involvement, and we will see record coverage through the end of 2015. Arguably, the coverage has been narrowly focused. In terms of the content of the agreement and its consequences, the public debate in Canada has focused on areas of negativity. Supply managed sectors worry about loss of jobs, while those interested in IPR warn about high drug prices and restricted digital rights. Certainly there are many editorial pieces advocating the government end supply management, but these still frame the TPP in contentious terms, where an industry will be seen as potentially ‘losing’ from the deal.

In contrast, the perspective of those industries likely to benefit from an agreement – particularly the services sector and producers of agricultural exports – have not received much coverage. If a final agreement is released, it will be important for Canadians to hear about new and under-reported issues and emergent sectors, including arguments for and against the historic agreement. 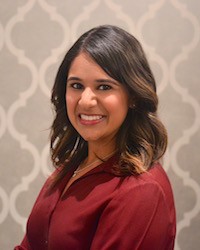