A Market Matures: The Consolidation of the AEC

The Association of Southeast Asian Nations (ASEAN) is taking an important step on its journey of economic growth and development at the end of 2015 that started nearly two decades ago—the full implementation of the ASEAN Economic Community (AEC).

The AEC seeks to capitalize on the region’s accelerating economic growth, social progress and cultural development, along with its rapidly growing middle class population and potential to grow as an industrial powerhouse.

The AEC is designed around four key components that are inter-related and mutually reinforcing: 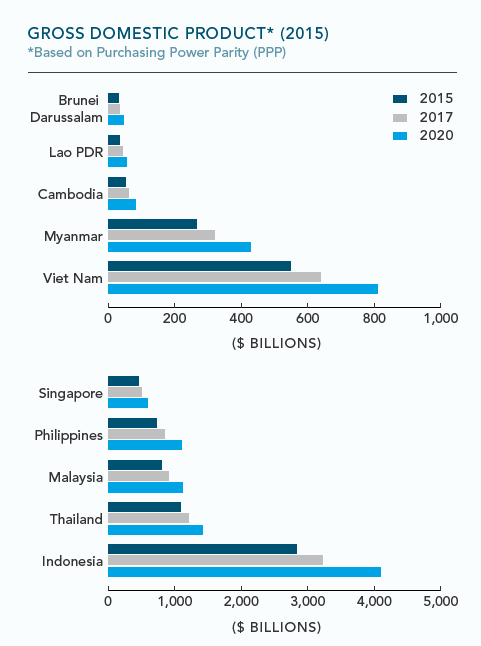 The International Monetary Fund (IMF) projects in 2015 ASEAN’s gross domestic product (GDP) in purchasing power parity (PPP) will be US$6.9 trillion or 6.11 per cent of global GDP. By 2020 this is projected to be US$9.8 trillion, or 6.57 per cent of the global total. The middle class is estimated to grow to 163 million households, with a combined annual economic value of US$1 trillion. As the number of those households grows, the region is expected to need US$60 billion a year over the next decade to fully address its infrastructure needs. (1)

ASEAN Sells to the World: Exports

Core to its single market pillar is a commitment to the free flow of goods and services both within the AEC and to international markets. ASEAN export values to the world in 2014 stood at US$1.3 trillion, with intra-ASEAN exports making up 26 per cent of those exports. Canadian exports to ASEAN grew from C$2.7 billion in 2004 to C$5.6 billion in 2014. ASEAN trade in services has grown by 143 per cent in the past decade, even taking into account the brief dip due to the global financial crisis. With the anticipated growth of the ASEAN economy, Canada can expect to expand its exports in both goods and services to the region. 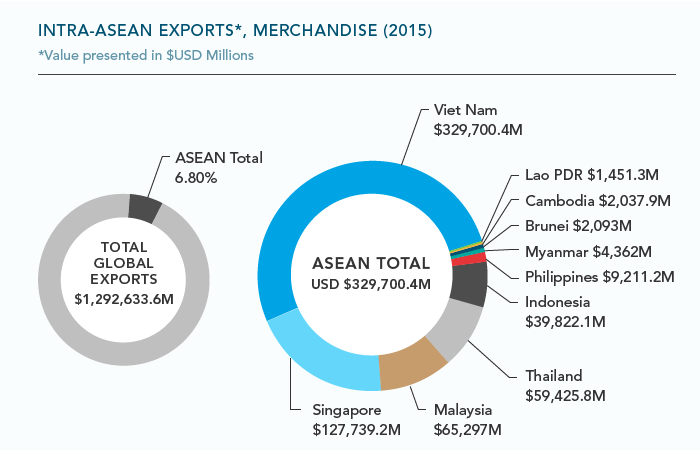 A key component of the free flow of goods has been the removal of tariffs in the AEC. At present, 96 per cent of all tariff lines across ASEAN have no intra-ASEAN tariffs. For the remaining products, the average intra-ASEAN tariff is 0.54 per cent, a reduction from 2.99 per cent in 2003. Tariff elimination alone, however, does not create an open market. Additional benefits to intra-regional trade can be realized through continuous simplification of Rules of Origin (ROO), as well as the ASEAN Self-Certification Project. Under the Self-Certification scheme, the primary responsibility for origin certification is met by traders and manufacturers. Simplification of the ROO makes it easier for companies to become self-certified, energizing regional trade links by giving those exporters the freedom to declare that their products have satisfied ASEAN Rules of Origin criteria. Meeting the ROO criteria allows certified exporters to benefit from trade preferences under the ASEAN Trade in Goods Agreement.

Primer: The AEC vs. the EU
While they share many similarities, there are several key differences that make the AEC a less integrated economic bloc than the EU. Where the EU maintains its single market through supranational legislation and institutions, the AEC features a small secretariat that has no supranational authority. The AEC also lacks a common currency, which allows for greater monetary sovereignty but restricts the flow of goods due to foreign exchange processes. Finally, AEC’s external trade policies are co-ordinated among member states, where the EU engages a customs union.

The removal of tariffs throughout the AEC presents a significant advantage for Canadian companies in two ways. First, companies that manufacture in the region will be able to take advantage of the free flow of goods through the AEC when exporting finished goods. Second, Canadian companies that rely on ASEAN nations for intermediate goods in their supply chain will benefit from reduced costs not only in goods, but also in simplifying the ‘paperwork’ necessary to move goods through the region.

The Ebb and Flow of ASEAN FDI

Foreign Direct Investment (FDI) inflows to the region have trended upward since the global financial crisis of 2008, with ASEAN’s total FDI inflows equal to 11 per cent of global FDI inflows in 2014. Since 2012, intra-ASEAN FDI has contributed the biggest share of ASEAN’s total inward FDI flows. Based on current trends, this is only expected to continue to increase. 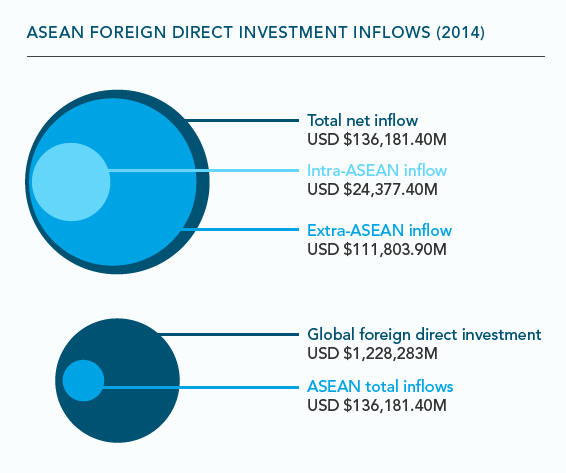 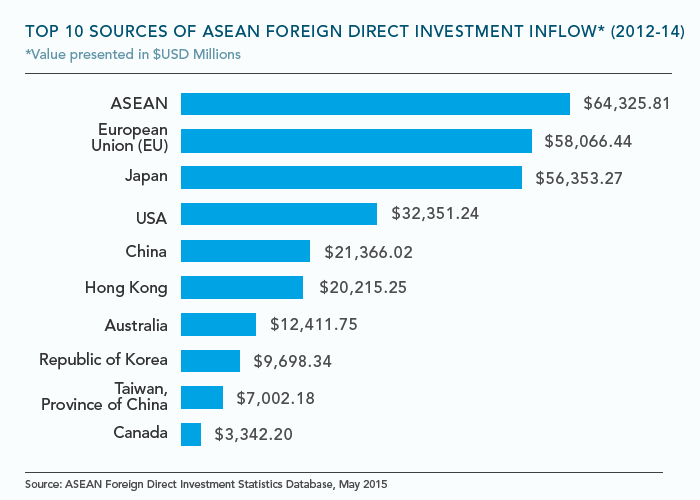 Improved connectivity will be central to realizing the ambitious goals of the AEC. ASEAN nations have been putting considerable effort into growing their connectivity, with great progress made in improving infrastructure critical to transport, communications, and energy. In terms of physical infrastructure, the ASEAN nations have been focusing on roads, rail, ship, and air in order to connect the more than 600 million people who live and work in the region. With massive growth expected in all infrastructure sectors, myriad opportunities will arise for Canadian companies operating in the region. 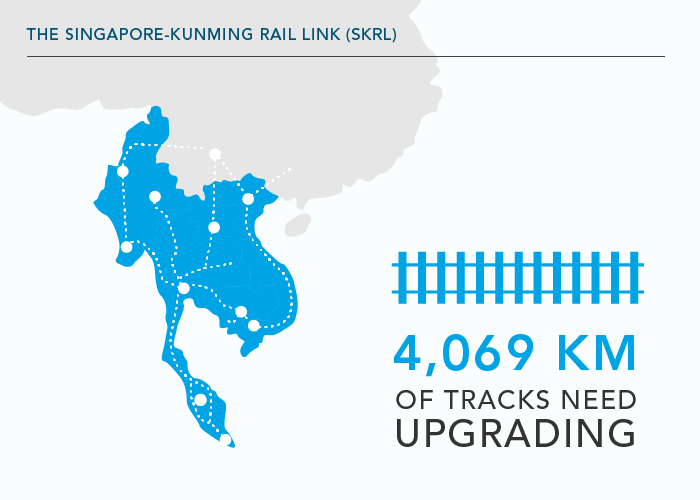 Across the entire region, a total of 120,000 km of roads have been laid and improved. Meanwhile, the Singapore-Kunming Rail Link (SKRL) – Connecting Singapore, Malaysia, Thailand, Cambodia and Vietnam to Kunming, China – has seen significant upgrades. Included in the SKRL project are spur lines that connect Thailand to Myanmar and Laos. The SKRL project consists of 4,609 km of missing lines, or lines that need upgrading. For maritime and air transport, 47 ports have been designated for upgrades to their ship and cargo capacity, while the number of international airports across the region has grown from 57 to 67 in the past decade. The goal of this development strategy is to achieve greater transport integration and inter-modal interconnectivity by 2025. 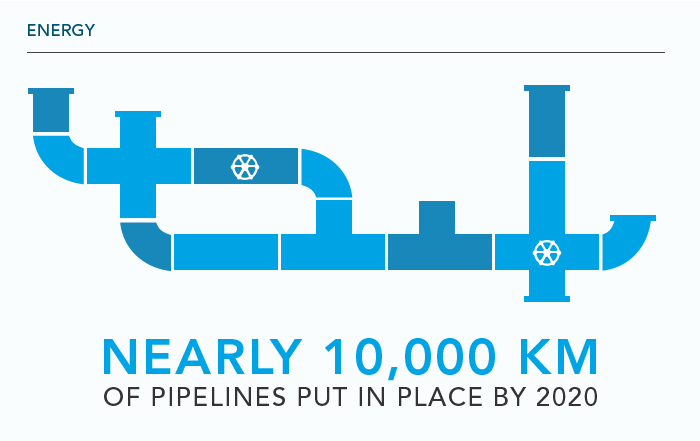 Information and Communications Technology (ICT) is recognized as a core driver of the AEC’s growth. The importance placed on increasing the connectivity of people in every nation in ASEAN is clear to see. A strong ICT infrastructure with broad connectivity in ASEAN can facilitate the creation of a business environment that is conducive to attracting and promoting trade, investment and entrepreneurship. E-commerce is an increasingly vital sector in the global economy and plays a key role not only in cross-border trade, but also in attracting FDI through the supply of intermediary services. Investment in ICT infrastructure allows the member nations to develop modern economies that can participate in the global economy on an equal footing with developed nations. The growth of the region’s online presence reflects the investment individual nations have made in developing their respective ICT infrastructure. 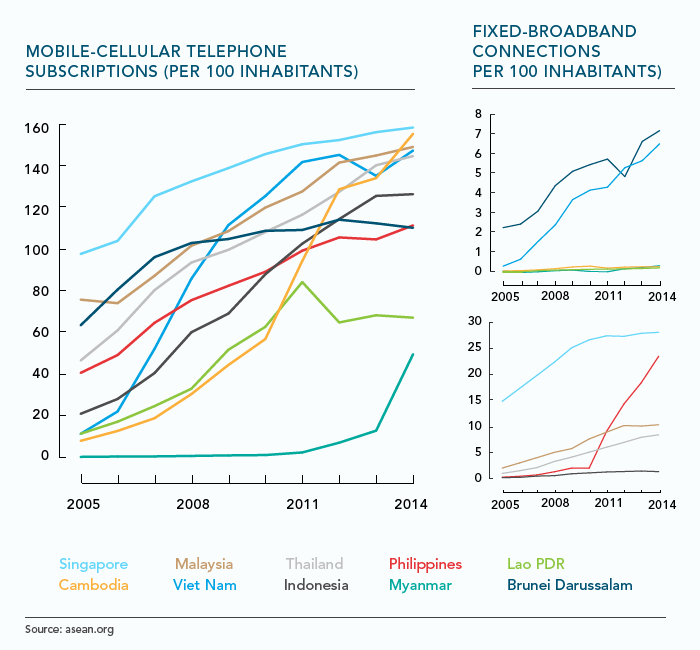 The consolidation of the AEC represents an important initiative that will have a global impact. As ASEAN continues to grow as a market, the simplification of trade and connectivity in the region will be key in accelerating regional development. Although challenges still remain in the implementation of the AEC, it is now possible to view the region as a single economic bloc, rather than 10 individual economies.

Financial integration, trade regimes, and the flow of labour and capital in the region will change the way companies operate, and the potential gains from further integration in all these spheres remains large. Continued implementation of the AEC pillars will lead to an ASEAN that is more proactive, with the structure and frameworks in place to operate as a socio-economic community, committed to developing the region while pursuing the goal of global integration.

Ian McDonald is a post-graduate research fellow at the Asia Pacific Foundation of Canada. Before joining the APFC, Ian served as an intern with the Canadian embassy in Myanmar.

The 7th Congress of the Workers Party of Korea, or North Korean Pomp and Circumstance Victory and Governance: The Challenges of Leadership in the New Myanmar Election Myanmar: A Prelude to Change?