Where in the World do Canada’s Exports Go?

Statistics Canada has released its trade statistics for 2014. Here is a snapshot of where Canada's merchandise exports went in 2014.

The United States remains the primary destination for Canadian merchandise. However, partly due to the global financial crisis, the absolute value of American exports has remained relatively unchanged. From 2007 to 2014 Canada's exports to the U.S. grew by 9.7%. In contrast, Canadian exports to Asia grew by 59.9% during that same period, from C$32 billion in 2007 to C$51.2 billion in 2014.

In terms of what Canada exports to Asia, agricultural and agri-food products top the list. The value of these exports grew to $14.2 billion in 2014 and accounted for 27.9% of Canadian exports to the region. Exports of metals and minerals and of wood, pulp and paper followed at $11.5 billion and $8.6 billion, accounting for 22.8% and 16.7% of Canada’s exports to the Asian region. 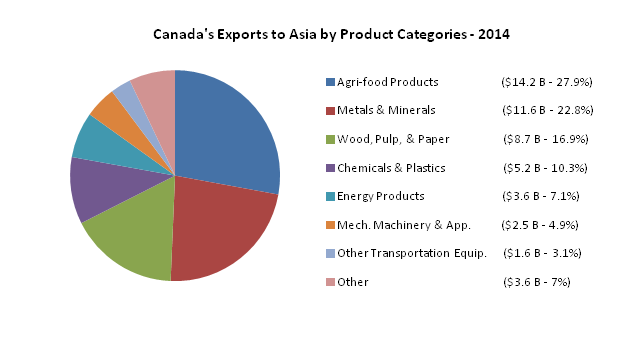 To explore Asia’s impact on each of Canada’s provinces and territories, visit our microsite TheAsiaFactor.ca where you’ll find interactive data, including the latest export and import statistics, broken down by province from 2000 to 2014.

Canada-China Relations Since Meng Wanzhou’s ArrestAre Francophones and Anglophones so Different in Their Views on Asia?