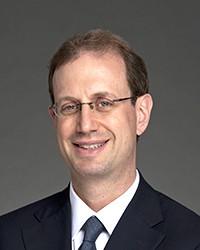 Mark Wiseman is a Canadian investment manager and business executive and an industry-leading expert in alternatives and active equity investments. Among his advisory roles with various organizations, Mark serves as the chair of the board of directors of the Alberta Investment Management Corporation, and as a part-time Senior Advisor to Hillhouse Capital and Boston Consulting Group.

Prior to joining the CPPIB, Mark was responsible for the private equity fund and co-investment program at the Ontario Teachers’ Pension Plan. Previously, Mark was an officer with Harrowston Inc., a publicly traded Canadian merchant bank and a lawyer with Sullivan & Cromwell, practicing in New York and Paris. He also served as a law clerk to Madam Justice Beverley McLachlin at the Supreme Court of Canada.

Mark was a member of the Advisory Council on Economic Growth, which advised the Canadian Finance Minister on economic policies to achieve long-term sustainable growth. He is co-founder and former Chair of the Focusing Capital on the Long Term initiative. Mark also serves on the board of several non-profit organizations, including Alpine Canada, the United Way of Greater Toronto, Sinai Health Services, the Capital Markets Institute and the Dean’s Advisory Board at the Rotman School of Management, University of Toronto. He is also a co-founder and Chair of the Century Initiative, an organization dedicated to growing Canada’s population. Mark is a certified member of the Canadian Institute of Corporate Directors. Previously, he chaired the United Way of Toronto’s 2015 Campaign and Youth Without Shelter and is a past Board Member of Right to Play International and the Canadian Coalition for Good Governance.