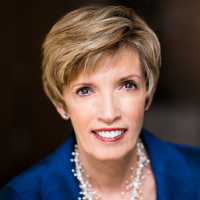 Kathy Kinloch is the former President of the British Columbia Institute of Technology (BCIT), Canada's premier polytechnic institution which serves approximately 50,000 students annually, where she focused on broadening and deepening BCIT’s globally relevant connections with business, industry and community within B.C., across Canada and globally to meet the needs of today’s and tomorrow’s employers and learners.

Kathy is recognized for leading strategic organizational renewal by empowering people in complex environments. Through a series of senior leadership and executive roles, she has spearheaded successful strategic change initiatives in the post-secondary as well as government and health care sectors.

Acknowledgements of Kathy’s accomplishments include a Power 50 list citation and Most Influential Women in Business acknowledgement from BC Business magazine; Influential Women in Business Awards, Business in Vancouver magazine; Woman of Distinction, YWCA Metro Vancouver; Top 100 Hall of Fame and Top 100 Public Sector Leaders, Women’s Executive Network (WXN); and an Honorary Doctor of Laws from Royal Roads University. Kathy was also honoured as “Canada’s Most Admired CEO of 2018” and BCIT as one of “Canada’s Most Admired Corporate Cultures for 2019” in the Broader Public Sector categories by Waterstone Human Capital.

Kathy holds a Diploma in Nursing and a Bachelor of Science (Nursing, with Distinction) from University of Alberta, a Master of Arts in Leadership (Chancellors Award) and a Graduate Certificate in Executive Coaching from Royal Roads University.

Kathy’s board positions include the Business Council of BC; Surrey Hospital Foundation; the Public Policy Forum and TELUS Corporation. She is also a member of the Business + Higher Education Roundtable, the Asia Business Leaders Advisory Council of the Asia Pacific Foundation, and chaired the Province’s Emerging Economy Task Force. She was appointed to the Order of British Columbia, the Province’s highest form of recognition, on August 1, 2022.