The Asia Pacific Foundation of Canada (APF Canada) hosted a national conference in 2014 on building Canada’s ‘Asia competence’ – the knowledge, skills, and experiences young Canadians will need to be effective working with their counterparts across the region. One of the central outcomes of the “Canada’s Asia Challenge” conference was how to do a better job of demonstrating to young Canadians (and their parents) the short-term and long-term value of participating in study and work experience programs in Asia.

Eyobe Melketsadik attended the national conference during a work trip as part of his internship in Japan, which began in 2009. Recently, Eyobe talked to us about his experience “drowning” in the Japanese language, and how this sense of overwhelming struggle ultimately led to the opportunity of a lifetime ­– helping a Japanese curling team chase its Olympic dreams.

APF: Like many Canadians, you’ll be watching the Winter Olympic Games kick off this week in Pyeongchang, South Korea. But unlike most spectators, you have a personal connection to some of the athletes who will be competing. Tell us about that.

EM: Starting in 2014, I spent almost a year and a half in Japan working as an interpreter at the Hokkaido Women’s Curling Academy. Hokkaido is Japan’s northernmost major island and a sister province of Alberta, where I am from. 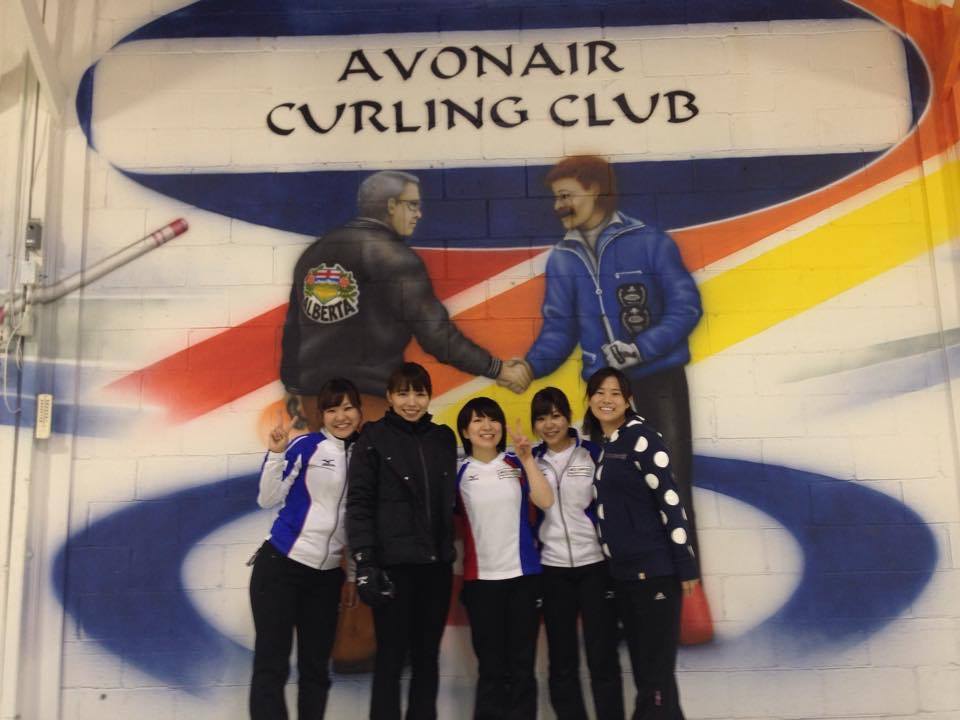 After the 2014 Winter Olympic Games in Russia, the Japanese government made curling a priority sport, which led to the establishment of the curling academy where 30 athletes trained. I was the interpreter between a Japanese team called LS Kitami and J.D. Lind, a coach brought over from Calgary.

While some of the athletes on LS Kitami have competed in the Olympics before, this is the first time they qualified for Olympics as a team.  Their first match will be on February 14.

APF: That sounds like quite a unique opportunity. How did you get the job?

EM: The job was offered through Alberta Abroad, an ‘externship’ program run by the Alberta Government [but was discontinued in 2017]. Through that program, the province made an investment in strengthening the global skills of young Albertans who did paid international internships that lasted at least six months. I was working in Japan as an Assistant English Teacher in a rural area called Gifu when someone back in Alberta told me about the job posting.

APF: Working as an interpreter requires quite a high level of language capability. How was it that you could speak and understand Japanese so well?

EM: My high school in Edmonton offered Japanese, so I started studying it in Grade 11, and then continued when I became a student at MacEwan University [in Edmonton, Alberta]. At the time, MacEwan was just setting up a new study abroad program in the city of Nagoya, and I was the first student from my university to go there. I’d never even left Canada before that, and now I found myself flying off for a full year.

According to the Alberta Government, the province has played a key role in making Hokkaido the curling capital of Japan. In fact, the city of Kitami has produced most of Japan’s top curlers.

It was the defining year of my life. I tried to make the absolute most of my time there by working really hard to improve my Japanese. I studied every single day, but also made a real effort to make Japanese friends to play basketball or soccer with, or just to hang out with after class. I don’t want to suggest that it was easy; in fact, there were times when I felt like I was ‘drowning’ as I was trying to push through the difficulties of getting my Japanese language skills to the next level. But it was like the feeling of drowning is what forced me to learn how to swim. I remember how great it felt when I reached certain milestones – going to an Izakaya (Japanese pub) and ordering in Japanese without having to use a dictionary, for example, or watching a Japanese TV program without having to look at the subtitles. That felt like ‘real-life final exams,’ and when I passed, it motivated me to keep going. 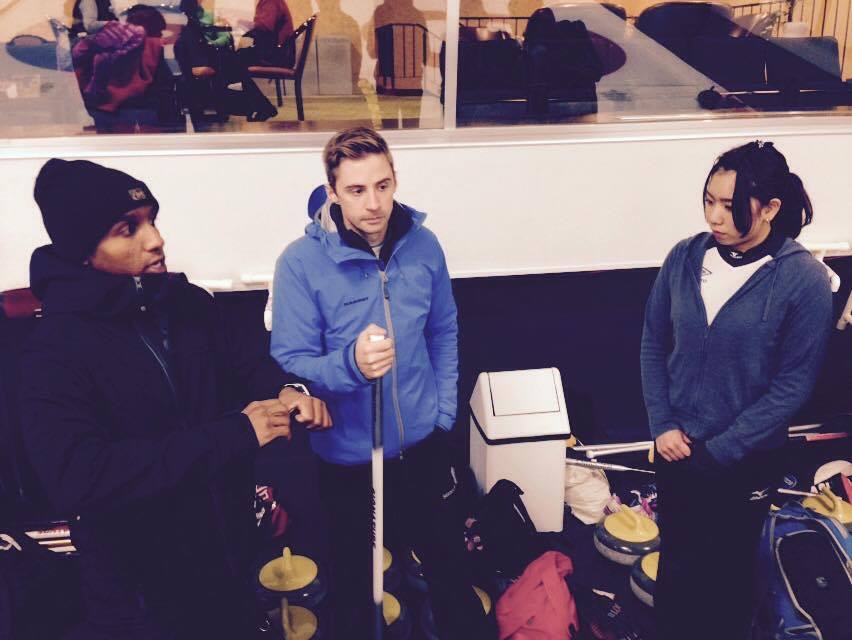 APF: Before you got the job as the interpreter, how much did you know about curling?

EM: Not much at all. Like a lot of Canadian kids, I grew up loving and watching hockey, so I had to learn about the sport and a whole new vocabulary very quickly. The athletes and coach were so welcoming and supportive, even teaching me how to curl. I remember when a Japanese news crew came to interview the coach, and I just felt like their questions were flying at me so quickly and how difficult it was to keep up. But it was a good environment in which to learn ‘on the job,’ and the discipline I’d developed earlier for studying Japanese served me well.

APF: Some people in Canada are wondering what the ‘return on investment’ is for programs like your study year in Japan or your internship through the Alberta Abroad program. How you would respond to that?

There are so many ways I could answer this question. When I came back from Japan the first time, I was so inspired by the many people who helped me get there and made it such a positive experience, that I decided to get involved with international student services once I returned to MacEwan. I’m now working as an Academic Advisor with an international focus at the Northern Alberta Institute of Technology (NAIT), and try to provide the kind of support for foreign students here that others provided me. I also became involved with the Edmonton Japanese Community Association’s event called “Explore Japan,” and gave talks at local high schools about Japan and what I experienced there. 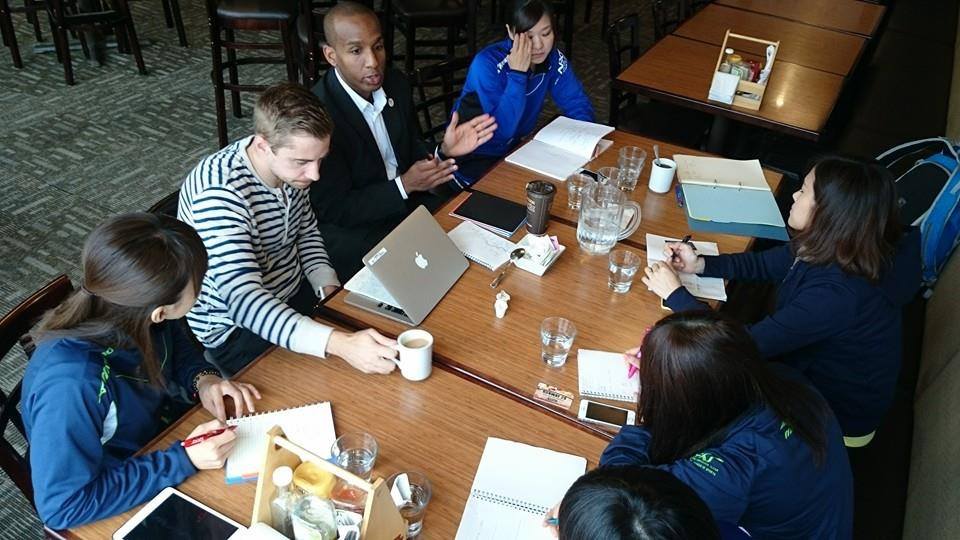 But I would also say that all of these experiences have impacted me at an even deeper level. I remember in particular the women on the curling team were so determined to keep working hard and getting better, and not to get discouraged by setbacks. At one competition, they fell short of their goal, but their focus, drive and most importantly love for what they do kept pushing them forward. Now they are going to the Olympics and I feel eternally grateful to stand on the sidelines and watch and learn from their story. The lessons I learned from those athletes, the coach and my time abroad I carry with me each day and try to pay it forward with the people I help in my career.

Eyobe has produced a YouTube series called Eyobe in Japan, which includes a short video about his job with the Hokkaido Women’s Curling Academy.