Katrina Koehn is a second-year student at Simon Fraser University. She recently completed a co-op term in Mae Sot, Thailand, near the border with Myanmar (also known as Burma). While there, she worked for two NGOs, Burma Border Projects and its partner, the Room to Grow Foundation. Both organizations provide services to the migrant and refugee populations that have left Myanmar over the past 60 years. Katrina is the recipient of an Asia Pacific Foundation of Canada 'Asia Connect' award to help support her co-op term in Thailand.

Can you give us an overview of what Burma Border Projects and Room to Grow do?

Burma Border Projects is an organization that focuses on psychosocial wellbeing for Burmese migrants, including mental health and education programs. Room to Grow aims to alleviate poverty, specifically in un-parented children who have taken refuge in Thailand. Both these organizations do most of their work in refugee camps, migrant schools, and boarding houses.

What were the most challenging and rewarding aspects of your time there?

The most challenging thing was the language barrier. I didn’t have any training in either the Thai or Burmese language before I went, and my placement wasn’t long enough for me to become functionally fluent. It was a steep learning curve once I was there, and I often felt frustrated because I sensed that there were things I was missing out on learning because of that language gap.

This may sound strange, but the language barrier was also one of the most rewarding things. There were so many times when I was physically lost or not sure how to do something. Never before had I experienced a culture in which people were so willing, patient, and enthusiastic about helping me. For example, if I was in a market, I could approach someone and ask if they could speak English. If they didn’t they would ask someone to watch their shop while they went and found someone who could. That type of thing happened countless times.

I don’t think empathy gets the attention it deserves in the broader conversation about soft skills, even though good leaders and good communicators need a strong sense of empathy.

Another time I was outside the city with some other foreigners, and we got caught in a monsoon rain that was so intense that it flooded the road we were on. We had to pull our motorbikes over at a mechanic shop. The family that owned the shop came out, gave us their umbrellas, and invited us into their home and fed us dinner. None of us could speak Burmese, but that was the type of kindness that didn’t really need any translation.

How did you interact directly with the people served by the two organizations you worked for, especially given the language barrier?

Through two main tasks. For Room to Grow, I conducted needs assessments at the boarding houses, and got to colour and dance with children during therapeutic playgroups. On the days I did those assessments, I had a translator through whom I could communicate directly with the children and the leaders of the boarding houses. I also taught English twice a week to migrant children.

When I wasn’t out in the community, I got to spend time in the Burma Border Projects office. My tasks here ranged from reporting on past projects and editing curriculum to having iced coffee breaks in the one air-conditioned room during the heat of the afternoon. These coffee breaks represent some of my favourite memories in Mae Sot, and not just because of the air conditioning: it was during these breaks that I got to spend time with the Burmese staff, who were some of the most resilient, hilarious, and kindest people I have ever met.

As you know, there is a lot of emphasis these days on the importance of building soft skills. You may also know that international experience is touted as one of the best ways to build such skills. How do you make the link between what you learned and the acquisition of soft skills?

The most impactful soft skill I developed during my co-op placement was a deeper sense of empathy. I don’t think empathy gets the attention it deserves in the broader conversation about soft skills, even though good leaders and good communicators need a strong sense of empathy.

Can you give us a sense of what you did to deepen your sense of empathy?

One of my supervisors in Thailand told me that listening to people is never a waste of time. She was right; I had so many opportunities to listen to people’s stories about having to leave their homes. That kind of life experience was something I knew almost nothing about, so I had to practice actively listening. The stories I heard were so valuable in helping me understand the circumstances that many migrants along the Thai-Burma border face. I feel very privileged just to have had the opportunity to listen.

Guilt by itself doesn’t get anyone anywhere. It has to be turned into a sense of responsibility – a responsibility to find a way to empower people who deserve empowerment.

To be honest, it was hard sometimes not to feel guilty. I would often find myself thinking, ‘I don’t even have my degree yet, so what on earth do I have to offer?’ But then I reminded myself that I was there to learn, and if these two organizations had the capacity to take me on and give me that chance to learn, I’d be very grateful and would try to make the most of the experience.

I also realized that guilt by itself doesn’t get anyone anywhere. It has to be turned into a sense of responsibility – a responsibility to find a way to empower people who deserve empowerment, but who are operating in a society that hasn’t really allowed them that empowerment.

Now that you’re back in Canada, how are you finding ways to act on that sense of responsibility?

The first thing is that I want to keep advocating for the people I met. I find that anecdotes – for example, the story about the family that owned the mechanic shop – are a good way to do that for people in Canada who don’t have much point of reference for a place like Mae Sot. I’m also determined not to portray the people I met as helpless. So often, the story told about people in conflict-ridden parts of the world is that they are helpless. But 99 per cent of them are not helpless. They’re just caught up in circumstances not of their own making, and they’re actually amazing at finding ways to be resourceful.

The second thing I’m doing is consciously pulling from what I learned in my co-op experience and applying it to what I’m learning right now in my classes. I’m thinking of majoring in health sciences, and in one of my classes, we recently studied a theory about the stages of children’s development. When I was at Burma Border Projects, we did a capacity-building session looking at these very same stages and how they connected with what we were seeing with the children we were working with. The Burmese staff provided their observations about the ways the theory was and was not true in their culture. Having this first-hand background made reading about it so much more meaningful.

Burma has faced violations of human rights for decades, and I’ve found that people in my generation don’t hear about it much despite its relevance.

I’ve been making plans to visit high schools and share my experiences. Something I think is pertinent to share with other students is that experiential learning (by doing something like a co-op) can empower in-class learning. If you have a plethora of diverse hands-on experiences, it makes it easier to contextualize your learning in school and make it more meaningful. Another thing I’ll be talking about in high-school classes is the refugee and migrant crisis that Burmese people have been facing for the past 60 years, including the discrimination against the Rohingya people. Burma has faced violations of human rights for decades, and I’ve found that people in my generation don’t hear about it much despite its relevance. A family of eight that was living in a refugee camp right outside Mae Sot moved to an area outside of Vancouver just a few months ago. Through high school visits, I hope that I can help instil a passion for social justice and foreign policy. 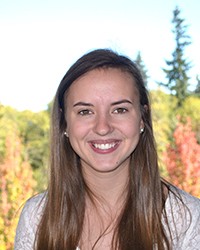 Katrina is a second-year student at Simon Fraser University. She recently completed a co-op term in Mae Sot, Thailand, near the border with Myanmar.