As the hub of Canada’s Asia Pacific Gateway, B.C. is the strategic point for Canada’s commerce with Asia. With nearly 40 per cent of its goods exported to Asia in 2015, B.C. is the most Asia-focused (in terms of trade) of Canada’s provinces and territories. Much of B.C.’s trade with Asia is with China, and with more than C$17.2 billion in goods traded, China is the province’s second-largest trading partner after the U.S.

Although B.C.’s economy is significantly tied with China, data from the Asia Pacific Foundation of Canada’s 2016 National Opinion Poll (2016 NOP) shows that British Columbians are less likely to support signing a free trade agreement with China than the rest of Canadians. With 40 per cent supporting free trade with China, B.C. is six percentage points lower than the national average at 46 per cent. Even though British Columbians understand the importance of China to Canada’s economic prosperity — with 71 per cent indicating it is highly important — they are still less likely to embrace free trade with the second largest global economy. 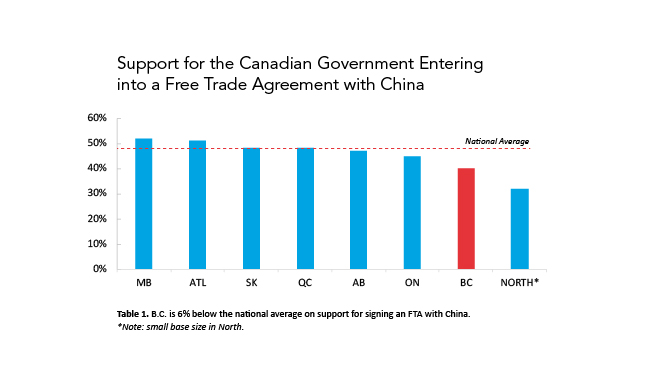 The Bank of Canada’s June 2016 Financial System Review pointed to British Columbia and Ontario’s skyrocketing real-estate markets and prices as imbalanced and unsustainable. As furor over housing prices in B.C.’s largest metropolis reached a fever pitch, many Vancouverites have pointed to purchases of real estate by wealthy Chinese foreign investors as the cause of exacerbating real estate prices.

Whether true or not, 72 per cent of British Columbians believe the Canadian government is allowing too much Chinese real estate investment in Canada. This is 10 percentage points above the national average. 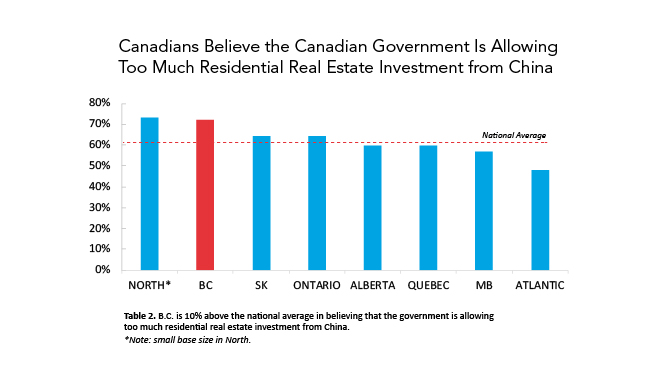 With the Bank of Canada forecasting slow long-term growth in the near future, greater foreign investment could have significant benefits for the Canadian economy. B.C. has always been a highly attractive destination for foreign investments from an economic powerhouse such as China. 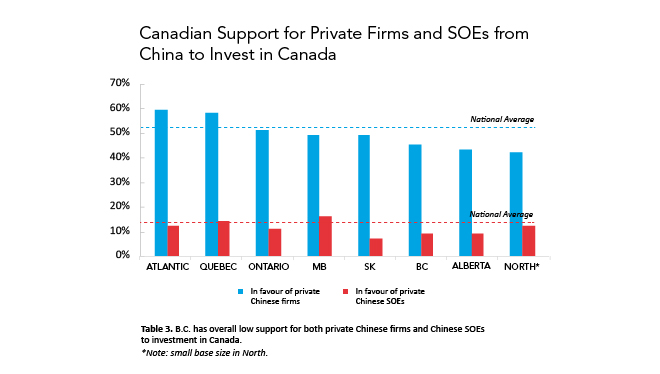 If the provincial government wants to focus on attracting more foreign investment from China, it must grapple with the differences between British Columbians’ perceptional attitudes and the potential benefits this investment can bring to people within the province.

China is B.C.’s second-largest trading partner, and yet there is a gap between British Columbians’ attitudes towards furthering economic relations with China and China’s economic importance to the province. With China’s growing importance in the Asia Pacific, B.C. will need to find a way of addressing this gap. 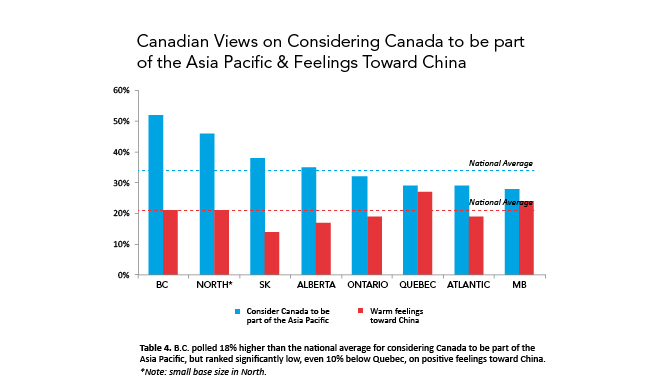 Despite the gap, however, B.C. still ranked the highest among provinces in considering Canada to be part of the Asia Pacific. B.C. has proven a strong attachment, whether through trade, immigration, or other channels, with Asia. 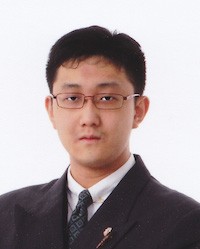 Ryan Li is a recent Junior Research Fellow at the Asia Pacific Foundation of Canada and former Mitacs- and University of British Columbia-funded researcher at Tsinghua University on Chinese primary market policy.