During my year in Beijing, I saw its streets getting flooded with yellow and orange bicycles. In retrospect, I was witnessing a historical moment—that is, when ofo and Mobike, the two giants of Chinese bike-sharing schemes, began their market expansion. Today, ofo and Mobike together are valued at about US$2 billion. Dubbed “Uber for bicycles,” these bike-sharing schemes are now engaged in aggressive, large-scale expansion campaigns, both domestically and internationally, making it into the Western media every other day. But bike sharing or rental services have always existed—what’s the big deal with these new Chinese bike-sharing schemes?

First, these services are incredibly convenient. ofo and Mobike offer ‘dockless’ services, which means that these bicycles can be picked up and parked anywhere. Imagine this. You want to get to Broadway-City Hall Station from a café in Mount Pleasant—let’s say about 800 metres away. You could walk, bus, or take a cab. But instead, you pull out your phone and check the ofo map, which shows a number of available bicycles, tagged with GPS devices, near you. After finding a bike, you scan its QR code or type the serial number, and voilà, the lock gets unlocked. You ride to the station, lock the bike, end your service on the phone, and just walk away. Easy. This is the ‘convenience’ feature that has captivated millions of riders in China.

However, it’s worth noting that the convenience of these Chinese ventures has been complemented, if not achieved solely, by their massive scale, which has been possible because of the size of the Chinese market. In major Chinese cities, the streets are literally flooded with these shared bicycles, and in my personal experience, there was always an ofo bike to use anywhere I went. After all, there are nearly 2.4 million shared bicycles in Beijing. The economy of scale in the Chinese market has also made it possible for the start-ups to maintain their affordability (a ride costs 1 or 2 RMB per hour, roughly C$0.19 or C$0.38). 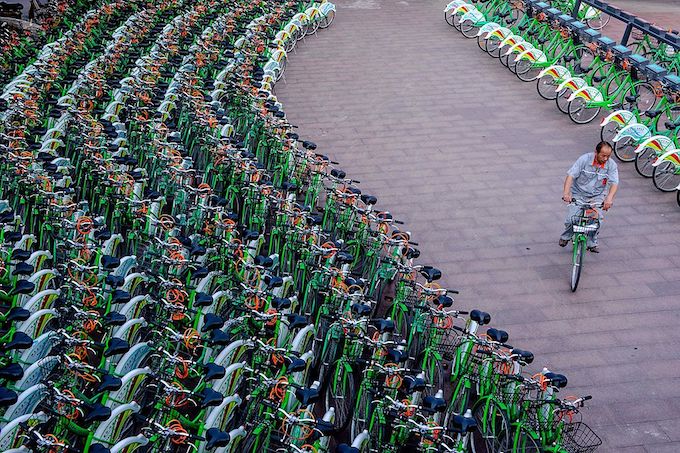 These two factors have made bike-sharing schemes a big hit in China. These schemes have also marketed themselves as the solution to traffic problems in China, where car ownership has spiked drastically in recent years. A recent report by Gaode Maps, the Chinese Academy of Transportation Sciences, and the Tsinghua-Daimler Centre for Sustainable Transportation, revealed that local traffic conditions in 80 per cent of Chinese cities have improved in the second quarter of 2017.

ofo started dropping its signature yellow bicycles onto university campuses in the U.S. and the U.K. last year, and has 6,000 bicycles operating in Singapore. It plans to operate in 20 countries outside China by the end of the year, focusing on Japan, Spain, France, Germany, and the Philippines. In September, ofo started its operations in London, bringing 200 of its bicycles.

Similarly, Mobike officially launched its UK campaign in June, dropping 1,000 bicycles in the streets of Manchester. Also, in a fascinating turn of events, Mobike just announced a partnership with AT&T and Qualcomm as part of its full-fledged global campaign.

Things are clearly heating up in the world of shared-bicycle schemes—and it suggests that what we have seen is just the beginning.

ofo and Mobike in Vancouver?

At the moment, we have Mobi, or the “Shaw bicycles,” in Vancouver. It started its operation in mid-2016, and as of July 2017, there are 1,200 bicycles and 122 stations. However, there a few key differences from the Chinese bike-sharing schemes. First, these are not dockless services; bicycles have to be picked up, and parked at designated stations. Also, Mobi, which has been operating with C$5 million funding from the City of Vancouver, cannot be compared to ofo and Mobike in terms of scale. ofo and Mobike have a much larger war chest, funded by the likes of Tencent and Alibaba, which has made it possible for them to offer competitive pricing and thereby edge minor competitors out.

Could we still expect to see ofo and Mobike in Vancouver anytime soon? In my opinion, it’s not so much a question of if, but of when. Vancouver, with its bike-friendly municipal regulations and moderate weather, is one of the bike-friendliest cities in Canada, ranked third after Montreal and Saskatoon. Also, it has been named one of the healthiest cities in the world, with a large population that is known for pursuing active lifestyles. In July 2017, there were approximately 187,000 bike rides (that is, approximately 6,000 every day) across Burrard Bridge. 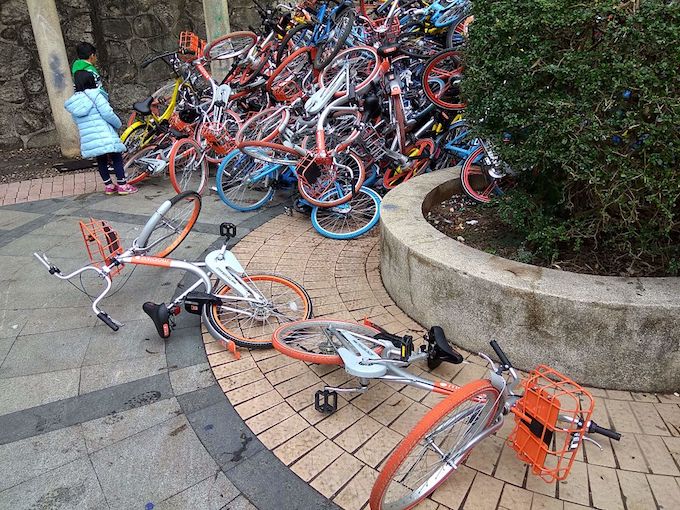 First and foremost, we should consider some of the challenges created with these bike-sharing schemes. While the dockless feature of these services has been a key factor in their success, it has also created a problem for municipal authorities and citizens. More specifically, hordes of colourful bicycles parked—or abandoned—all over the city have become a major problem to the extent that the Beijing Municipal Transportation Commission just banned the introduction of more bicycles by shared-scheme services. In Shenzhen, more than 500 bikes have been left piled up, creating an uproar among locals. How will we engage with these bike-sharing schemes in terms of regulation, and do we have adequate infrastructure (e.g. parking spaces, abandoned bike disposal, etc.) to make these services viable?

There is a sense of inevitability with these bike-sharing schemes that is very similar to the Uber craze from a few years ago. Over the weekend, when one of my classmates shared a picture of an ofo bike he had found in the streets of Seattle, my other friends in London responded with more pictures of similar yellow bikes they found in England. Surely, it is only a matter of time before ofo and Mobike make it into the headlines in major Canadian cities.

We need to think ahead—and consider the implications of having these bike-sharing schemes, the 800-pound gorillas of the global bike-sharing market, marching into Vancouver with large war chests. Instead of approaching this issue as a yes-or-no problem, the City should think of innovative ways of ‘localizing’ these services to best mitigate the challenges and take advantage of the opportunities for improving the quality of life of Vancouverites. For example, the City could facilitate an incentive program between these services and local facilities and businesses (e.g. TransLink, Earnest Ice Cream, Taco Fino, etc.) to facilitate bike parking.

This biking-sharing bubble might well burst and we won’t have to worry about these pesky bicycles in a few years, but it’s a worthwhile thought experiment for the very near future; things happen very quickly nowadays (both companies took off within the last year). But more importantly, the rise of bike-sharing schemes in China is yet another reminder for policy-makers and citizens that the global ‘share economy,’ which has profoundly affected our lives during the past few years, is here to stay, whether it’s in the form of a bicycle or something else that we haven’t yet imagined.