Celebrating Friendship Across the Pacific: The 50th Anniversary of the Burnaby – Kushiro Sister City Relationship

This year marks the 50th anniversary of the sister city relationship between Burnaby, British Columbia and Kushiro, Japan. The agreement was a first for these two cities and the third twinning agreement between Canada and Japan. It now represents one of three sister city agreements for Kushiro and one of four for Burnaby, and is one of almost 150 such agreements across Canada. 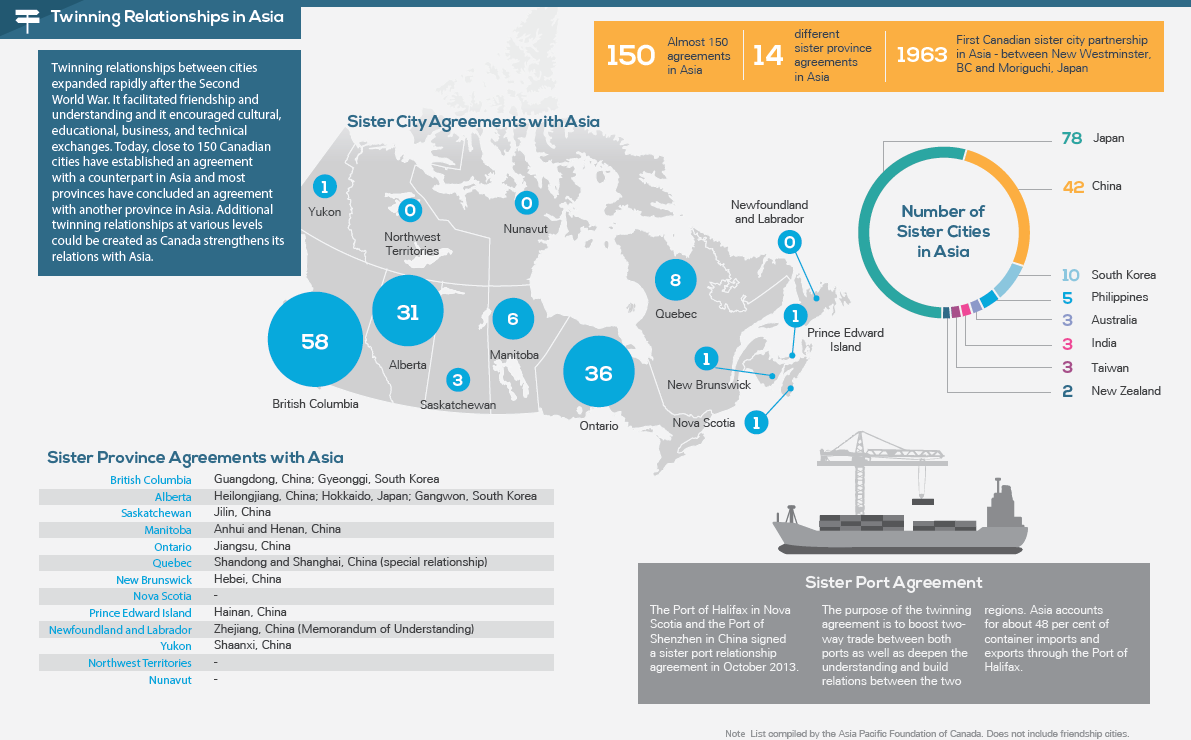 In 1963, the Canadian Ambassador to Japan introduced to the Mayor of Kushiro the idea of a sister city agreement with Burnaby. Kushiro and Burnaby are both Pacific cities located in almost the same latitude, with similar form and scale. In September 1965, Mayor Yamamoto Takeo of Kushiro visited Burnaby upon the official invitation Burnaby Mayor Reeve Alan Emmott. The documents for the sister city arrangement were written and signed at Burnaby City Council. The two cities have since held numerous political, businesses, cultural and educational exchanges. 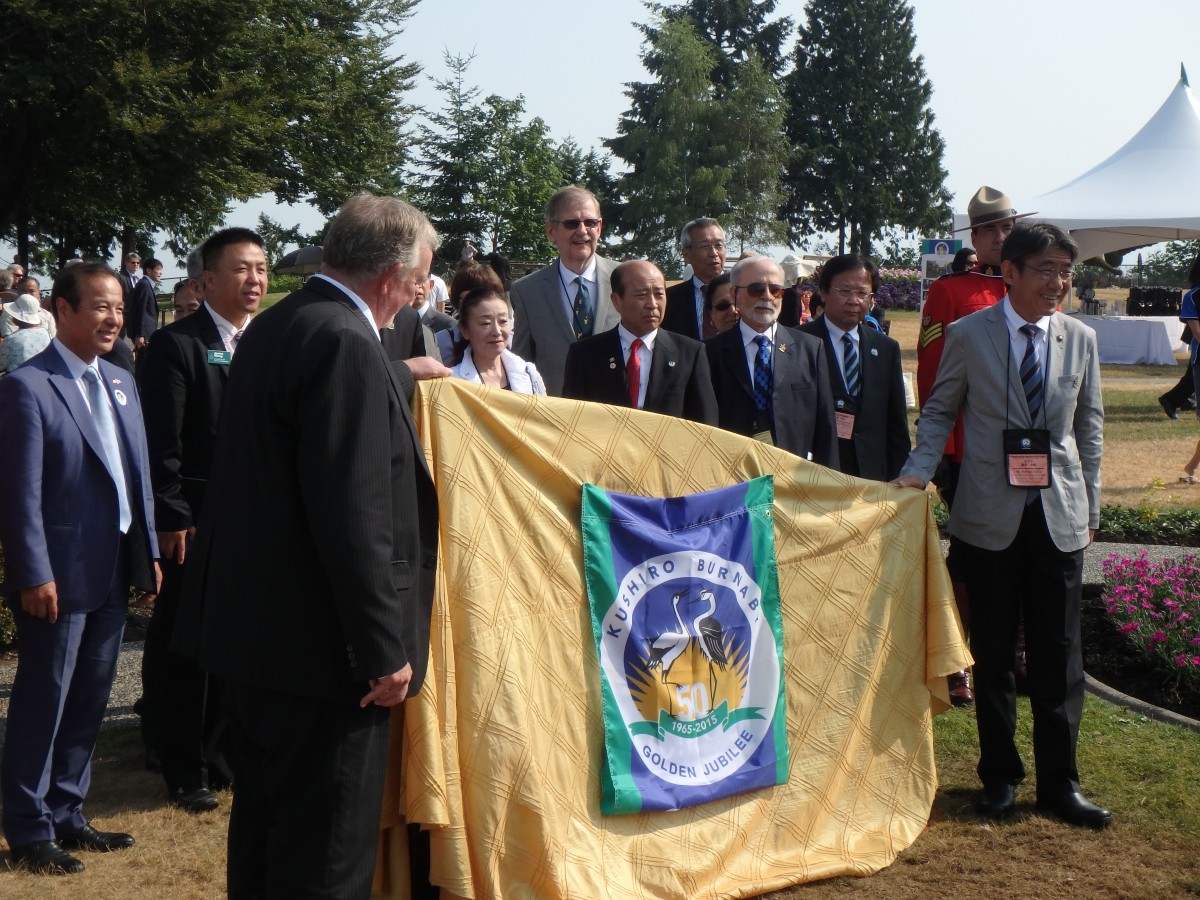 As part of the 50th anniversary celebrations, Burnaby hosted a delegation from Kushiro from July 7 to 11. The Nikkei Centre is planning some cultural activities and the 2015 Nikkei Matsuri, a family-friendly Japanese festival, will highlight the anniversary in its September 5 to 6 programming.

Poised atop Burnaby Mountain overlooking the Lower Mainland is Kamui Mintara, or ‘The Playground of the Gods,’ a large sculpture built to commemorate the 25th anniversary of the sister city relationship between Burnaby and Kushiro.

Had the sister city relationship not been in place it is unlikely that Toko Nuburi, a renowned Ainu wood carver from Kushiro, would have bestowed such a grandiose sculpture upon the city. Kushiro Mayor Wanibuchi Toshiyuki invited Toko to participate in the 20th anniversary exchange. Toko presented some of his carvings to Burnaby officials and joined the organized tours to places like Stanley Park, Queen Elizabeth Park, and Simon Fraser University. It was at the mountain top university that Toko broke away from the delegation to walk the nearby park grounds. He ended up at a place on the west side of Burnaby Mountain Park overlooking Burnaby, downtown Vancouver, Stanley Park, and Lion’s Gate Bridge. The view touched Toko and he later proposed to the mayor of Burnaby his concept of a large wood sculpture on that location to commemorate the friendship and goodwill between the two cities facing each other across the Pacific.

“It is because I am the Ainu myself and a man that I carve. I do want you to understand through my carvings the ways of thinking, living and ideas of the Ainu people who have been living with the gods, and loved peace, living things, human beings and nature. Carving is my language and Yukar [Ainu epic story songs]. It is a poem of love.”  – Toko Nuburi (1937-2014)Toko, an internationally renowned indigenous Ainu entrepreneur and wood carver, owned an art store in Kushiro for more than 25 years and had previously commissioned works in Japan, Finland, Sweden, Denmark, and France.

Burnaby provided Toko with over 20 large logs and a place to carve his totems at the Burnaby works yard. Toko and his son, Shusei (with the assistance of the City of Burnaby carpenter Phil MacGregor),  began the work in fall 1989, unveiling the first installment of Kamui Mintara in a ceremony with Mayor William Copeland and Union of BC Indian Chief’s President Chief Saul Terry in December.

Dedicated to the people of Burnaby, Kamui Mintara consists of 25 large totems – and a total of over 100 logs – that symbolize the friendship between the two sister cities and abstractly represents the close association among the Ainu, the gods, animals and earth.

The City of Burnaby continues to maintain and conserve Kamui Mintara for the enjoyment of the general public. 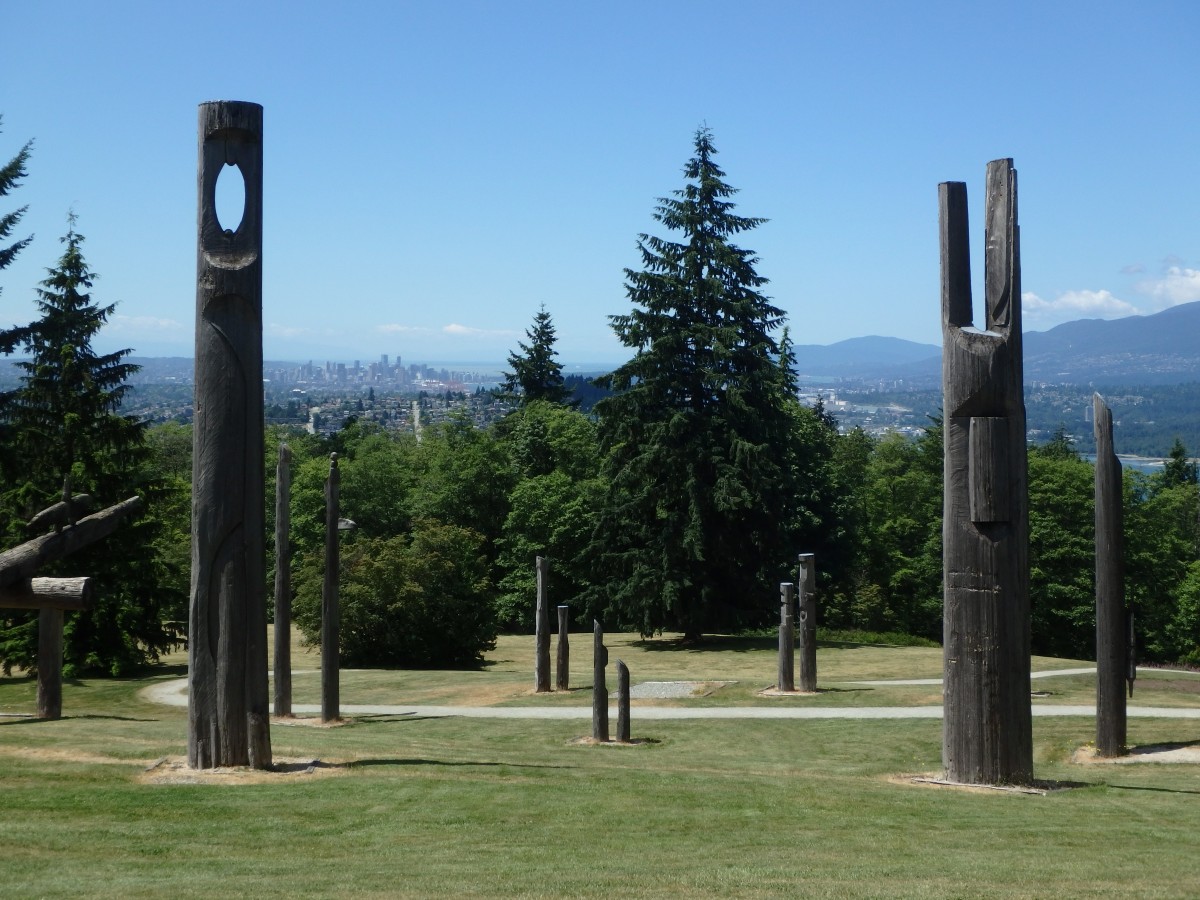 Four dispersed sculptures on the lower terrace represent various forms of Orca free to roam the sea. The “Gateway to the Ocean” (Umi no mon) consists of an orca resting atop four poles positioned on a flat terrace (currently undergoing conservation work) so that viewers can approach it from all sides, with no gates or barriers, similar to an the orca in the ocean. 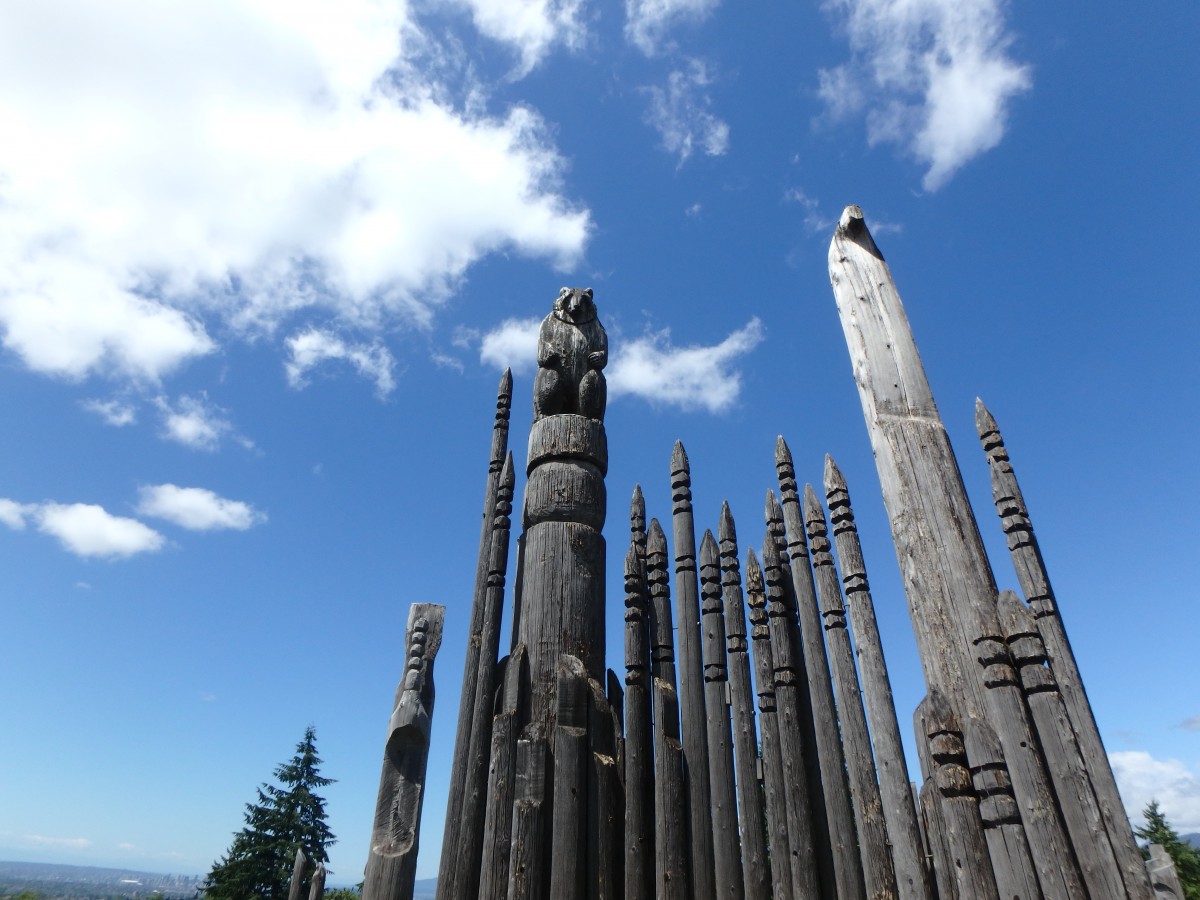 The cluster of totems in the foreground (Kamigami to tomoni/ “Gods and People Together”) sits in front of a few evergreens and announces the entire formation and blends in with the tree line on the North Shore. It represents the close relationship between the gods and Ainu. The smaller poles or humans are intertwined with the larger poles that represent such gods as the bear (mountain god) and owl (the protector of the village). 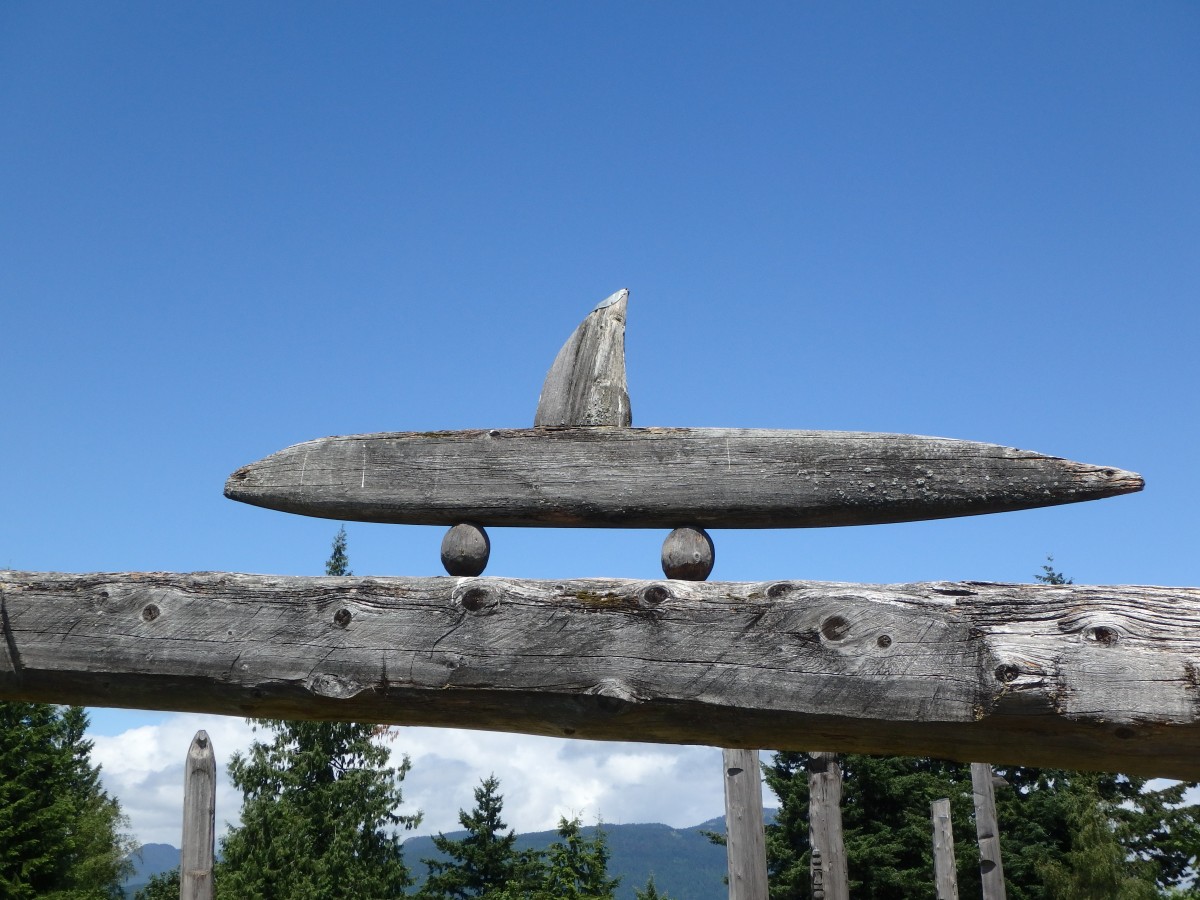 “The Direction” points horizontally westward toward Lion’s Gate Bridge symbolizing a bridge across the Pacific toward Japan and the close connection between the two cities. Other poles represent the birds that chatter to guide Ainu to where deer gather, the woodpecker who taught them to build boats, and the Elm tree god, which provided fibers for clothing.

History and Future of Twinning

The early Cold War years served as a backdrop to the idea of beginning a program of sister city (also called twinning) agreements. On September 11, 1956, President Eisenhower gave a speech at the White House announcing the creation a “people to people program” to counter Cold War tensions. Establishing formal political and cultural contacts between distant cities aimed to encourage friendship, peace, and understanding through trade, tourism, and cultural and political exchanges.

Canada began signing twinning agreements with Asian cities in the 1960s, but the heyday of these agreements coincided with a waning of Cold War tensions in Asia in the 1980s and 1990s. The goal of increasing cultural and economic exchange between cities, however, was not always realized. Without sustained community and political commitment on both sides of the Pacific many of these agreements have become largely inactive. And pundits have argued that public money and resources could be better used supporting internal city projects.

Recently, some jurisdictions have addressed this concern head on and support twinning as a means to increase strategic business links. An example of this is the Government of British Columbia’s 2007 “BC / Asia Twinning Toolkit” that came out as part of the province’s Asia Pacific Initiative. The toolkit is a guide for pursuing new sister city agreements and for vitalizing existing partnerships, in the hope of deepening business opportunities. Arguments in support of such agreements talk about how economic benefits and trade depend on establishing long lasting, dependable and trustworthy relationships—which is especially important in Asia.

Educational, cultural, political and sports exchanges, while being the most common and measurable component of such agreements, provide innumerable opportunities for local businesses to creatively and strategically build upon. For example, becoming involved in a twinning program offers potential for gaining new business, infrastructure and industry investments; escalating sales by targeting particular tourist audiences; building new start-ups with Asian partners; acquiring new market intelligence and knowledge; and, increasing industrial, economic and market diversification. Canada’s nearly 150 sister city and 14 sister province relationships across the country with Asian counterparts are a potential tool that entrepreneurial businesses and community members interested in entering or expanding in Asia should look at leveraging.

• Birth of Burnaby Cup, Kushiro Cup. Prof Takayoshi Makino (Hokkaido University of Education, Kushiro), travels to Burnaby with 16 students, and presents a trophy from Mayor Wanibuchi to Mayor Bill Lewarne. The trophy has been used each year since to honour Burnaby’s Outstanding Citizen of the Year. Mayor Lewarne proposed to Kushiro that a similar cup be awarded to outstanding citizens in Kushiro.

• A 12-person delegation from Burnaby visits Kushiro in celebration of the 25th anniversary of the sister city agreement. The two cities renewed the Exchange Affiliation agreement.

• A 96-member citizens delegation from Kushiro, including Mayor Yoskitaka Ito, visits Burnaby to celebrate the 40th anniversary of the sister city agreement (June 2005)