Famed for the Bund, the Oriental Pearl Tower, and its maglev rail system, Shanghai is a major international tourist destination. It is also an economic powerhouse, partly as a result of being the recipient of vast amounts of foreign direct investment in the finance sector and possessing one of the busiest ports in the world. In November of 2018, Shanghai topped the Forbes China Ranking of Best Cities for Living. However, its prosperity comes with a cost.

Framework of the Problem

The city is facing a severe problem with waste water. In 2017, the then Ministry of Environmental Protection (now the Ministry of Ecology and Environment) found that only 22 percent of water monitoring stations in Shanghai had water suitable for drinking [1]. As shown on the China Eco-City Tracker’s data visualization, between 2013 and 2017 Shanghai consistently had one of the highest percentages of polluted surface water, total waste water discharged, and residential chemical oxygen demand (COD) emission compared to other directly administered municipalities and provincial capitals in China.

COD measures the oxygen needed to decompose organic matter. A high COD implies that bacteria responsible for breaking down organic matter will threaten the survival of fish and other aquatic life by competing against them for oxygen.

Shanghai’s water pollution problem is an obstacle to government-mandated water and ecological conservation efforts in the Yangtze River, and aggravates the decline of China’s fish supply. The city’s waste water problem can be traced to three factors:

1. An outdated drainage system in desperate need of reform. 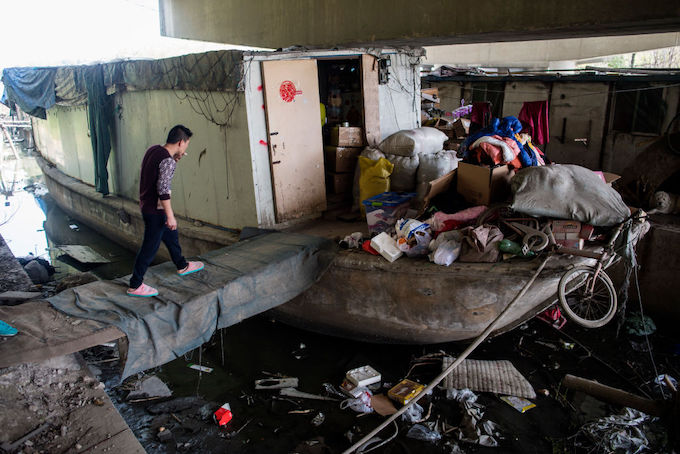 This picture taken on April 2, 2017 shows Sun Xiangji walking near his boat on the riverbanks of Xinchapu river in Shanghai, where nearly 500 small- and medium-sized waterways in and around the city are part of a nationwide anti-pollution drive. Officials have faulted the Xinchapu river-dwellers for discharging raw sewage into the water, raising fowl on the riverbanks, and building illegal structures.  | Photo: Johannes Eisele/AFP/Getty Images

The result is that large quantities of untreated waste water are discharged into rivers in Shanghai and into the East China Sea, contributing to water pollution in the region. The flaws in the system are considered by the current Chief of Shanghai’s Water Authority to be quite severe. Fortunately, the Water Authority has been taking effective action to address the problem, converting more than half of the affected drainage pipes to a segregated sewer system by April of 2018.

2. A lack of WWTPs that can meet the highest treatment standards.

By the end of 2016, only four percent of Shanghai’s waste water treatment capacity met the top tier of standards set by the Chinese government. There is also the issue that WWTPs are inconsistent in the treatment of contaminants. Some WWTPs in Shanghai can only effectively treat a contaminant like total bacteria count,  but not COD [2].

3. Pollution problems caused by the physical geography of Shanghai.

Shanghai is situated at the lowest reach of the Yangtze River. One implication of this is that Shanghai ends up receiving the river pollution from upstream regions. This is compounded by Shanghai being part of a plain river network with a flat topography, meaning that the flow of waste water is particularly slow and will remain in the area for an extended period of time. Even if Shanghai was successful in treating locally produced waste water, it would still have to deal with the waste water discharged by upstream cities. 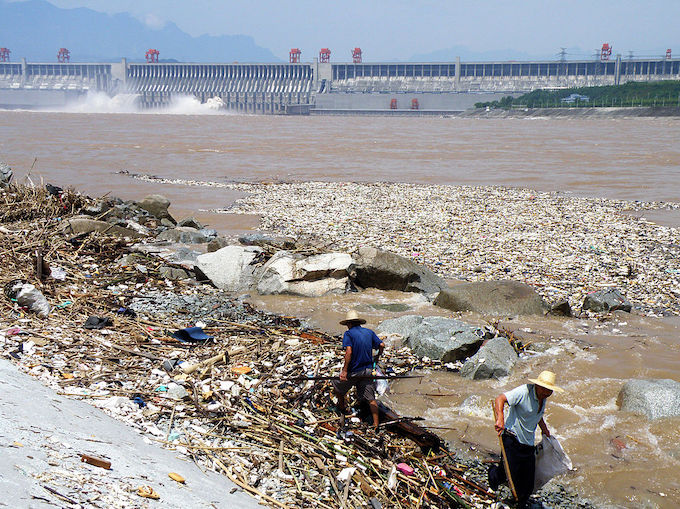 Two workers clean up trash along the bank of the Yangtze River near the Three Gorges Dam in Yichang, in central China's Hubei province in this 2010 photograph.  |  Photo: STR/AFP/Getty Images

Delays to reforming Shanghai’s drainage system and no reduction in waste water discharged from upstream cities will not only worsen the city’s water pollution problem, but also further pollute the Yangtze River and East China Sea. Municipal efforts in dealing with the combined sewerage problem, which began as early as 2010, were delayed by a dispersion of responsibilities within the government. Concentrating resources for key actors would help prevent further delays in fixing the problem. Additionally, the creation and enforcement of penalties for improper disposal of waste water need to be strengthened.

Shanghai’s geography is difficult to change. An optimal way to deal with the geography problem would be to compel upstream cities to clean up their act with regards to water pollution. This could be done via incentives designed by the central government to reward co-operative environmental action undertaken between cities along the Yangtze River. However, inter-city networks in China are underdeveloped, and effective results from ad-hoc inter-city co-operation have been limited to transportation infrastructure [3]. Highlighting key common environmental interests attached to severe economic repercussions may be necessary for inducing upstream cities to reduce their water pollution.

Improving the standards used by the city’s WWTPs could be made an easier task with foreign cleantech intervention.

Canadian cleantech businesses have already demonstrated that they have innovative solutions to waste water treatment. An electrochemical reaction treatment system developed by Vancouver-based Axine Water Technologies allows for onsite treatment of waste water, eliminating the need for its U.S. client to transport large volumes of heavily contaminated waste water to a remote facility. 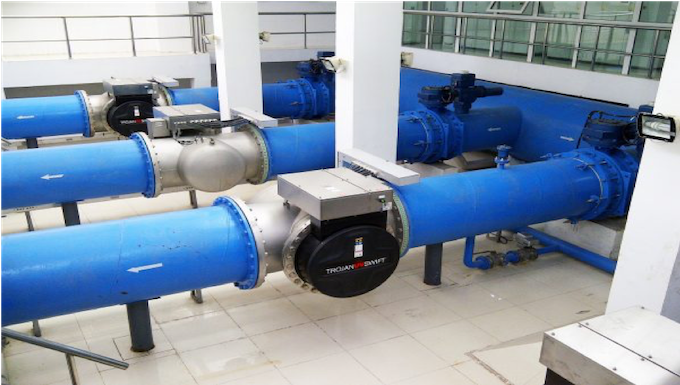 In research, Saltworks Technologies, a Richmond-based company with advanced membrane technology established a foothold in Nanjing’s International Water Hub in 2018, which is dedicated to international research and development in water technology. The company plans to use that presence to launch Chinese pilot projects in waste water treatment.

There is clearly room for further Canadian expansion in the Chinese cleantech market. Canada can use this opportunity to show that it has a keen interest in the continued development of practical solutions for tackling environmental issues, and the application of those solutions to water problems both at home and abroad.

[1] Webber, Michael, et al. “Chapter 2: The People of Shanghai and Their Use of Water.” Water Supply in a Mega-City A Political Ecology Analysis of Shanghai, Edward Elgar Publishing, 2018, pp. 31–32.

[2] Webber, Michael, et al. “Chapter 2: The People of Shanghai and Their Use of Water.” Water Supply in a Mega-City A Political Ecology Analysis of Shanghai, Edward Elgar Publishing, 2018, pp. 32–35. 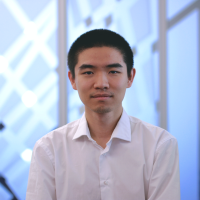 Henry Shum is a Junior Research Scholar at the Asia Pacific Foundation of Canada and a graduate of the Master of Public Policy and Global Affairs program at the University of British Columbia. He is also a University of Toronto alumnus (BCom’ 16).