As this year's Lunar New Year festivities came to a close, China’s National Bureau of Statistics released new stats on developments in China’s economy in 2015. There are a few key trends that will be of particular interest to energy watchers.

This decline was driven by a number of factors, including lower rates of economic growth, increases in use of non-fossil fuels for power generation, and a gradual shifting in the economy from high energy intensity industries to the services sector. Demand for electricity rose only 0.5% in 2015 (down from 3.8% in 2014) while grid-connected wind energy increased 33.5% and grid connected solar increased a whopping 73.7%. Cement and steel production, which alone accounts for a quarter of China’s coal demand, declined in 2015.

Second, natural gas demand in China grew only 3.3% in 2015. For most of the 2000s, China experienced extremely high growth in natural gas consumption (17.4% in 2013 for example). In 2014, however, gas consumption growth declined by almost half. This slowdown is attributed to slower economic growth as well as pricing reforms that resulted in high domestic gas prices relative to substitutes. In order to stimulate demand, the NDRC significantly lowered gas priced for non-residential users twice in 2015.[1]

Finally, in the area of energy efficiency, the National Bureau of Statistics reported that the amount of energy consumption per unit of GDP declined by 5.6%. In the coal industry, the amount of coal required to generate one kilowatt hour of power decrease by 0.95%, while the energy consumed per tonne of steel and cement production decreased 0.56% and 0.49% respectively. 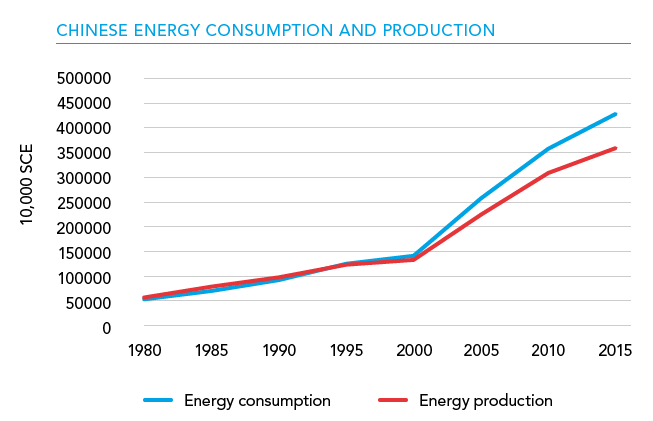 Energy predictions are always tricky, but it is likely that this slower energy demand growth is China’s “new normal.” The statistics reflect trends that are moving China towards a greener economy, an objective that government will highlight in the soon to be released 13th Five Year Plan.

For more analysis and infographics on energy and environment issues in China, click here.