On this day last year, April 25, 2015, a powerful earthquake devastated Nepal. The tremor was also felt in China and Bhutan, and as far away as the State of Karnataka in India, over 1,200 km to the south. At the epicenter the ground shook for almost a minute. This happened near Nepal’s most densely populated area and resulted in the worst calamity to strike the country in more than 80 years: 5.6 million people were affected, some 15,000 were injured, and over 8,000 were killed.

Disaster researchers analyze risk as a combination of hazard and vulnerability. On one hand, the seismic hazard was looming over the landlocked mountainous area and geoscientists were aware a major quake was due; they just did not know exactly when or where it would hit. On the other hand, the local society was highly vulnerable: Nepal has long been plagued by widespread poverty, rapid and ill co-ordinated urbanization, and weak adherence to building codes. The country has recently come out of a long civil war and the yearly per capita income is approximately US$1,350, one of the lowest levels in the world. This partly explains why construction regulations were not enforced. This vulnerability, unfortunately, is common across the Asia Pacific.

The Asia Pacific Region Continues to be Highly Vulnerable

Between 2005 and 2014, the Asia Pacific had 1,625 reported disasters that killed approximately 500,000 people and affected another 1.4 billion. Related economic damages are estimated at around US$523 billion. And this is a conservative figure: the majority of disasters in the region were not counted because they killed less than 100 people. Cumulatively, these smaller events are believed to have affected at least 2.2 billion people.

Today, there are 772 million people across the Asia Pacific living on less than US$1.25 a day who are particularly vulnerable to disasters. The United Nations explains that these at-risk populations “tend to live in low-value, hazard-prone areas – not just city slums, but also steep slopes, seismic zones, floodplains and river banks or remote areas.”[1] The UN also deplores that most international aid for disasters goes to emergency response rather than prevention.[2] That said, investing in disaster risk reduction is extremely cost effective. For example, investments in early warning systems in Asia and the Pacific “can have returns between four and 36 times the initial investment.”[3]

In 2015, the Asia Pacific region continued to be the world’s most disaster prone area, accounting for 47 per cent of total disasters, and for 64 per cent of total global fatalities. Sadly, these troubling trends are expected to continue. The UN explains that “approximately 742 million city dwellers in the region are at ‘extreme’ to ‘high’ disaster risk – often living in multi-hazard hotspots that are vulnerable to cyclones, earthquakes, floods, and landslides. This vulnerable population is projected to increase to 980 million by 2030.”[4]

When Will the Next Hazard Hit the Asia Pacific?

The Indian capital, Delhi, also felt last year’s Nepalese earthquake; it was only 750 km away from the epicenter. The Indian megacity has over 16 million inhabitants and, according to 2011 census data, 90 per cent of its buildings are what is called “unreinforced masonry,” which is the most dangerous kind of construction in an earthquake. This vulnerability is compounded by the fact that large portions of this metropolis are built on very soft soil which will “amplify the seismic waves and their damage-causing potential.”[5] The reinsurance giant, Swiss Re, underlines that there is a very high likelihood of an earthquake hitting Delhi. Authorities in India and across the region must invest in disaster prevention by enforcing the use of better building codes, as well as educating citizens about risks and better ways to prepare for hazards. Furthermore, the spread of telecommunication innovations across the Asia Pacific, such as smartphones, carry many risk reduction opportunities that must be harnessed, because just like in the case of Nepal, experts know a major calamity is going to hit the region again; the only question is when. 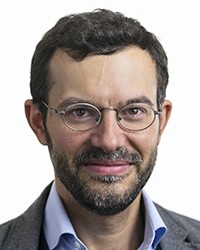 Justin has a PhD in geography. His interests focus on socio-economic inequalities, disaster risk reduction, and the use of mobile telephone innovations.

Disasters and Mobile Phones in China