During Prime Minister Justin Trudeau’s trip to Beijing in December 2017, the Canadian media once again drew fire for their coverage of China. The Communist Party-run Global Times lashed out at Canadian reporters for their alleged feeling of “superiority and narcissism.”

The public feuding between Canadian journalists and Chinese officials draws attention to coverage of China in the Canadian media. In a recent piece published by Canadian Foreign Policy Journal, we took a close look at Canadian print media reporting on China and Japan over a 16-year time span. Here, we provide a brief synopsis as it relates to China and partial answers to a few key questions: Are Canadian print media “fair” to China? Or do they treat China with prejudice, only capturing negative news while ignoring any positive progress?

Canadian Coverage of China: Why Does it Matter?

The recent public tension between Canadian journalists and Chinese officials represents more than a temporary moment of frustration. It would seem that China cares about global perceptions of its government, its economic viability, and its position in the global community, as made apparent by the time and resources China devotes to improving its image. Like all countries, it appears that China protects its image not only out of national pride but also because likeability is a form of “soft power,” making it easier to conduct business across borders and pursue strategic objectives.

Yet, the question remains: How does print media coverage affect Canadians’ image of China, and why does that matter? Though academics still debate how much public opinion matters to foreign policy, at the very least, there is evidence that public opinion can constrain the decision-making of policy-makers in key areas such as military intervention and trade, and that negative press and subsequent public reaction might be a factor influencing government decision-making.

One argument has it that, given their position as a dominant source of information about political affairs, the media play a significant role in shaping public opinion, particularly as it relates to foreign policy – an area wherein few people have much personal experience or formal training. Ultimately, as this argument goes, what the media decide to publicize not only promotes public awareness, but also prioritizes issues and can reinforce or even amplify stereotypes.

But on the contrary, the relationship between the public, the media, and policy-makers is not a tidy affair. It is multidirectional and often inconsistent. At times, the media influence public opinion directly, and policy-makers take note of those preferences. Other times, the media simply reflect the current state of affairs and leave the direction of public perceptions to opinion leaders such as politicians or dominant economic figures. Yet, even in these cases, the public relies on the media for cues from elites to form their own opinions, while policy-makers depend on the media as a means to gauge public opinion and trends in society, as well as to engage the public.

What do Canadians Think About China?

So, what, exactly, are Canadians learning about China through the media? Is the portrayal even-handed, or does it focus squarely on “bad news” or sensationalist accounts of negative events? Certainly the Canadian coverage of China has had its critics. Professors Paul Evans and Wendy Dobson argue that “negativity can feed on itself,” generating public ambivalence toward China that encourages caution by political leaders. In a broader look at Western media coverage of China, professors Lars Willnat and Yunjuan Luo argue that coverage of China is “one-dimensional,” focusing on human rights abuses and the country’s increasing global power. Former Prime Minister Pierre Trudeau, for his part, was known to complain about the “absurdities” reported in the Canadian media about China.

The 21st-century drive to improve China’s image has produced mixed results, with public opinion in some regions trending in a clear pro-China direction. However, this effort has yet to bear fruit in Canada. The Asia Pacific Foundation of Canada (APF Canada) has been tracking attitudes toward China for more than a decade. Overall, Canadians remain a critical bunch. For example, based on a 2012 poll conducted by APF Canada, the top five attributes Canadians identified with China included “authoritarian” (45 per cent), “growing” (42 per cent), “corrupt” (37 per cent), “threatening” (34 per cent), and “strong” (30 per cent). Compared to their favourability ratings of other countries, Canadians have relatively “cool” feelings toward China. A Canadian population that leans heavily toward supporting free trade agreements has tended to tilt against such an agreement with China. 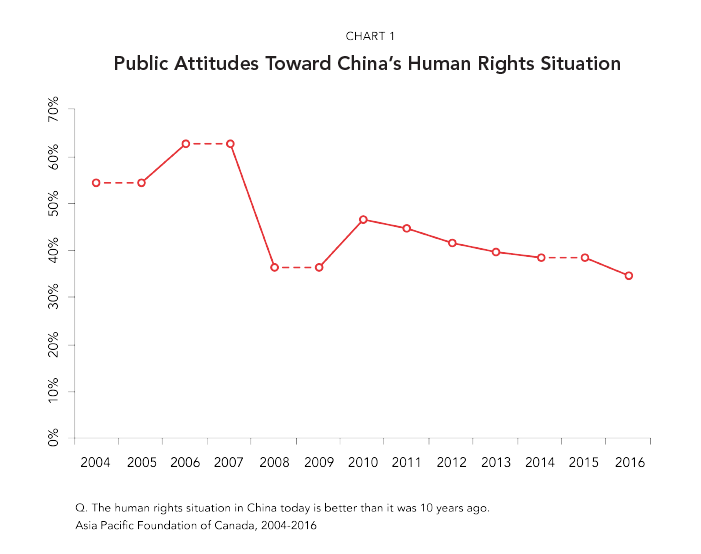 The trends show China’s image has not been improving on a range of measures. In 2004, APF Canada began asking whether Canadians agreed that “The human rights situation in China today is better than it was 10 years ago.” From 2006 to 2016, agreement fell from 63 per cent to 35 per cent. A second indicator asking whether China provides more of an economic opportunity than a threat has been stagnant since dropping from a high of 60 per cent in 2008. 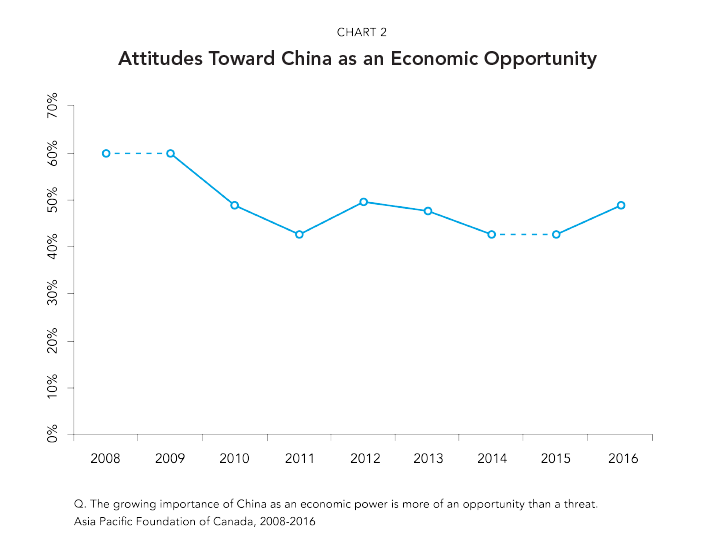 The polls tell an obvious story: Canadians remain skeptical of their economic and political relationship with China. Is Canadian print media coverage at the root of this skepticism?

While the Canadian media are often recognized as an important factor in Canada-China relations, there has been little systematic analysis of the type of information to which Canadians are exposed in the media. To help shed some light on the issue, we analyzed coverage of China in three of Canada’s major newspapers (the National Post, the Globe and Mail, and the Toronto Sun), encompassing over 30,000 newspaper articles published between 2000 and 2015.

We categorized our database of articles into 12 predominant themes, which allowed us to identify what gets covered, with what frequency, and how coverage changed over time. The themes are: automotive; culture and history; disaster; economic; environment; financial markets; government; industry; political rights; resources; security; and, trade.

China-related news experienced a sharp increase in overall Canadian media coverage between 2003 and 2005, before levelling off and remaining stable until 2015. 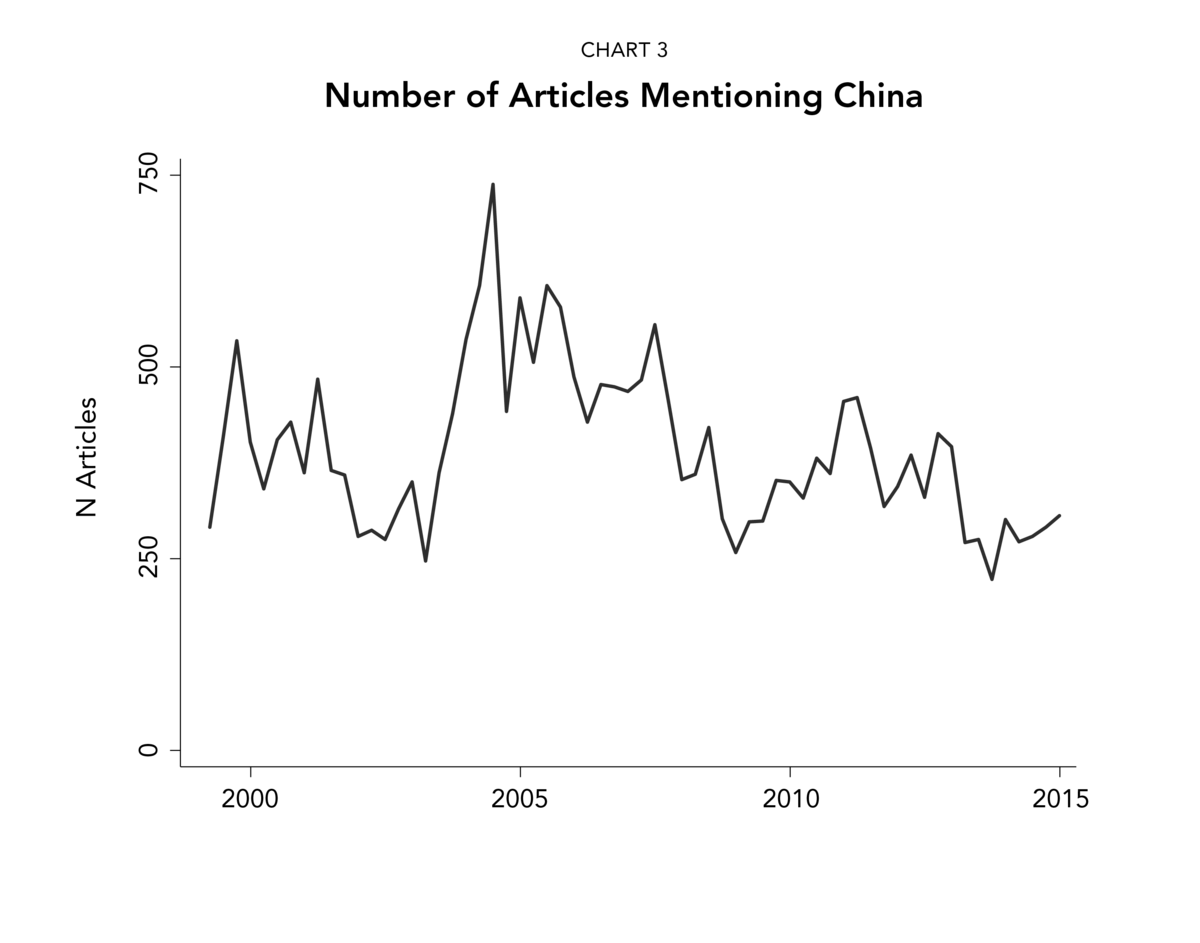 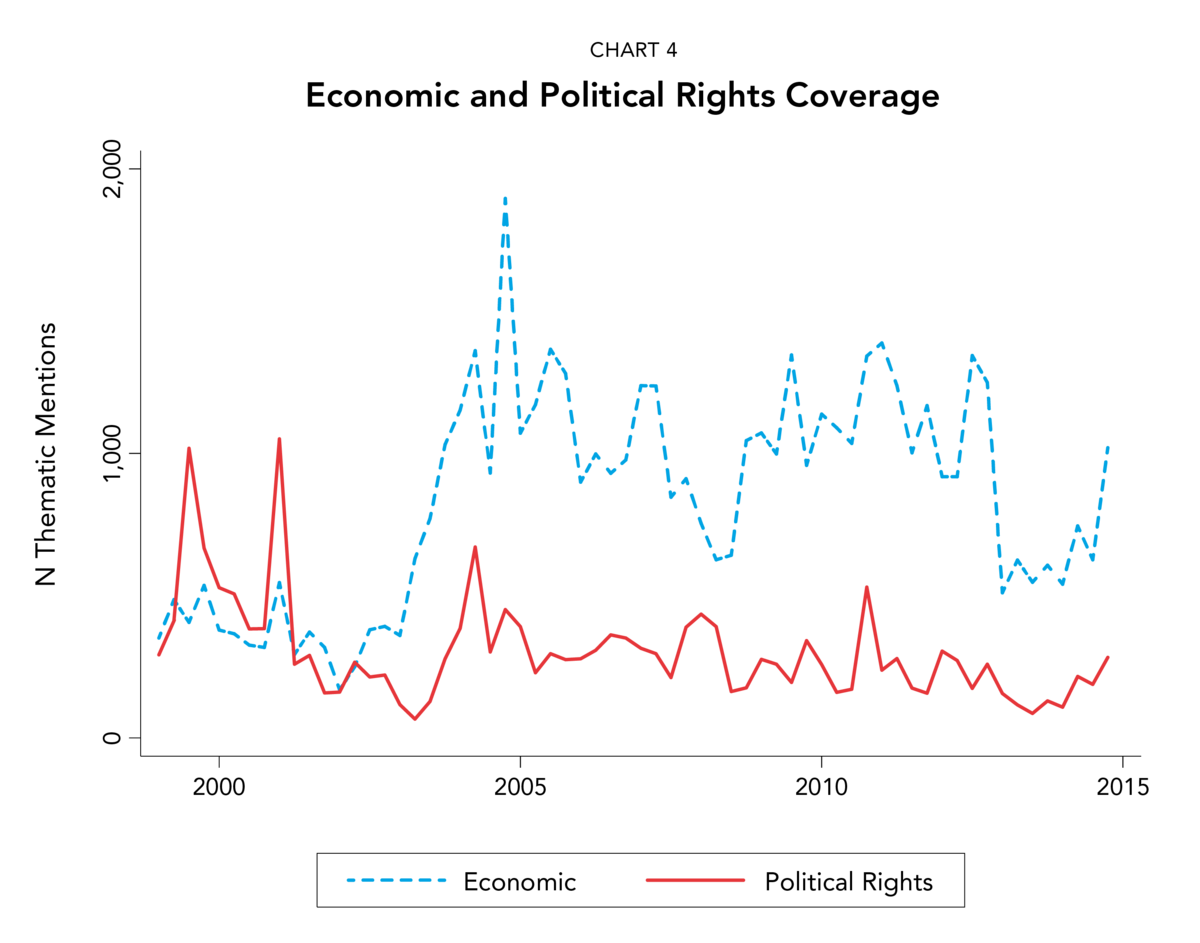 If we review the volume of coverage by theme, those most frequently covered include automotive, economic, government, market, resources, and trade (to view coverage across themes, see Annexes at the end of this article). Looking at how this changes over time, we observe a significant jump in economic and market coverage from 2003 to 2005 (note: trends in this section hold when we examine coverage proportionally in addition to looking at raw numbers). The increase in coverage took place during a period of rapid Chinese economic expansion and deepened integration into the global economy following the country’s admission into the World Trade Organization in late 2001. These economic changes had an impact in Canada, with the value of Canadian merchandise exports to China almost doubling – from C$3.6B to C$6.8B – between 2002 and 2005. Canadian news organizations took note of the shifting economic landscape.

Meanwhile, reporting on culture and history, the environment, industry, and security appears to be characterized by relatively static, low levels of coverage. The increase in, and continued domination of, economic and financial coverage reinforce claims that foreign news coverage of China is largely one-dimensional, ignoring cultural and social issues and instead focusing on fiscal matters.

This trend is not surprising given China’s increasing economic importance to Canada. Between 1999 and 2015, merchandise exports to China jumped from approximately C$2.5B to C$19.3B. Imports during this period also increased from C$9B to C$65.7B. Meanwhile, between 2000 and 2015, investment from China shot up from C$192M to C$20.6B. As goes the economy, so goes the news.

Turning to coverage of political rights, we can observe a decrease in coverage of rights-based issues in China since the early 2000s. This is correlated with the rise in economic coverage, suggesting that rights abuses have receded to the background of discussions on China in the Canadian media, allowing China’s image as a rising economic power to become the most dominant frame transmitted to Canadians.

Given the popular perceptions in public opinion data of China as authoritarian, growing, corrupt, threatening, and strong, the absence of security coverage is notable. This may be reflective of Canada’s past decisions to not commit resources to the Asia Pacific region. With few Canadian commitments in the region, it is not entirely surprising that security does not register as an area of interest in print media, particularly when compared with other areas of the world where global security is a larger issue and where Canada has a larger stake. Nonetheless, the incongruence between public perceptions of China as a threat and the lack of media coverage on security is striking.

Is the Reporting Negative?

Even though coverage of China may be economically driven, this does not mean it is negative or, in Foreign Minister Wang’s words, “full of prejudice.”

In order to answer our original question, we have to look beyond just what gets covered and turn our attention to how it gets covered. To capture how positive or negative the media are toward China, we calculated the tone of coverage within each theme. Higher values indicate a more positive tone and lower values a more negative tone. 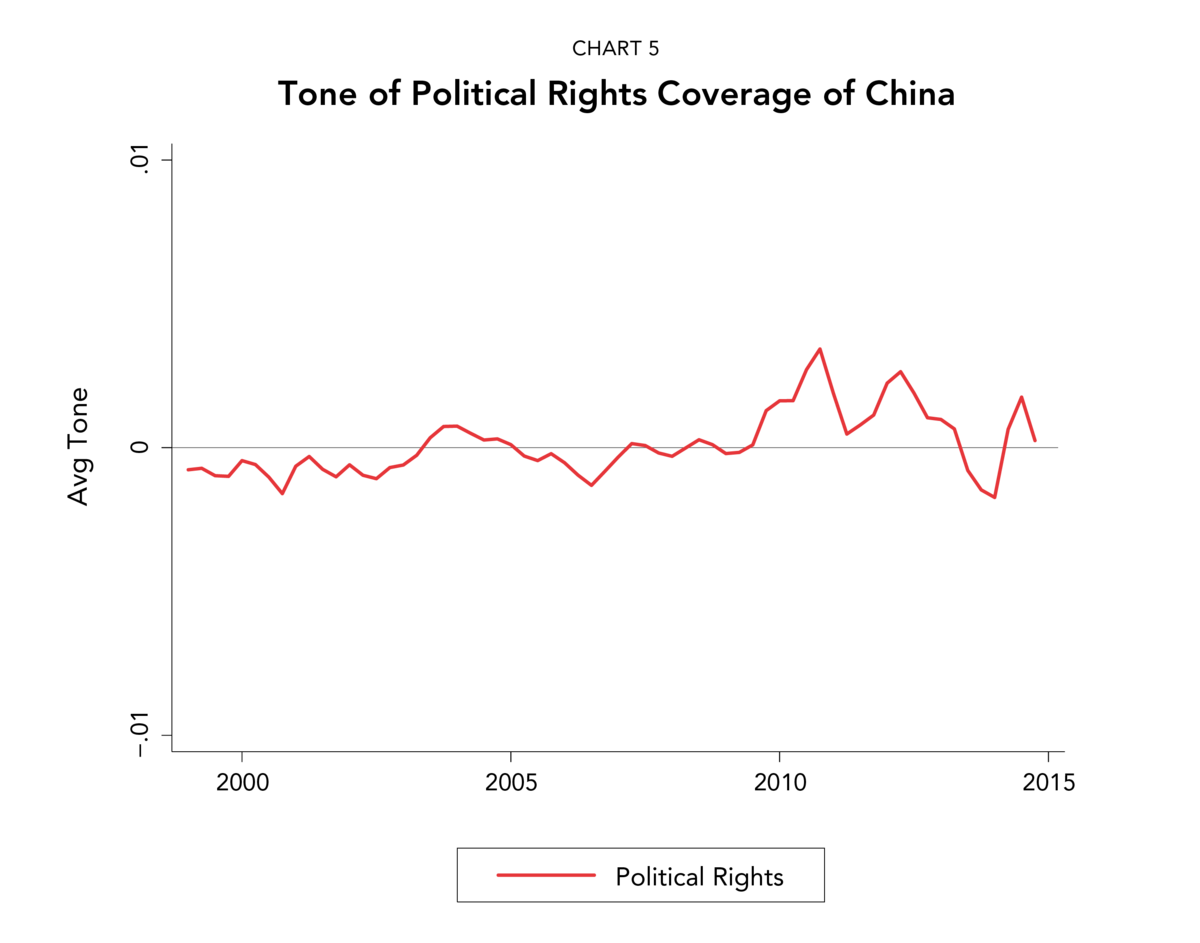 China does not receive the negative coverage that might be anticipated given the souring of public opinion (to view tone of coverage across themes, see Annexes at the end of this article). In particular, we can see this within the political rights frame, which has remained surprisingly neutral. The period from 2010 to 2012 produced a shift in the tone of Canadian print media coverage on political rights to a slightly more positive stance, with a return to negative coverage in early 2014. It is unclear whether this trend reflects changes on the ground in the status of political rights in China, general changes in the perceptions of the Canadian media toward China, or some other process altogether.

Chinese state officials and news outlets have been publicly critical of the Canadian media’s reporting on China. The frequency of incidents suggests a new assertiveness in China’s public diplomacy. Ongoing tension adds an additional layer of complexity to the job of Canadian diplomatic officials, who are increasingly called on to defend Canadian press freedom.

Returning to our question of interest: Are the Canadian media “fair” to China? On one level, the answer will depend on whom you ask. Canadian journalists and Chinese foreign affairs officials – two groups with different values and ambitions – will necessarily have very different answers.

Still, we think it is useful to inject some facts into the broader discussion. The critique of the unfairness of Canadian media coverage has largely assumed a negative trend in reporting and a Canadian public that is responsive to this negativity.

We think there are reasons to doubt this interpretation. First, Canadian print media coverage of China has increasingly been focused on economic issues. Second, coverage of political rights in China has declined as economic coverage has increased. Third, using established approaches to the study of tone of media coverage, we do not find any evidence that the Canadian media are particularly hostile to China.

The findings do not offer any easy way to interpret changes in Canadian attitudes toward China. On the contrary, it appears that media and public perceptions are largely out of sync – at least with respect to the print media. Canadian opinion soured during the same period that Canadian coverage of subjects like political rights abuses declined. We discovered no change in tone or thematic shift that could account for Canadian attitudes. Consequently, we are left with more questions than answers about the origin(s) of the negative shift in public opinion.

Canadian media reporting may irritate Chinese officials at times, but we find little evidence that Canadian media have unfairly poisoned the attitudes of Canadians toward China.