Australia and Canada have been described as “strategic cousins” – two countries with much in common in terms of their foreign policy interests. Both are federal bicameral Westminster-style parliamentary democracies, predominantly English-speaking, New World melting pots with liberal, democratic, free-trading societies. Both have also carved out constructive middle-power roles for themselves in their past international engagement.

In spite of these similarities, the two countries have been on somewhat diverging paths in the extent to which Asia is prioritized in their trade and foreign policies. In brief, Asia has been a matter of primary importance to Australia, while Canada’s attention to the region has been described as inconsistent and less than comprehensive. Evolving economic and security dynamics in the Asia Pacific region might be about to change that, particularly as Canada takes steps toward a more serious re-engagement of the region. As part of this process, makers of Canadian foreign policy should consider how partnering with Australia could bolster its effectiveness.

Organizations such as the Association for Canadian Studies in Australia and New Zealand and the Canada-Australia Public Policy Initiative epitomize the broad spectrum of similarities and shared interests between Canada and Australia. Such bodies help identify and address shared policy challenges ranging from climate change, health, and transport to regional, rural, and indigenous issues. In addition, diplomatically, Australia and Canada collaborate closely, building on the Glasgow-Burchell declaration, sharing diplomatic reporting, providing extensive mutual consular support, and co-operating with development assistance. They are both part of the Five Eyes intelligence network (along with the U.K., U.S., and New Zealand), with its intimate ties, trusted network, and shared responsibilities.

When it comes to traditional security, Australia and Canada have both looked to the United States as their principal security benefactor for more than 75 years. In Canada’s case this has been largely as a “defence against help” from its much more powerful southern neighbour. In Australia’s case, with a deep-seated sense of insecurity, it has been about keeping the Americans close. Nonetheless, while approaching the United States, arguably from opposite angles, Canada and Australia on numerous occasions have found themselves alongside each other in some remote, hostile, and needy places around the world, such as Afghanistan. Indeed, the Canada-Australia commonalities in culture, language, and security ties are particularly evident when these countries’ armed forces work together.

There is a broad consensus within Australia’s national security apparatus that the best way for Australia to influence events and avoid the prospects of escalation is to remain a trusted and close partner of the United States, able to share its views frankly and firmly. Broadly speaking, this applies to Canada as well. At the same time, Australia and Canada must work to help the United States recognize the limits to its power and influence without triggering a more isolationist impulse. In the past, Australians and Canadians have tended to pursue this approach directly with the United States, independent of each other, but in these uncertain times the imperative for cross-pollination of ideas and collaborations between these strategic cousins is greater than ever.

One such reason for working more closely in engaging the U.S. is that while the United States remains the most significant security partner for both Canada and Australia, China has emerged as the largest trading partner for Australia and the second-largest trading partner for Canada. Many in Australia worry about what to focus on to maintain this potentially precarious balance, especially as the challenge of balancing economic and security interests is becoming more complex. For Australia, it is like walking a tightrope. Maintaining a balance requires a regional focus with like-minded countries such as Canada. 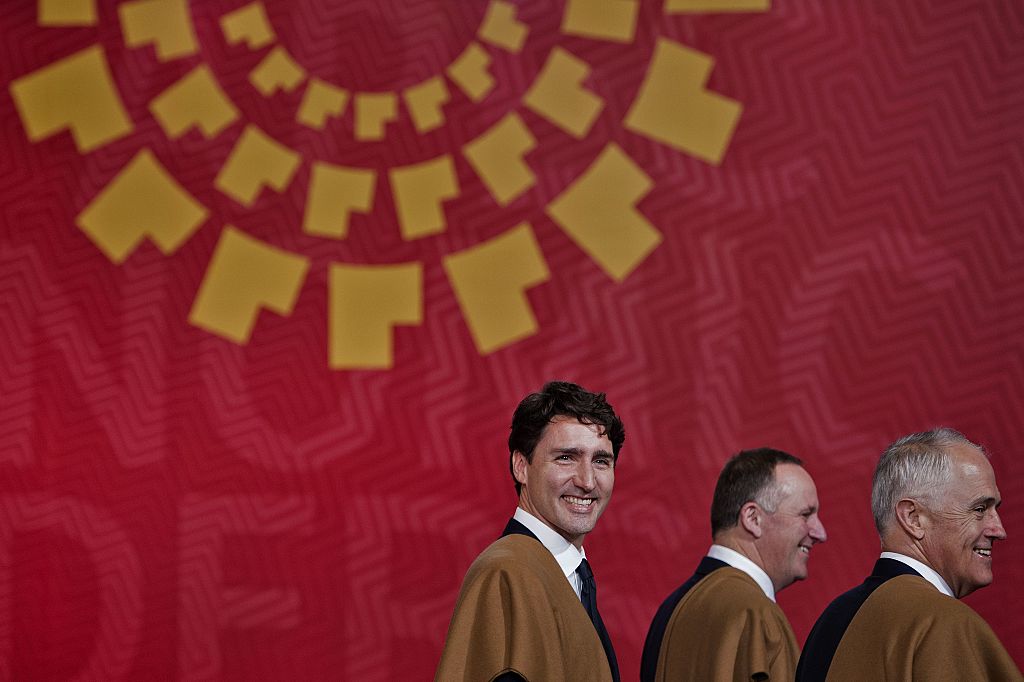 It is in this important dimension – the prioritization of the Asian region, including China – that Canada and Australia have been on somewhat divergent paths. Canada’s foreign and defence policy establishment has long been inclined to look east to Europe and the Middle East and, at times, southeast to Africa – notably in response to the calls of the Francophonie. This is particularly so for peacekeeping and humanitarian operations and the related military support. In the absence of an immediate and compelling geostrategic challenge, Canada has had the luxury of being able to choose where it deploys its resources to assist in the face of crises or disasters, as well as choosing how it does so. In the economic realm, Canada has focused southward toward the Americas and eastward toward Europe, the Middle East, and Africa for a century.

Australia, meanwhile, has elevated the Asian region as a priority in its international engagement for decades. Not surprisingly, Australia’s view of security issues in the Pacific and Southeast Asia revolves around keeping the United States engaged constructively, and also encouraging China to participate as a stakeholder in existing institutions, while searching for effective and useful bilateral and multilateral mechanisms to hedge against the heightened risks and emerging uncertainties – notably in the South China Sea.

In practical terms, most in Canada and Australia recognize that there is little prospect, short of war, of undoing China’s achievements in the South China Sea. China experienced its century of humiliation, and its rise this century points to a future that China can be immensely proud of. But its rise does not mean the South China Sea’s contiguous states and the world’s principal security guarantor need to be subjected to a commensurate humiliation either. There is a fine line to be drawn.

China’s rise and iconoclastic approach to long-recognized and UN-endorsed conventions is changing the security dynamics particularly in East and Southeast Asian waters. China’s economic investment and increase in trade has been broadly welcomed. But its assertiveness and willingness to operate outside the bounds of internationally endorsed conventions, notably in the South China Sea and East China Sea, sends an ominous signal about future security and stability. The risk of regional instability appears to be accentuated by the uncertainty over U.S. strategic engagement in Asia and increased competition over maritime boundaries.

Moreover, Australian security experts are increasingly recognizing the need to bolster ties with countries like neighbouring Indonesia and long-time Commonwealth countries like Malaysia and Singapore. Canada features in that mix as well, having a demonstrated long-term interest in Pacific security affairs dating back generations.

What Role Can Canada Play?

What should Canada be doing to bolster its contribution to regional prosperity, security, and stability? In considering a response, a quick review of Canada’s engagement in the region in the past is worth highlighting. After all, many Canadians appear to have amnesia about Canada’s ties with and investment in Asia, such as Canadian forces deploying to Asia in World War II, including to Myanmar (known then as Burma), Kiska (part of the Aleutian Islands chain that was occupied by Japan), and Hong Kong. Canada also contributed to the UN’s involvement in the Korean War. As well, Canadian monitors were sent to Vietnam at the height of the Cold War, and its peacekeepers were sent to Cambodia in 1993 and to East Timor in 1999.

Canada’s participation in the East Timor intervention was a stellar example of Canada seeing the need to remain engaged in and around Indonesia and Southeast Asia – which Indonesia’s President Joko Widodo has called the global maritime fulcrum. More recently, the Royal Canadian Navy has participated in exercises and operations in support of Australia and New Zealand, and this has been warmly welcome by Canada’s antipodean counterparts.

It is not just these past ties that are significant. Despite enduring interests and ties with Europe, Canada’s economic future is more closely linked to Asia than ever before. People in British Columbia already know this. And it seems that policy-makers in Ottawa are heeding a wake-up call about the changed economic and security dynamics at work. What will it take to make this re-engagement credible and meaningful?

To begin with, turning up routinely would be helpful. Many foreign and defence policy pundits in Southeast Asia see Canadian interest in engagement in ASEAN-related forums such as the ASEAN Regional Forum as lacking in conviction. There is a willingness in Southeast Asian forums to consider greater Canadian involvement, but also a wariness, based on recent experience, about Canadian resolve to stay the course. “Team Canada” visits to Southeast Asia in the mid to late 1990s, for instance, and contributions to international peacekeeping in East Timor in 1999, were followed by a long period of relative inattentiveness. It will require much more than occasional brief appearances to earn a seat at the table, especially in important regional forums like the East Asia Summit and the ASEAN Defence Ministers’ Meeting Plus, neither of which Canada has been asked to join.

Yet Canada can make a positive contribution, and many of Asia’s policy pundits understand that. Hence their willingness, albeit a hesitant willingness, to engage with Canada. But if Canada is serious about playing a role in the Asia Pacific commensurate with its location and economic size, then it would warrant considering more closely the approach taken by Australia.

Non-traditional security threats, including natural disasters, climate change, food security, and cyber security, point to a range of areas where the two countries can look to work together more closely.

Together they can strengthen regional security. Canada and Australia should more closely align their separate defence and security engagement activities in East Asia, share lessons learned, and look for ways to maximize their separate and collective impact in co-operating with regional friends.

Given the number and range of common interests Canada and Australia share in Asia Pacific trade and security, the two countries would be well placed to use existing frameworks to better sync their approaches and strategies. Time will tell whether Canada’s “mini pivot” to the region will include stronger Canada-Australia co-operation.