Beyond the CPTPP: Why Canada’s Relationship with Asia Needs a Long-Term Strategy

What a difference a year makes.

At last year’s meeting of the Asia Business Leaders Advisory Council (ABLAC), fears about the backlash against globalization and the election of new populist leaders with protectionist tendencies cast a pall over the discussions. Now, as ABLAC’s Asian and Canadian members prepare to meet in Toronto on March 2nd to discuss ways to strengthen economic connections, concerns remain but we have reason for new optimism. The agreement reached in January to form the Comprehensive and Progressive Trans-Pacific Partnership(usually referred to as CPTPP), which is expected to be signed later this month, marks an important milestone in boosting Canada’s trade relationship with Asia. In addition, Prime Minister Trudeau announced last summer that Canada intends to double its trade with China by 2025 and initiate talks for a free trade agreement with the country.

But the progress we have made isn’t enough. Today, Asia is the core engine of global economic growth, thanks primarily to urbanization and the expansion of its middle class. The region is home to nine of the world’s 15 fastest-growing economies. Of the 2.4 billion people around the world who will become middle class consumers by 2030, two billion will come from Asia. Deepening our relationship with Asia is critical to Canada’s future prosperity. The opportunity is vast, and the consequences of missing it are potentially dire for our economy.

2018 represents a watershed moment – an inflection point in Canada – Asia relations that can lead to much closer economic collaboration. There is a strong appetite among Canadians to continue developing our country’s ties with the region. A survey by the Asia Pacific Foundation Canada found that close to half of all Canadians believe strengthen­ing economic and political relations with Asia should be Canada’s top foreign policy priority, up from 37% in 2014. This same survey found that 46% of Canadians support a free trade agreement with China, up from 36% in 2014 – and a recent study by Paul Evans, research director of University of British Columbia’s Institute of Asian Research, puts that support even higher, at close to 70%.

Yet when it comes to trade with the region, our country has significantly underperformed our peers over the past 15 years. Canada’s exports to China lag behind other developed countries in terms of both growth and absolute value. While the CPTPP is a welcome development, we need to go beyond trade deals and develop a five-to-10-year strategy and commitment to engaging more deeply with our Asian economic partners. 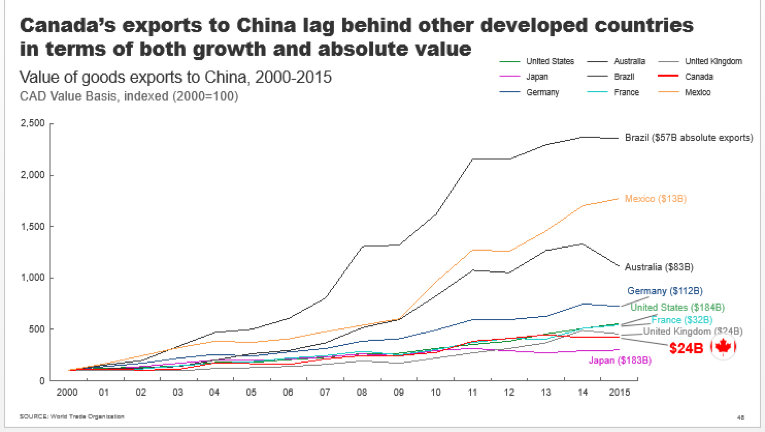 While India, Japan, Indonesia and Vietnam all represent tremendous opportunities for Canadian businesses, China is critical to Canada’s relationship with Asia. The Chinese economy is projected to overtake that of the U.S. within 15 years. Consider that by 2025, nearly one in four companies with US$1 billion or more in revenue will be headquartered in China. What’s more, the country is poised to take a stronger leadership role in trade, investment, and innovation.

To capture this opportunity, the federal government should shift resources further toward the high-growth regions in Asia. That includes establishing consulates and trade commissioner offices in more of China’s economic “hub cities,” such as Jinan and Changchun. Provincial and local governments have important roles to play as well, including building city-to-city connections, creating links between Canadian and Asian universities, fostering cultural exchanges, and encouraging more of our young people to travel to Asia.

With an enviable global brand and a strong economy, Canada is well positioned to play a larger role in shaping future relations between East and West. We largely missed the opening up of China in the 1980s. We also failed to capitalize on the next inflection point when China joined the World Trade Organization in 2001. Today however, Canadian companies are well positioned to participate in the growth in China’s private sector economy, particularly in the boom in innovation around digitization and big data. Additionally, China’s rapidly growing middle-class will drive accelerating demand for goods and services that Canadian companies, large and small, are primed to meet, notably in agriculture and food. Finally, China’s aging population will put increasing pressure to revamp its social safety net – an area where Canada is again a global leader. This is China’s third inflection point – one we cannot afford to miss.