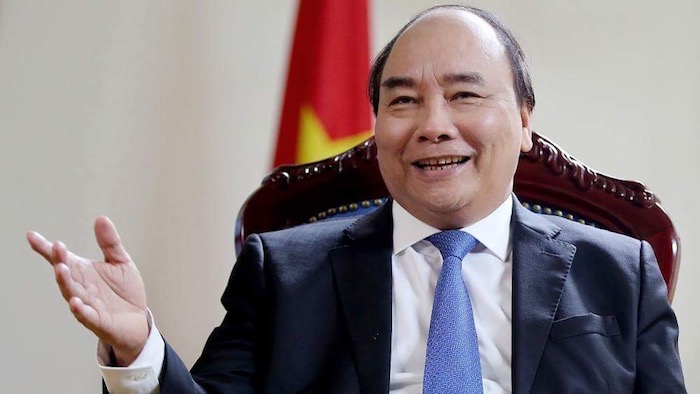 The following is an interview with Vietnam’s Prime Minister Nguyen Xuan Phuc at the conclusion of the 44th G7 summit held on June 8–9, 2018, in La Malbaie, Quebec. The interview was conducted exclusively for APF Canada by Vietnam News Agency, a governmental agency and the official state news provider of Vietnam.

Correspondent: The ocean was an agenda item for this year’s G7 Leaders’ Outreach Session. We know that Vietnam is a coastal country highly vulnerable to the impacts of climate change. Mr. Prime Minister, could you please share with us the policies that Vietnam is pursuing to develop its marine economy and protect the marine environment?

Our country has immense potential for marine economy development: a 3,260-km long coastline, or one kilometer of coastline for every 100 square kilometers of land, six times greater than the world average. Vietnam has one million square km of territorial waters, endowed with rich and lucrative resources, such as seafood (3 to 3.5 million tons), oil and gas, and other mineral resources. Vietnam has more than 2,770 islands and islets, and many beautiful bays recognized as world heritage sites, such as Ha Long Bay, and 125 beautiful scenic beaches. These make for enormous potential for the development of maritime tourism.

Vietnam is also located in a very important geo-strategic position on the international trade lane connecting the Pacific and Indian oceans. Five out of ten of the largest sea lanes in the world pass through the East Sea (a.k.a. South China Sea), accounting for more than 50 per cent of total global shipments. With more than 90 ports, including deep-water international transit ports, Vietnam boasts excellent potential in the development of sea transport, transit, and logistics.

Given such rich potential, marine economy and seaward development have been Vietnam's strategic development orientation for many years. Our vision is to build Vietnam into a marine-capable country. We have set the target that by 2020, the marine and coastal economic sectors shall account for 55 per cent of our GDP and 60 per cent of gross export.

To realize this vision and goal, Vietnam has been implementing many policies, plans, and measures to develop the marine economy and protect the marine environment.

First, we have been improving the institutions, policies, legal framework and planning for the sea and islands. The Sea Law, Marine Resources and Environment Law, and relevant regulations are being effectively implemented. Vietnam has acceded to multiple international maritime protocols and agreements in order to create the legal framework for the development of the marine economy.

Second, we are consistently implementing policies pertaining to the research and development and application of marine science and technologies. We are modernizing the marine infrastructure to support the marine economy such as coastal roads and the port network. Vietnam has established a number of competitive marine industries, such as tourism, aquaculture, fishing, and seafood processing, oil and gas exploration and production, as well as fifteen coastal economic zones. The export value of seafood in 2017 exceeded US$8.3 billion, a record year-on increase of 19 per cent. The figure for the first five months of 2018 amounted to US$3.15 billion, up 11 per cent, year-on.

Third, we consider the protection of the marine environment and ecology an extremely important, regular. and long-term mission. Developing the marine economy concurrently with the protection of the marine environment is Vietnam's consistent position in marine strategy, the principle being that “use and extraction” need to go hand-in-hand with “protection and renewal,” without trading off the environment for economic growth. All development projects must ensure full and effective observance of environment protection regulations. The Vietnamese government encourages businesses within and outside of Vietnam to invest in the sustainable development of the marine economy, such as marine ecosystem protection, sustainable aquaculture, and renewable energy development, treatment of waste discharged into the sea, and enhancing capacity for responding to climate change and rising sea levels.

Fourth, we will step up international co-operation and integration, thus making active and responsible contribution to the reinforcement of peace and stability in the seas. Vietnam supports the effort of the international community that contributes substantially to the maintenance of peace, stability, security, safety, and freedom of navigation and overflight, and to the protection of the marine environment. Vietnam’s consistent policy is to resolve differences and disputes through peaceful means in compliance with international law, in particular the 1982 United Nations Convention on the Law of the Sea; respect the diplomatic and legal processes; promote mutual trust; refrain from the use or threat of force; fully and effectively implement the Declaration of Conduct of Parties in the South China Sea (DOC); and, work towards the early conclusion of a substantive and effective Code of Conduct of Parties in the South China Sea (COC).

Vietnam stands ready to promote co-operation with all countries and partners in the development of marine economy, on the basis of equality, mutual benefit, and observance of international law towards the common goal of clean, peaceful, and stable oceans for the common prosperity.

Prime Minister Nguyen Xuan Phuc: In implementing our foreign policy of independence, self-reliance, diversification, and multi-directionalisation of our external relations, Vietnam is carrying out active and extensive international integration in a variety of areas. As a trustworthy friend and partner, Vietnam has been making active and responsible contributions to matters of common interest to the international community at many important multilateral forums, such as the United Nations, ASEAN, APEC and ASEM, to name a few. The fact that Vietnam was invited to join the recent G20 and G7 Leaders’ Outreach Summits indicates that the international community acknowledges Vietnam's active role, efforts, and contributions to the maintenance of a peaceful and stable environment for co-operation and development in the region, the promotion of the shared interests, as well as the settlement of the common challenges of the world and the region.

The agenda of this year's G7 Leaders’ Outreach Session prioritized discussion on the ocean. This is a matter of existential importance to the survival and development of coastal countries and the planet at large. At the Summit, the leaders of G7 countries and invited countries and international organizations shared their views and ideas on the promotion of international co-operation to enhance capacity in climate change and rising sea level adaptation and response, sustainable extraction of marine resources, and protection of the marine environment and ecology.

The fact that Vietnam was invited to the G7 Leaders’ Outreach Session by Canada is both another step forward in the Vietnam-Canada Comprehensive Partnership established in November 2017, and a testimony to the role, status and efforts of Vietnam in climate change response, marine economy development, and marine environment protection that are acknowledged by the international community.

At this Summit, Vietnam has provided concrete and responsible inputs to the discussions of many important agenda items, in particular the promotion of the serious implementation of the Paris Agreement on Climate Change, the protection of the marine environment and ecosystem, and the prevention of plastics pollution in the oceans where as much as eight million tonnes of plastics are being added every year. We welcome Canada and G7 countries’s initiatives to promote co-operation to prevent marine litter, advance gender equality, and facilitate women's access to basic resources and services for climate change response.

On our part, Vietnam suggested that the international community should discuss the possibility of a Global Agreement on the Prevention of Plastic Litter in the Ocean, akin to the Paris Agreement on climate change. In addition, Vietnam also calls upon the G7 countries to consider establishing an Expanded Cooperation Forum between G7 countries and coastal countries on climate change and rising sea level response and marine environment and ecosystem protection. Such initiatives stem from the urgent need of the international community for the promotion of concrete and effective co-operation in climate change response and marine environment protection, and thus were welcomed and highly regarded by many countries at the Summit.

Vietnam stands ready to promote co-operation with all countries and partners in implementing the above-mentioned initiatives through concrete and practical programs and projects, for the common sustainable development and prosperity of our planet as a whole.