Air pollution in Delhi’s National Capital Region (NCR) has once again drawn the international community’s attention, with Air Quality Index (AQI) levels dropping to “hazardous” levels and over 30 million NCR residents breathing in toxic air. In response, the government has imposed various restrictions to protect its citizens. What has also emerged is the extreme politicization of air pollution in the area, at the cost of public health and economic activities, and a visible lack of improvement in government strategies despite lofty promises.

On November 3, almost all air quality monitoring stations in the Delhi NCR indicated “severe” to “hazardous” air quality, with some readings well above 450 AQI (any AQI above 300 is considered harmful for healthy bodies). A series of reactive administrative actions followed, including school closures, a ban on construction activities, and restrictions on the movement of non-essential vehicles. Sub-regional governments in Delhi, Punjab, and Haryana politicized the issue of controlled stubble burning, one of the most visible causes of the poor air quality.

1. The toxic politics of air pollution: As shown in Figure 1, Delhi’s air quality has consistently remained “very unhealthy” (defined as fine particulate matter, or PM2.5=201-300) from October to December, but it reaches hazardous levels yearly from mid-October to mid-November. 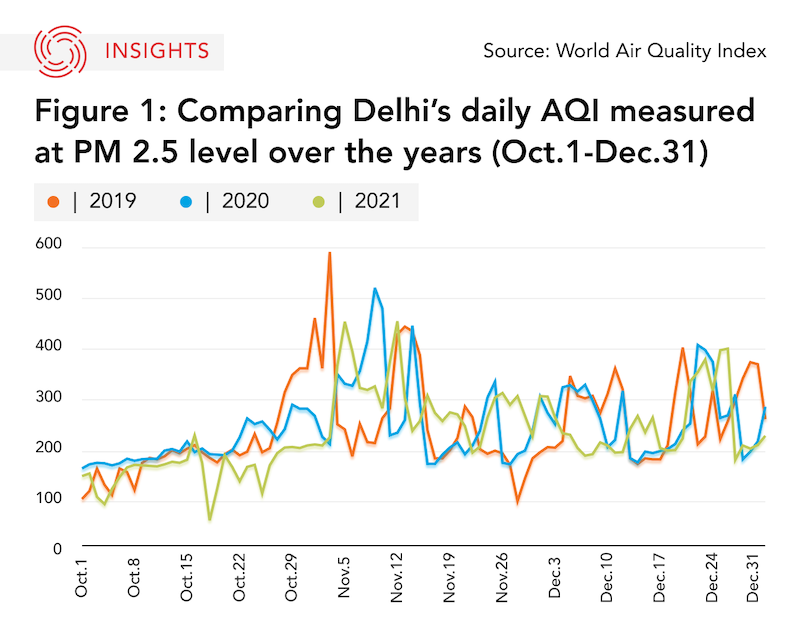 A 2021 study by a Delhi-based think tank—the Council on Energy, Environment and Water— identified both perennial and seasonal sources as the causes of this highly polluted air. Open fires, controlled stubble burning, and household heating during the winter are all seasonal sources of pollution. Factors such as transportation and industry are perennial sources. The peak stubble burning period (shown in Figure 2) in north India coincides with weather patterns such as drops in wind speed and increased festivities involving firecrackers, which compound existing pollution issues in the Delhi NCR. As a result, stubble burning has become a deeply politicized issue between regional and central governments. 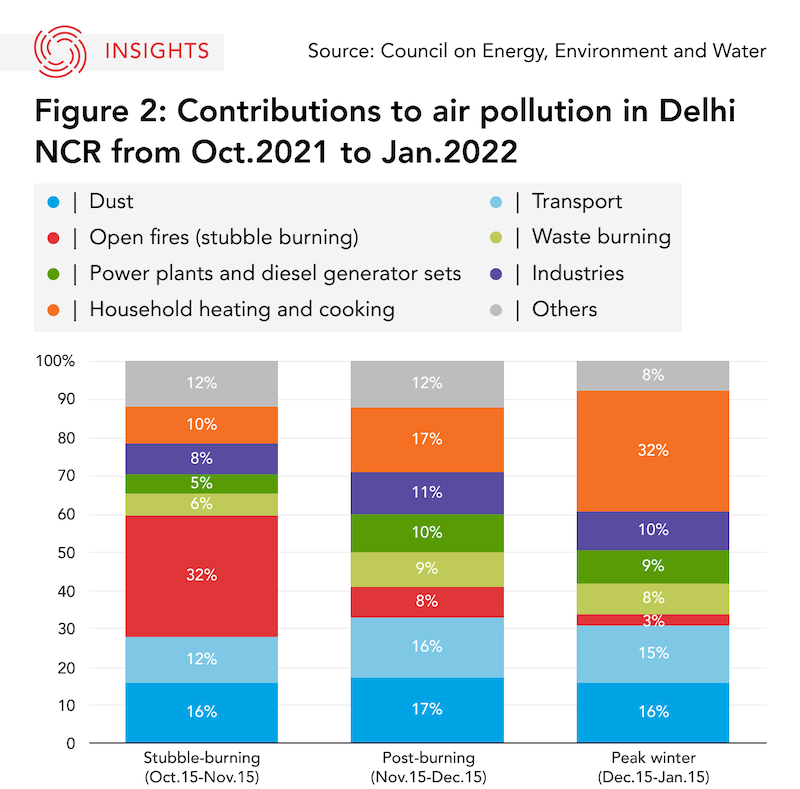 2. The state’s reactive response: In 2017, following directions from the Supreme Court of India, India’s Ministry of Environment devised a Graded Response Action Plan (GRAP), involving coordination between multiple local administrative bodies in Delhi NCR, to take graded measures based on air quality. The plan was revised in 2022 and involves monitoring air quality levels and stepping up restrictions based on the actual and projected AQI measures. Medium- and long-term measures proposed include phasing out diesel vehicles, forcing small industrial units to comply with environmental standards, and persuading farmers to use machines to get rid of stubble.

1. Despite GRAP’s more forecast-based, progressive approach to tackling Delhi’s air pollution, it remains to be seen if more proactive strategies to curb pollution in the Delhi NCR will be adopted. With a warming climate and changing weather patterns, governments must consider better airshed management, using forecast-based alert systems to help the public and administration better prepare for combatting the now perpetual issue of air pollution. Governments also need to use source-contribution modelling and forecasts to implement better pollution control mechanisms. Furthermore, governments should also provide improved machinery subsidies and alternatives to crop burning during months when weather patterns are likely to worsen.

2. Delhi’s lack of sufficient green spaces to combat the increasing pollution levels and the yearly cycle of smog that chokes the NCR has led to calls to consider moving the capital to another city in India to relieve environmental stress.

3. The Municipal Corporation of Delhi (MCD), the capital’s local administrative body that is almost as powerful as the Delhi government, will likely be reshuffled following an election on December 4. While the Aam Aadmi Party (AAP) has been in power in Delhi since 2015, it has not been able to outmanoeuvre the Bharatiya Janata Party (BJP) at the MCD polls. One of the main issues this election season is solid waste management, as 40 per cent of waste is burned due to lack of space, contributing to six to eight per cent of Delhi’s pollution.