The Hong Kong government recently approved the first batch of applications under the Land Sharing Pilot Scheme (LSPS). These long-awaited approvals came more than two years after the scheme was launched in May 2020. Despite lofty ambitions to build public housing on farmlands hoarded by property tycoons, the scheme has been marred by a lack of developer interest and transparency.

On November 3, Hong Kong’s Development Bureau (DEVB) announced that the Chief Executive-in-Council, the SAR’s organ for assisting the Chief Executive in policymaking, greenlit three applications under the LSPS. The successful applicants are the subsidiaries of two of Hong Kong’s largest property developers, Sun Hung Kai Properties and New World Development, and of leading real estate company Wheelock Properties. Together, the developers aim to build 21,600 flats, including 15,100 for public housing, on sites in Yuen Long and Tai Po districts.

The LSPS aims to harness 10 km² of private farmlands, hoarded by property developers in anticipation of land value hikes, in New Territories. Under the LSPS, the developers could apply to build flats with greater development density, on the condition that they set aside at least 70 per cent of the increased floor area for public housing or starter homes. In return, the government will streamline planning and approval processes and improve the infrastructure nearby.

The announcement marks the first batch of applications approved in principle since the scheme’s roll out in mid-2020. The LSPS received its first application in July 2021 for a total of five applications to date, indicating a failure to stimulate strong interest amid the COVID-19 pandemic-induced economic downturn. Despite pledges to cut red tape, long processing times remain a hurdle. The DEVB estimated in 2020 that construction could begin four to 6.5 years after the applications are received. Former Chief Executive Carrie Lam first proposed the LSPS in her 2018 policy address amid rising housing concerns. Despite record-low support rates, she pushed the scheme forward as the anti-extradition protests grew unruly in late 2019, and blamed housing woes for fuelling the social unrest. Since then, state mouthpieces and pro-establishment lawmakers have been criticizing Hong Kong’s property developers for hoarding land. News broke in September 2021 that Beijing reportedly lost its patience with the property tycoons and pressured them to release land during a closed-door meeting.

The LSPS has been marred by accusations of collusion and a lack of transparency since its inception. Civil society group Liber Research Community criticized the scheme as a “pay-to-play” game. The group points out that the scheme’s advisory committee includes non-officials with deep ties to property tycoons. For instance, Wheelock Properties Chairman Douglas Woo Chun-kuen currently sits on the advisory committee tasked with vetting applications. The group believes that to effectively alleviate the city’s housing crunch, the government must crack down on skyrocketing prices, and employ the Lands Resumption Ordinance, a law from the British colonial era that allows the government to acquire private lands for public interests—or in this case, for housing development. 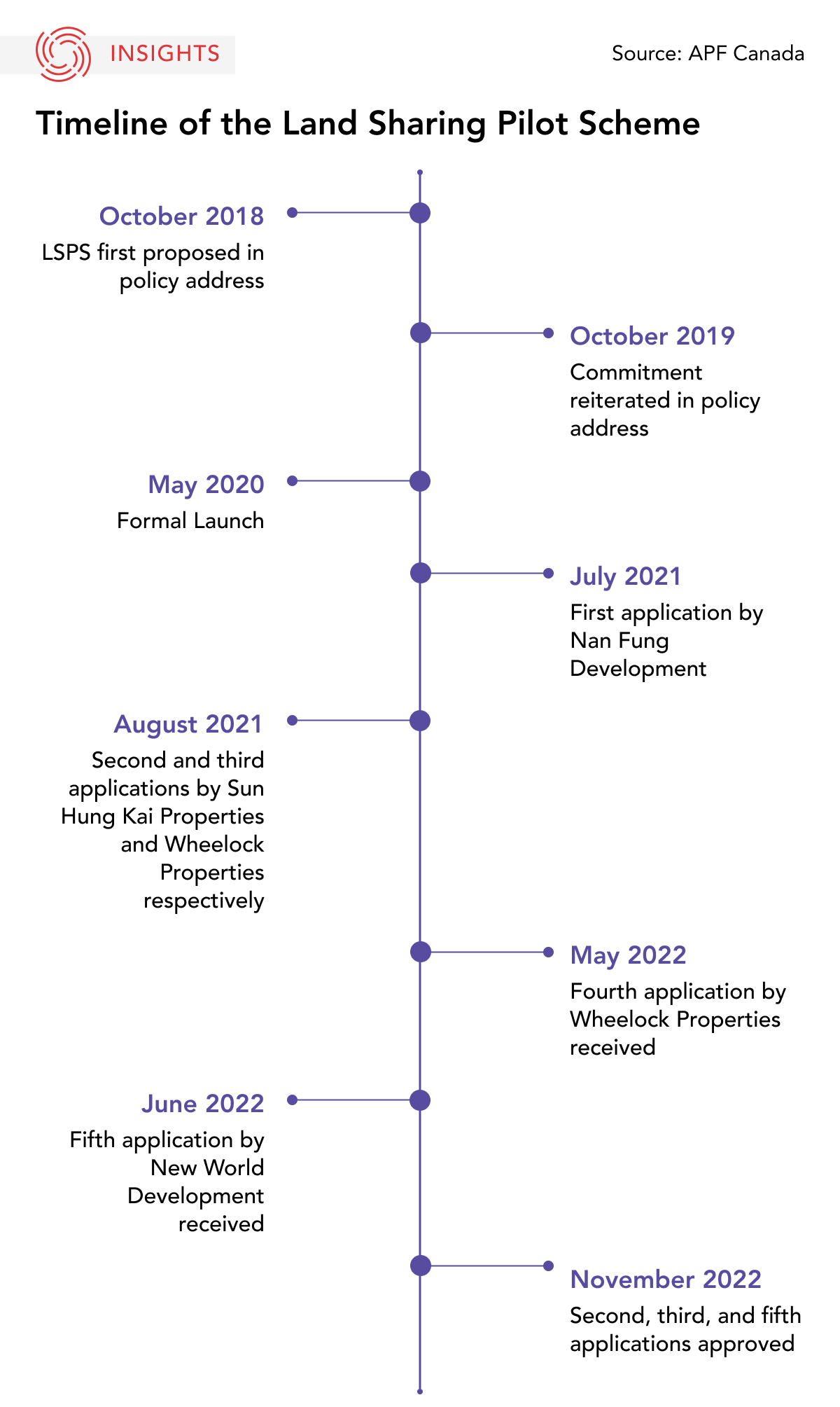 When current Chief Executive John Lee was sworn in on July 1, Chinese President Xi Jinping urged Lee’s administration to tackle Hong Kong’s housing problems head-on. Under rising political pressure, two property developers filed applications under the LSPS in 2022, and one of the two has already received approval. This may indicate an acceleration of the vetting process.

2. Projects in pipeline may be bellwether of what’s to come

Industry watchers believe more applications could come if the approved projects turn out to be feasible and profitable. The DEVB estimates that construction may begin as early as 2025, once statutory and administrative procedures are completed.