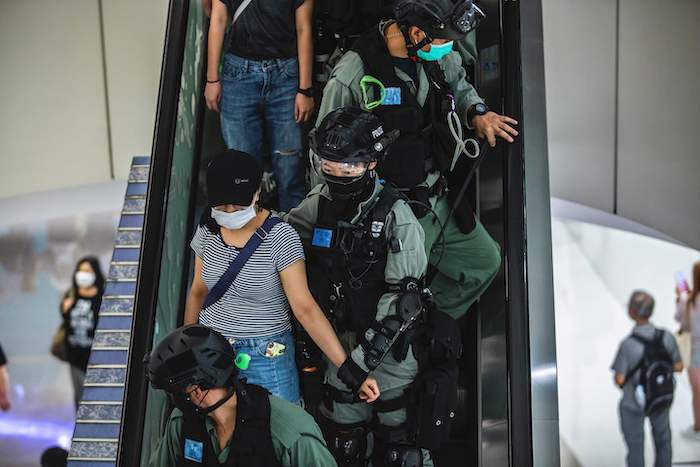 Police take away a woman during a demonstration in a mall in Hong Kong on July 6, 2020, in response to the new National Security Law that has empowered police to make arrests for people displaying now-forbidden political slogans, among other provisions. | Photo Isaac Lawrence/AFP Getty Images

This principle, which China had agreed to preserve until at least 2047, was meant to allow Hong Kong to keep a high degree of autonomy to preserve its own political and economic system, despite its retrocession to China in 1997. This move has significant ramifications for the city's autonomy, democracy, and identity and potentially for the future of other matters such as Taiwan.

This Special Edition of Asia Watch takes a deeper look into the Law itself by examining the new powers it gives Beijing over Hong Kong, how the Law will be implemented, and the implications for the city's residents. We also consider the international responses so far, what the Law means for the city going forward, and how this will affect Canada.

What’s in the Law?

Hong Kong’s National Security Law defines four types of offences: secession or undermining national unification, subversion of state power, terrorist activities, and collusion with foreign countries or entities to undermine national security. The language used to define the offences is nebulous, and Article 47 of the Law gives Hong Kong’s Chief Executive – not the courts – binding power to certify whether an act involves national security or state secrets. Article 65 states that the power to interpret the Law is vested in the Standing Committee of the National People's Congress in Beijing. The combined effect of vaguely stated offences and the lack of independent judicial interpretation could lead to a blanket criminalization of dissent. The popular slogan ‘liberate Hong Kong, revolution of our times’ has already been outlawed on national security grounds, and other protest symbols and tactics could be next.

In addition to the four offences, the National Security Law creates new institutions with sweeping powers to carry out related mandates. Particularly noteworthy is the Office for Safeguarding National Security, which is staffed and controlled by Beijing and operates outside Hong Kong’s jurisdiction. The office exercises direct control in cases that it deems complex, serious, or imminent. Such cases would be prosecuted and adjudicated in a mainland Chinese court, effectively opening the floodgates for those charged under the Law to be tried in the Chinese legal system. For cases tried in Hong Kong, the trial judges are appointed by the Beijing-friendly Chief Executive to one-year terms, directly contravening the convention of having judges selected by the judiciary. A former chief justice has called the provision “detrimental to the independence of the judiciary.”

The National Security Law’s unfettered power and harsh penalties (up to life in prison) concern not only Hong Kong residents. Articles 36 to 38 state that the Law applies to people, organizations and companies set up in Hong Kong, regardless of residence, nationality, or whether an offence was committed in Hong Kong. Anyone who has done anything that the authorities deem critical of the governments in Hong Kong and Beijing could potentially be investigated, detained, and indicted under the Law while staying in or passing through Hong Kong or other parts of China. For Canadians who are currently in Hong Kong or plan to visit in the future, this is particularly worrisome and could have a chilling effect on what they do or say.

The Hong Kong police forces were quick to exercise the Law. On July 1, within 15 hours of the Law taking effect, the police arrested a protester who allegedly publicly carried the Hong Kong independence flag. During the July 1 protests, which mark the 23rd anniversary of Hong Kong’s handover to the People’s Republic of China, the police arrested an additional nine protesters for carrying banners favouring Hong Kong’s independence ¬– an activity that the Hong Kong police defined as secessionist under the new Law.

Cautious and strategic application of the Law?

Applying a controversial law in a volatile and polarized environment is challenging. Pro-democracy protests have been going on for more than a year, and public trust in the government is low. A comprehensive implementation of the Law leading to mass arrests would likely backfire, further escalating tensions and complicating the government’s ability to govern. Recently, the Hong Kong police declared they would apply the Law to only a small number of people. The police forces are likely to follow this course of action to target a small number of vocal activists, rather than massive arrests, to achieve deterrence while mitigating the degree of public resentment.

As the Hong Kong National Security Law moved towards the implementation phase, some countries took up sanctions against China. Since June, the U.S. has begun to eliminate Hong Kong’s special status by halting defence exports, restricting access to technology products, and imposing visa restrictions against Chinese officials responsible for undermining Hong Kong’s autonomy. It is moving to penalize financial institutions that do business with said officials. Hong Kong could lose its special trade status within the World Trade Organization, effectively making Hong Kong like other mainland Chinese cities. Last week, Canada joined the U.S. in sanctioning China by banning sensitive military items and halting extradition to Hong Kong. On June 30, Global Affairs Canada cautioned Canadians travelling to the city of the “increased risk of arbitrary detention on national security grounds” and possible extradition to mainland China. In the private sector, software companies such as Microsoft, Zoom, and Facebook stopped processing data for the Hong Kong government.

As many fear that freedom is eroding in Hong Kong, some countries have started paving the way for people who choose to move aboard. In June, the U.K. announced that it would offer the ‘right to remain’ for nearly three million Hong Kong citizens, including 350,000 British National Overseas passport holders and 2.5 million people eligible for the passport. Under the plan, migrants will be allowed to live and work in the U.K. for five years. At the five-year mark, they can apply for settled status and apply for citizenship after one more year. The U.S., Australia, and Canada are also reportedly considering to provide refuge to fleeing Hong Kongers.

From the beginning, Taiwan has been no bystander to the Law, as its very existence as a self-ruled island is a direct contravention to Beijing’s definition of national unification. Shortly after China announced its intention to introduce a national security law in Hong Kong, Taiwan signalled that it would provide humanitarian aid to politically persecuted Hong Kong residents. On July 1, one day after Beijing passed Hong Kong’s National Security Law, Taipei unveiled the new Taiwan-Hong Kong Services and Exchanges Office. This government office will be helping migrants from Hong Kong apply and resettle in Taiwan if they enter legally. For its part, Beijing offered the usual rebuttal, accusing Taiwan of harbouring “rioters” and nurturing a “separatist plot.”

Hanging in the Balance: The Future of Hong Kong

In the immediate aftermath of the National Security Law, some Hong Kong youth-based pro-democracy parties have disbanded for fear of being targets of the new law. One of the most notable examples is the dissolving of the youth group Demosisto, which also saw one of its protest leaders, Nathan Law, flee Hong Kong. With pro-democracy activism in Hong Kong under the scrutiny of the National Security Law, digital activism from Hong Kong activists abroad may become a new norm. In a video statement to a U.S. Congressional committee, Nathan Law uttered the now illegal phrase “liberate Hong Kong, revolution of our times.” Law has not yet been charged for making the statement. Still, observers will be watching how the authorities interpret the borderless reach of Article 38, and how Hong Kong protest culture may try to find new ways to take their battle for democracy outside the city.

As tensions in Hong Kong continue to escalate, many Hong Kongers will be in a full electoral fighting mode as the 2020 Legislative Council elections are set for this September. The election for 70 seats in Hong Kong’s legislature will likely become a political litmus test to evaluate the government’s performance over COVID-19 and the issue of democratic reform. Last year, as the Anti-Extradition Bill protests caught the world’s attention, pro-democracy candidates used the momentum of the movement to win a landslide number of seats in the November 2019 District Council elections. However, with the new National Security Law in place and increasing fears over limited freedom of speech, we may see more pro-democracy candidates disqualified and a further weakening of their election campaigns.

The reverberating effects of international responses could cause investors to lose confidence in Hong Kong, triggering an exodus of emigration from the city, similar to the mass migration before the 1997 handover of Hong Kong. Despite the ‘One Country, Two Systems’ model and the Basic Law guaranteeing Hong Kong a high degree of autonomy and its “way of life shall remain unchanged for 50 years,” the rapid changes to Hong Kong over the past decade have begun to erode Hong Kong’s distinctive identity and place as an interlocutor between China and the world. As China celebrated the 23rd anniversary of the Hong Kong handover this past July 1, the world continues to observe how rapidly Hong Kong society may change.