The Impact of COVID-19 on Remittance-Dependent Economies

What impact on remittances?

The current halt in remittance flows has two main consequences. First, a disruption of remittances means lower income for recipient households. Remittances are a result of labour migration where households invest in having a family member work abroad with the goal of sending much-needed money home. It represents an implicit contractual arrangement between a migrant and his/her family, and is often seen as a familial obligation. Remittances have also become a key component of local and national development in many developing economies. Remittance flows now exceed the volume of official developmental assistance, and are also expected to soon surpass foreign direct investment flows in many economies. 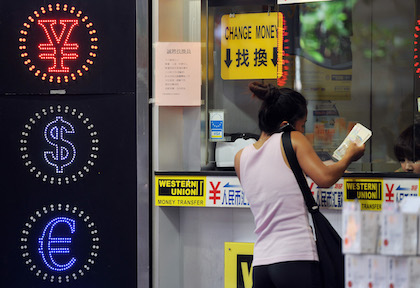 Second, countries that are economically dependent on remittance inflows will be more likely to suffer sharper economic downturns in the context of COVID-19. Indeed, for many dependent economies, remittances make up a sizeable portion of their national gross domestic product (GDP) and are a large contributor to the foreign reserves needed to finance imports of goods and services.

Lower flows not only negatively impact government budgets, but as overseas workers return home, their numbers compound unemployment rates in their home economies. And with measures now being taken in developed economies to favour domestic production and employment, the recent drop in remittance flows may extend well beyond the current crisis.

Remittance dependence in the Pacific Islands

According to the World Bank, 41 per cent of all remittances sent in 2019 went to economies in the Asia Pacific. The top three recipient economies were also all in the region: China, India, and the Philippines. In terms of remittance dependence, half of the 10 most dependent economies are Pacific Island countries. Among them, and as the graph below shows, Tonga is the most dependent, with over one-third of its GDP contingent on remittance inflows. 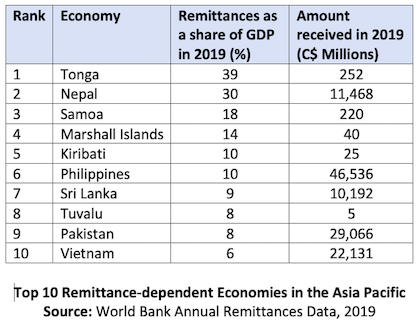 Similar to other remittance-dependent economies like the Philippines, Pacific Island migrants typically move abroad to work in service-related jobs. Women often find employment as domestic workers and caregivers, while men take up seasonal agricultural work. There are specific labour migration trends for each Pacific Island economy, which were documented in a 2007 report by the International Monetary Fund. For example, many Fijians have moved to Australia, Canada, and New Zealand to work as health-care professionals and computer specialists. In Kiribati, the majority of migrants are seafarers. Samoan and Tongan migrants typically work in construction and agriculture, particularly in Australia and the United States.

As one of the world’s major migration hubs, Canada plays an important role in the global exchange of remittances. In 2017, the World Bank estimated that Canadian residents sent C$32B in remittances abroad, making Canada the sixth largest source of remittances. The top recipients of Canada’s remittances are in the Asia Pacific, particularly China, India, and the Philippines. 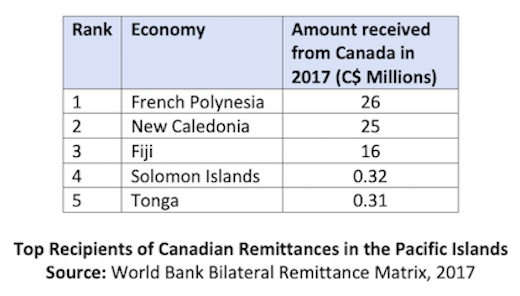 There have yet to be any significant disruptions reported in Canada’s remittances since the start of the COVID-19 pandemic. This is likely due to the fact that many migrants living in Canada work in essential services like agriculture and health care. Indeed, many of Canada’s frontline and essential workers are temporary foreign workers – including clerks, nurses, and caregivers – who continue to work despite difficult conditions, not only through a sense of civic duty, but also in order to keep sending money home.

This may change, however, depending on how severely businesses and the economy will be impacted by the pandemic in the months ahead. Anticipating these disruptions, there are two important steps that Canada can take to support migrant workers and their families. First, the Canadian government can help lower the cost of sending remittances. Secondly, Canada can pursue targeted tax incentives for diaspora communities in order to encourage contributions to beneficial initiatives and programs in their home countries. 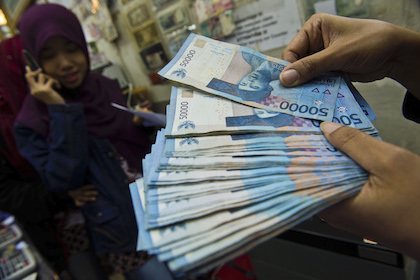 The issue of expensive money transfer fees has been highlighted before, for example through Canada’s involvement at the G20. Reducing money transfer costs can have two important benefits for remittance-dependent economies. First, a larger portion of money sent abroad would go directly to households, rather than being lost through transaction fees. Second, in lowering these fees, Canada can show its support for Pacific Island countries like Fiji that are dependent on Canadian remittances, as well as for other important remittance-dependent partners in the Asia Pacific like the Philippines. Reducing these fees also supports international efforts such as the G20’s recent decision to suspend debt payments for economies in the International Development Association, which includes Pacific Island countries like Tonga, Samoa, and Fiji.

Some avenues of remittance reforms currently being explored by New Zealand and Australia include linking the region’s payments systems and improving compliance with national anti-money laundering laws. The Canadian government has also identified expensive money transfer fees as an issue to tackle. In 2015, together with the G20, Canada announced a series of provisions to reduce transaction costs, such as increasing remittance market competitiveness and improving transparency and consumer protection in money transfers. These measures have led to a decrease in the cost of remittances. On average, Canadian residents pay a six per cent fee, with more expensive fees for lower amounts sent. For example, a transaction up to C$999 would incur an average fee of 11 per cent. However, as set in the 10th United Nations Sustainable Development Goal, fees should be three per cent or lower in order to reduce inequality within and among countries.

As a migrant host country, another potential avenue for Canada to explore is capitalizing on migrants’ ties with their home countries and encouraging voluntary contributions alongside their remittances. These donations can be sent directly to migrants’ home governments, or to designated charities or funds, depending on what is deemed most appropriate. To encourage donations, these can be paired with tax incentives targeted toward migrant workers and others who choose to donate. The Canadian government can help ensure that a higher proportion of money earned by migrant workers actually goes to households dependent on it.These tax incentives could be similar to those provided for newcomer immigrants, like the GST/HST credit. Overall, this measure can be easily implemented by adding a choice for donations when sending remittances. These could then be matched by the Canadian government to further show its support of migrants and their home countries. A similar donation-matching initiative was enabled for the Philippines when Typhoon Haiyan hit the country in 2013.

The COVID-19 crisis will have significant repercussions throughout the world, particularly for remittance-dependent countries. By lowering remittance fees through collaboration with banks and money transfer service companies, the Canadian government can help ensure that a higher proportion of money earned by migrant workers actually goes to households dependent on it. In addition to lowering remittance costs, Canada can also encourage its resident diaspora communities to contribute to their home countries’ development efforts with targeted tax incentives and optional donation initiatives. 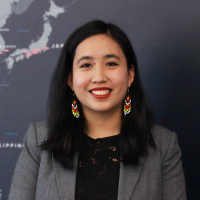 Phebe M. Ferrer is the Project Specialist for the APEC-Canada Growing Business Partnership. She was a former MSME Research Assistant and a Junior Research Scholar. She is an MA graduate from the University of British Columbia's Department of Political Science.

Lessons in Survival and Success from Peru’s Entrepreneurial Landscape