Impacts of the US-China Trade War

What started as a taunting strategy by US President Donald Trump to please his political base is now a full-blown trade war between the U.S. and China. September marks the 18th month of a power-play competition that has the potential of dragging the world into an economic slowdown.

While some countries in the Asia Pacific are benefiting from trade and in-bound investment, others may suffer a recession if the trade war continues into the upcoming year. In today’s Special Edition of Asia Watch we take a look at the state of the trade war and the consequences for Canada and its partners in the Pacific.

The Trump administration released an official report in March 2018 framing its issues with China: a ballooning trade deficit of US$425B, unfair trade practices, intellectual property theft, and forced technology transfer. These claims were earlier aired by Trump on the campaign trail and over Twitter, but they are also part of a longstanding and concerted effort from the nationalist side of the Republican Party to reverse what they see as extreme globalist policies by previous administrations. 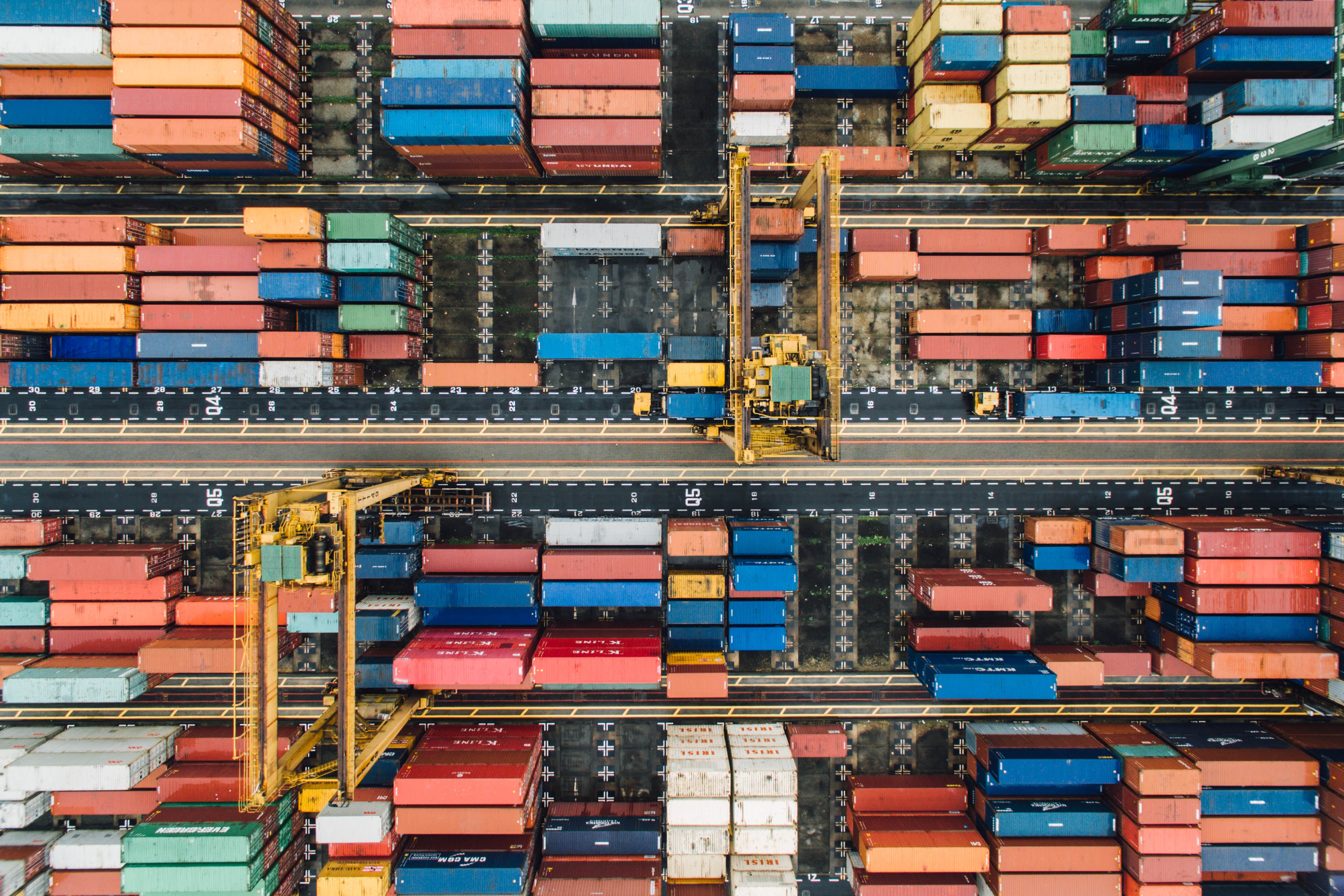 Aerial photo of area filled with intermodal containers. | Photo by chuttersnap via Unsplash.

The U.S. imposed the first round of tariffs, penalizing US$34B worth of Chinese imports into the U.S. in July 2018. The rates ranged from an additional 10 to 25 per cent, and specifically targeted sophisticated manufacturing products in the telecommunications sector, along with computer circuit boards and processing units. Since then, the U.S. has imposed four more rounds of tariffs against Chinese products, reaching a whopping US$450B. The U.S. has promised even more in the coming months, with a significant hike to 30 per cent tariffs on specific Chinese products.

China did not blink. It responded immediately with tariff retaliations of exactly the same amount during the first two rounds. The target was agricultural products originating from counties where Trump got the most support during the 2016 presidential election. Chinese President Xi Jinping, however, decided to be the adult in the room, slowing down the pace of his retaliatory measures by September 2018. The move was part of a strategy to keep trade deal negotiations on track, but was overshadowed by an escalation in tariffs and mutual mistrust. The G7 last week confirmed that perception, since Trump announced a Chinese rapprochement that never actually happened. China now has decided to play the long game and to stop trying to negotiate until after next year’s U.S. presidential election.

As the U.S.-China trade war continues to escalate, the pace of global economic growth is slowing. In June, the World Bank Group forecast global economic growth to be 2.6 per cent in 2019 and 2.7 per cent in 2020, a 0.4 per cent drop from the 3 per cent growth in 2018. While the projected slowdown cannot be attributed solely to the trade war, the report points to the growing risk of rising trade barriers as a contributory factor, while global trade growth has reached the lowest level since the 2009 financial crisis. In May, the International Monetary Fund estimated that the trade war could cut 0.3 per cent off of the global GDP in the short term.

Earlier today, the Bank of Canada announced that it will hold its interest rates steady at 1.75 per cent, while anticipating an economic slowdown in the second half of the year. In its press release, the bank said that because the negative effects of the trade war between the U.S. and China were more significant than the bank’s previous projection, the current rate of stimulus remains appropriate. A research note published by the Bank of Canada earlier this year also warned that a modest escalation of trade tensions could lead to rising prices and falling real GDP in Canada.

Most Southeast Asian stock markets closed lower this week due to the demoralizing effects of the trade war. This is yet another indication of how the battle is roiling regional economies that have broadly benefited from the accelerating shift of not just lower-level manufacturing, but also tech and consumer goods companies, from China to lower-cost manufacturing economies such as Thailand and Malaysia. But in advanced manufacturing economies such as Singapore, companies have been hurt by the ongoing trade war due to its impact on materials they purchase from U.S. suppliers.

Google’s recent announcement that it would push to develop a Vietnamese production base is just one example of the trade war’s effects on international corporations, as the twin pressures of higher Chinese labour costs and spiralling tariffs drive firms to seek alternate production lines in order to drive their economically sustainable growth across markets. Historical reluctance to liberalize its trade has kept India largely locked out, further augmenting Southeast Asia’s attractiveness. Meanwhile, Japan and South Korea have started to realign their own value chains. Korean Air Cargo, for example, has followed companies’ shifting production bases to Southeast Asia. The launch of its freighter route between South Korea and Vietnam via China is an indicator of how Southeast Asian economies have siphoned off parts of the value chain from China.

Some of these shifts are not an entirely new phenomenon: companies’ relocation in recent years due to higher costs in China have been accelerating, though many struggle to know where they should relocate. Trade patterns are shifting and companies are looking to work with Southeast Asian nations like Vietnam and the Philippines, where much of the growth now lies, in no small part due to increased/improved trade architecture. The CPTPP and ASEAN Free Trade Area remain strong pillars for Southeast Asian economies to economically engage, while the region’s economies have also begun looking north to the Eurasian Economic Union and east to the Pacific Alliance, potentially restructuring global trade long past the current trade war’s resolution.

Both the U.S.-China trade war and the December 2018 arrest of Huawei CFO Meng Wanzhou have had serious repercussions for some Canadian sectors. In 2018, China imported 40 per cent of Canadian canola, with Canadian canola seed exports to China valued at around C$2.17B. But in 2019, China blocked imports of Canadian canola. Then, in late June, China also blocked imports of Canadian pork – a big blow to Canada as China was Canada’s biggest pork market. Meanwhile, other Canadian sectors, such as wheat and lobsters, have benefited from the trade war. According to the US Department of Agriculture, Canada’s share of Chinese wheat imports rose from 32 per cent in 2017-2018 to more than 60 per cent in 2018-2019, a gain that has come at the expense of American and Australian wheat farmers. The value of Canadian lobster exports to China from January to June 2019 was nearing US$200M – a sharp rise from 2018 when lobster exports to China amounted to US$223M for the entire year. This spike is a direct result of plunging U.S. lobster exports to China following China’s newly imposed tariffs on the flavourful crustaceans.

With the Trump administration treating China as both an economic and strategic rival, Canada is paying the price. Article 32.10 in the USMCA, the new NAFTA, gives the U.S. a veto over Canada and Mexico’s future free trade agreements with China. In addition, Canada’s arrest of Huawei’s Meng was in response to a US request – an event that triggered Chinese retaliatory measures against Canadian canola and pork imports to China.

Canadian farmers are facing uncertainty, not sure whether to grow more wheat or canola for next year, and they also need to think seriously about other export markets as alternatives to China. Meanwhile, the federal government does not have a clear strategy to resolve the conflict. However, the appointment today of Canada’s new ambassador to China, Dominic Barton, former Senior Partner with McKinsey & Company and its Asia Chair from 2004 to 2009, ends a months-long gap without a top Canadian diplomat in China. Barton is well-connected in China and might be in a position to put Canada-China relations back on track.