The recently opened Legoland theme park in Chuncheon, South Korea, became the epicentre of an ongoing financial crisis in South Korea when one of the project’s developers defaulted on October 5, 2022. Since then, the South Korean financial market has been in dire straits, battling mounting economic uncertainty and issues with liquidity. 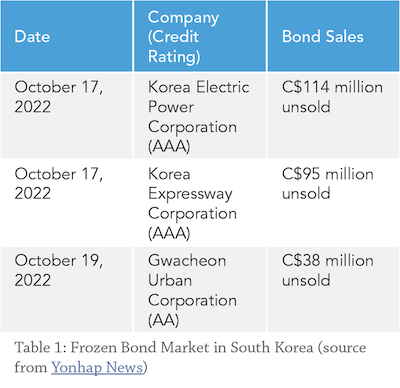 Private and public companies also raise funds by selling corporate bonds. However, as fewer people have purchased gilts since late September, several companies may not be able to repay bonds on time, stalling their development projects. Smaller companies especially have been facing greater difficulties securing funds from the financial market.

Factoring in the rise in the benchmark interest rate and the Russia-Ukraine war, the balance of real estate project financing (PF) loans, estimated at C$107 billion (112 trillion won) as of June, will likely cause a series of liquidity or bankruptcy crises in 2023. The Bank of Korea (BOK) lowered South Korea’s growth projection for next year from 2.4 per cent to 2.1 per cent this August and will announce a further downward revision in November. Accordingly, local governments and various financial institutions are reviewing their PF plans and preparing reserve funds in case of default.

Analysts point out that the national government’s intervention undermines financial market autonomy. For example, the financial authorities ordered large securities firms to save C$952 million (1 trillion won) to buy corporate bonds. The financial sector complains that taking on the risk of insolvency may be a breach of trust to their shareholders.

3. Winds of gloom and doom at a crossroads

The BOK has a dilemma on its hands. Following in the U.S. Federal Reserve’s footsteps, it has retrieved money from the financial market through its tight financing policy to counteract inflation. However, the BOK is facing a situation where they have to release more and more money again. The BOK has been indirectly purchasing bad loans to provide liquidity to the financial market, which is not in line with its current monetary policy.