As three northeast Indian states head towards legislative assembly elections this spring, critical issues around identity politics, tribal issues, and shifting party alliances come into play in Meghalaya. Considering a history of pre-election violence in the state of 3.3 million — and the prospect of even more protests against the government over its inaction on border disputes — the number of police in the state has increased. Meanwhile, Meghalaya’s ruling National People’s Party (NPP) has parted ways with the Bharatiya Janata Party (BJP) following significant disagreements. Tribal issues remain at the forefront for both parties in the tribal-dominated Meghalaya.

Meghalaya’s upcoming legislative assembly elections in March 2023 have prompted a shift in the state police’s administrative structure, along with increased security efforts. Following a security assessment, Meghalaya’s chief electoral officer reported that out of 3,482 polling stations, 782 are vulnerable to security issues, while 402 are in a “critical state.” In response to the assessment, the state government transferred 10 Indian and Meghalaya police services officers to East Khasi Hills and West Khasi Hills and also requested 119 companies of Central Armed Police Forces, of which 30 have already arrived. With a sizable tribal (Indigenous) population (86%), Meghalaya often witnesses pre-election violence rooted in identity and political issues, including threats by separatist groups.

The previous assembly elections in Meghalaya in 2018 saw a rise in politically-motivated violence, with one election candidate and three bystanders killed in a targeted bomb attack. Additionally, the Meghalaya state government’s alleged inaction against the protesting tribal population following the November 22, 2022, police firing incident along the disputed Assam-Meghalaya border region has also raised questions about the state’s prioritization of political motives over public safety.

Meghalaya, especially the capital Shillong, often witnesses nativist violence, and non-tribal residents — such as Bengalis, Nepalis, and Punjabis — have frequently been targeted. This was evidenced in the aftermath of the BJP-led passage of the 2019 Citizenship Amendment Act, as locals feared that Bangladeshi Hindus could be incentivized to move to Shillong if offered citizenship. Over the years, multiple incidents have demonstrated the increasing intolerance towards non-tribal communities. Apart from ethnicity, religion acts as another fault line. Meghalaya is a Christian-majority state (Table 1), and anti-conversion drives by the BJP’s Hindu nationalist parent body, the Rashtriya Swayamsevak Sangh, have caused unease among the NPP cadre. 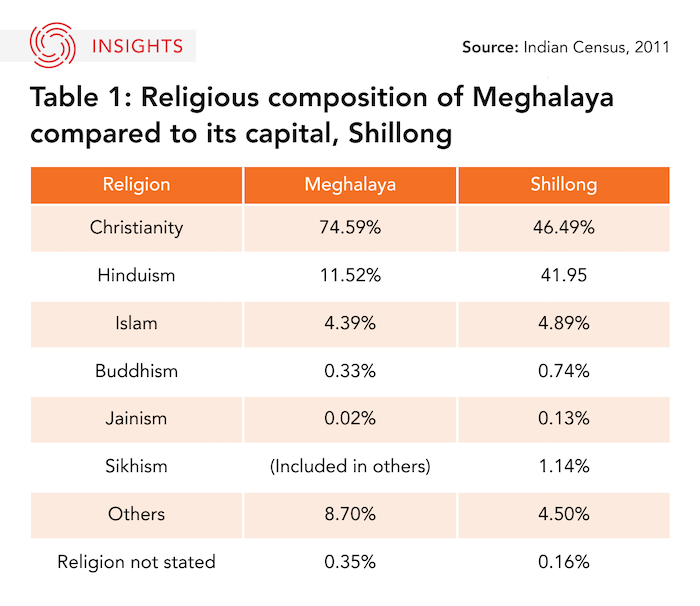 The BJP and NPP recently clashed over the impacts of India’s Uniform Civil Code on Meghalaya’s tribal culture, and there has since been a shuffling of alliances among members of the legislative assembly. With such fiery disagreements around several key issues since the 2018 legislative assembly elections, Meghalaya Chief Minister and NPP leader Conrad Sangma announced in November 2022 that his party would participate in the 2023 assembly elections without forging a pre-poll alliance with the BJP, not only in Meghalaya but also in the poll-bound states of Nagaland and Tripura.

1. Impact on 2024 general elections
Depending on which way the wind blows in 2023, the BJP, which holds 14 out of the 24 Lok Sabha seats from the northeastern states, could secure a better footing in the region ahead of the 2024 general elections. In the 2018 assembly and the 2019 general elections, voters in the three states – Meghalaya, Nagaland, and Tripura – voted along similar lines, favouring BJP and allied parties. A similar verdict can be expected in 2024, with the BJP emerging as a favourite in Tripura, an alliance partner in Nagaland, and a disrupter in Meghalaya. The Trinamool Congress, which launched its Meghalaya unit in 2021, has absorbed a majority of Congress MLA-elects from 2018, and could also be a major player in Meghalaya.

3. Future of Assam-Meghalaya border talks
Meghalaya’s five-decade-long border dispute with Assam could also impact election results, particularly after the Supreme Court of India halted the border pact signed between Meghalaya’s Sangma and (BJP-ruled) Assam Chief Minister Himanta Biswa Sarma, which had settled six of 12 disputed areas. Most of the disputed regions, including the Khasi Hills, Jaintia Hills, and Garo Hills districts, have predominantly tribal populations. This means that parties’ takes on the border dispute and tribal issues will likely play a significant part in efforts to garner votes.