The Singapore Exchange Regulation (SGX RegCo) announced amendments to its Code of Corporate Governance (CG Code) on January 11, mandating Singapore-listed companies to disclose the exact salaries — and other forms of compensation — of their CEOs and directors, and cap the tenure of independent directors (IDs) at nine years. The changes aim to improve corporate governance, transparency, and accountability. While companies initially resisted the changes, the market is broadly supportive of the amendments.

Singapore’s GC Code is based on a “comply or explain” approach whereby companies must comply with guidelines or explain non-compliance. This approach has not panned out as planned, evidenced by the low rate of remuneration disclosures and the lack of gender diversity among Singapore-listed companies. Both of these shortcomings were revealed in a recent review of the GC Code.

Singapore’s new mandates stem from a review of Singapore’s CG Code disclosure, conducted by KPMG in June 2022. The objectives for the 2022 review included raising governance standards, assessing the level of compliance with disclosure requirements in the CG Code, and using the findings to assist companies with weak disclosures. The KPMG study reviewed 585 companies and provided recommendations for improvement in five areas: board diversity, board renewal, remuneration disclosures, internal controls and risk management, and shareholder engagement. The disclosure of full salaries and other incentives for CEOs and directors will apply to annual reports prepared for the financial years ending on or after December 31, 2024, and the limit on IDs’ tenures will come into effect starting January 1, 2024. 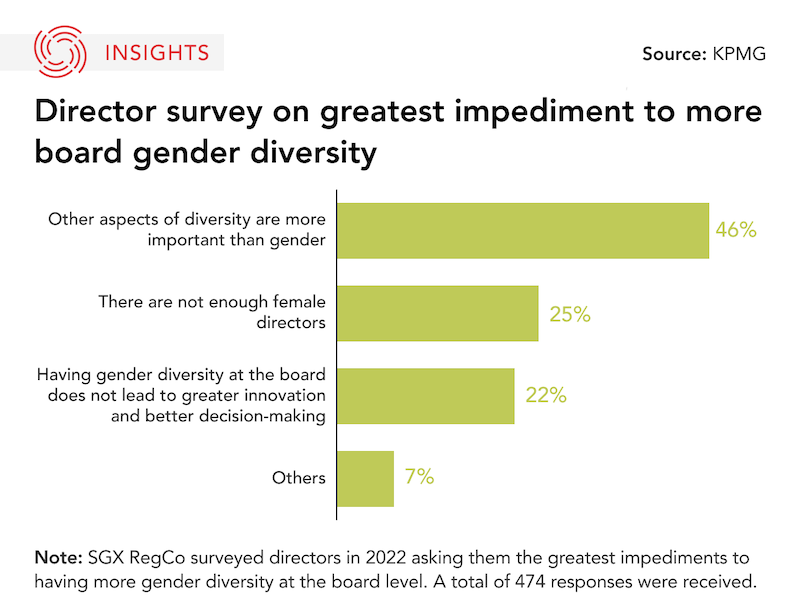 The mandate on remuneration aims to boost corporate transparency on salaries, aligning disclosure practices with global standards. The policy will put Singapore on the same path as Australia, the U.S., and the U.K., which all have similar mandates.

Singapore’s mandate on capping the tenure of IDs at nine years and the elimination of the two-tier voting system to renew IDs’ terms look to end the practice of “gaming the system” to keep long-tenured IDs. This practice hindered board renewal, diversification, and succession planning. Through board diversification, SGX RegCo is vying to increase the representation of women on boards, and inject new skills (mainly sustainability and ESG-related expertise).

In a public consultation held in October 2022 by SGX RegCo on the proposed ruling, companies resisted the revision, complaining about “talent poaching” and privacy implications, but market participants — both institutional and retail investors — were supportive of the proposal. SGX RegCo’s ruling also received support from the Corporate Governance Advisory Committee (CGAC), an industry-led advisory body on good corporate governance practices established by the Monetary Authority of Singapore in 2019. The CGAC noted the recommendations, agreed to provide guidance to companies where appropriate, and stressed the importance of making more meaningful disclosures in light of the need to manage ESG and other risks.

In 2021, SGX RegCo stated its intention to implement mandatory climate-related disclosures under ESG frameworks for several key sectors starting on January 1, 2023. The number of sectors requiring mandatory climate disclosures is slated to increase in the years to come.

In a “White Paper on Women’s Development” released in March 2022, the Singapore government outlined plans to introduce legislation on workplace fairness and equal representation of women in leadership roles to be implemented over 10 years. The January 11 mandate promoting board diversification will boost gender diversity in board recruitments.

Singapore has experienced an influx of various foreign firms seeking to set up operations within its borders over the past few years. This is partly due to the precarious political and economic state of Hong Kong, which has encouraged firms to relocate to Singapore. It's unclear whether these new mandates will encourage firms to set up shop in the city state, or drive them away.