On May 7, South Korea's Ministry of Economy and Finance announced the ‘Korean New Deal,’ a series of policies designed to support post-COVID economic recovery. Drawing an explicit parallel to U.S. President Franklin D. Roosevelt’s New Deal in which the U.S. aimed to rapidly recover from the Great Depression, Seoul has presented an ambitious vision of the rapid recovery and structural transformation of its economy. But instead of building large scale public works like bridges and roads, the Korean New Deal will focus on expanding South Korea’s digital infrastructure and services, such as data, artificial intelligence (AI), and cybersecurity, and promoting the green economy sector for climate change response. The government announced the funding and implementation details of the Korean New Deal on June 1, committing to spend 76 trillion won (approximately C$85 billion) until 2025.

The Korean New Deal outlines the direction of South Korea’s post-COVID economic policy, and it is one of the earliest, if not the first, state-initiated strategies for a post-COVID economy. In particular, the plan’s goal of accelerating digitalization is noteworthy, as it could have significant implications beyond economic recovery and promote more state-led efforts for enhanced digitalization around the world. This examination of the Korean New Deal, with a selective focus on its digital agenda, provides useful insights for other economies preparing for the post-pandemic world.

Data and AI instead of roads and bridges

The initial announcement of the Korean New Deal outlined a restructuring of the economy for the post-COVID world, with developing the capacity for innovative growth and the creation of sustainable employment as its main objectives. The policy aims to create positive effects within the short term (2-3 years) while developing a capacity for long-term growth. 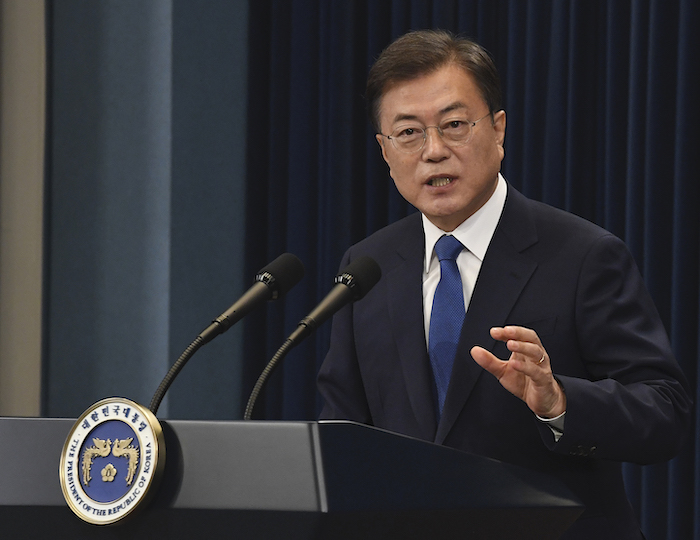 South Korean President Moon Jae-in has presented an ambitious vision for South Korea to take the initiative in the post-coronavirus global economy on the basis of its prowess in the sectors of information and communication technology, and bio-health. | Photo: Kim Min-Hee-Pool/Getty Images

The Korean New Deal revolves around the three main pillars or themes of data infrastructure, ‘untact’ (contactless) services, and the digitalization of social overhead capital (SOC), which refer to capital goods available for all, usually provided by the government. Seoul selected 10 large projects to support these three main themes, including the expansion of data infrastructure in six key sectors (finance, health, transportation, public service, industry, and small- and medium-sized enterprises), support for greater use of AI, integration of 5G networks, development of platforms for remote services, digitalization of public infrastructure (e.g. installing IoT sensors on roads for collecting traffic data), and others.

The policy does not signal a radical departure from previous government initiatives, but rather an attempt to leverage the COVID-19 crisis to add momentum to existing innovation policies.

Facing slowed growth and high youth unemployment, the Moon Jae-in administration came to power in 2017 with a focus on boosting employment and supporting growth led by innovation. In this, the government has consistently identified and supported key investment targets such as AI, data infrastructure, semiconductors, and smart cities. The investments were accompanied by policies from different ministries that have supported R&D, commercialization, and the adoption of new technologies. For instance, the government selected data, AI, and hydrogen industries as areas of strategic investment and channelled 5 trillion KRW (approximately C$6.8 billion) into these sectors. It has also launched policies such as the National AI Strategy (2019). The Korean New Deal reiterates the narrative of creating new, high-quality jobs through innovation. The language around securing a “growth engine” or “upgrading the economy” in these policies, and the sectors covered by the three pillars, were all supported by previous policies.

The COVID-19 crisis, however, has provided the opportunity for Seoul to add momentum to its innovation and digitalization policy while promoting COVID-related economic recovery through large stimulus packages. South Korea’s growth rate has declined by 1.4 per cent to 1.3 per cent in this quarter, and the Korea Development Institute projected that it could further drop to -1.6 per cent should there be additional waves of outbreaks. South Korea also depends heavily on exports, which will pose further challenges in the post-COVID world. As has been the case elsewhere in the world, Seoul has responded by injecting cash into the economy – and the Korean New Deal is an extension of this effort, but for the next five years. The Moon administration has shored up 11.7 trillion won (approximately C$13 billion) through two COVID-19-specific supplemental budget measures, and it will propose a third one that will fund the initial stages of the Korean New Deal in early June.

Further, the pandemic has accelerated the digitalization of services – from online streaming to remote work. The Korean-coined buzzword ‘untact,’ which refers to contactless digital services that include fintech, e-commerce, and/or remote work platforms, has become a key growth sector in South Korea during the COVID-19 crisis. For instance, Kakao (the Korean equivalent of WeChat) has increased its net profit by 180 per cent, and online sales, in general, have increased by 41 per cent in comparison to previous years. Further, in a recent poll, 43.8 per cent of respondents said that they support the introduction of ‘untact’ health-care services, while only 26.9 per cent were opposed. The sudden adoption of remote services spurred by social distancing policies created a demand for firms in this area (i.e. health, education, work) – and, more importantly, seems to have led to a broader shift in attitude towards these services, creating a momentum for the nationwide digitalization project.

A blueprint for others

South Korea is one of the first countries to start emerging from the throes of the pandemic, and the Korean New Deal will become a key precedent for similar policies elsewhere. Seoul has earned praise through its transparent and efficient response to COVID-19, and it now explicitly seeks to leverage this newly found soft power to ‘lead’ in the post-COVID world. Of course, the Korean New Deal fundamentally addresses urgent domestic issues, but Seoul is also keenly aware that it is setting a precedent for other governments – as can be seen in Moon’s announcement of the inclusion of the Green New Deal.

Conceptually, the Korean New Deal is a smart policy that brings together economic recovery with the long-standing goals of digitalization and quality job creation under the coherent theme of ‘New Deal.’ Further, the Moon administration seems to have the political capital to activate the policy, with its successful management of the COVID-19 crisis and the landslide victory in the April 15 parliamentary election that gave 180 out of 300 seats to Moon’s party. Stars seem to have aligned for this initiative, but there are a few things to continue watching.

First, there will be continued concerns over increasing debt. The Korean New Deal will cost C$85 billion, which hovers around 5 per cent of South Korea’s annual GDP. Seoul has already drawn close to C$13 billion of additional spending to the budget for its COVID-19 response, increasingly stoking concerns over the growing budget deficit. Further, the conservative opposition has consistently been critical of the Moon administration’s ‘handout policies’ that are not responsive to the private sector’s call for deregulatory measures. In this context, the Korean New Deal’s continuation through the next five years is not guaranteed, especially if a conservative government comes into power in 2022. 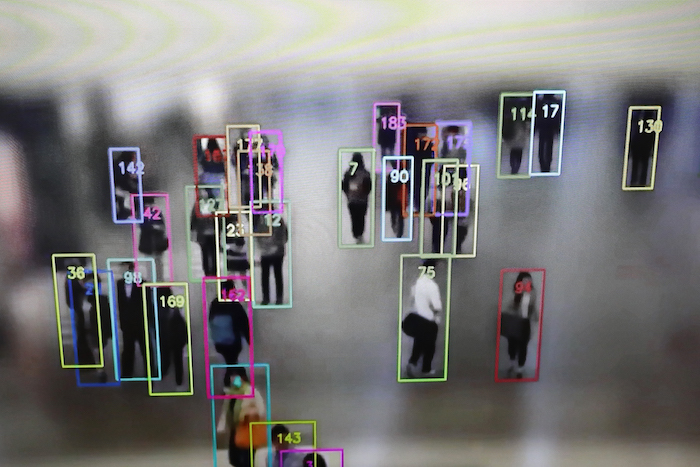 Object detection and tracking technology for people not wearing masks, developed by SK Telecom, is displayed on a screen at the company headquarters on May 26, 2020 in Seoul. Concerns over data privacy have arisen during the pandemic. | Photo: Chung Sung-Jun/Getty Images

Also, there are concerns over the social issues linked to rapid digitalization, which have come to the surface during the pandemic. For instance, the collection and disclosure of contact tracing data by health authorities has led to the exposure of specific minority groups, such as religious minorities and LGTBQ+. Meanwhile, the roll-out of remote learning during school closures highlighted the ‘digital gap’ among students that limit the full participation of those from lower-income groups. The Korean New Deal seeks to address these social issues to a limited degree through the expansion of digital infrastructure in rural areas and within the public school system. Further, the Korean New Deal will be accompanied by efforts to strengthen the social safety net by expanding employment insurance and training for the future. Beyond these, however, there are more social, legal, and cultural dimensions to digitalization that should be addressed in tandem with the new policy to ensure equity and inclusivity.

Overall, while there are some unknowns, the Korean New Deal brings together crucial national priorities at the right time, and it could be an example of a successful post-COVID recovery policy, similar to the country’s policy response at the height of the pandemic in South Korea. It also stands as case study for new national policies in the post-COVID world, which will see different attempts to address the same challenges Seoul seeks to tackle. South Korea’s efforts on the Korean New Deal could provide useful insights for Canada and other countries as they formulate their own post-COVID economic road map.