Despite initial setbacks with mass community outbreaks through a Christian cult, South Korea has succeeded in ‘flattening the curve’ without resorting to China’s harsh measures. The number of cases has gone down from 813 during the peak at the end of February to around 100 at the end of March. South Korea’s approach to COVID-19 has been praised for leveraging the strengths of strong government while upholding transparency and civil rights. Among the many tools Seoul has used, ‘aggressive’ testing has been highlighted as one of the key success factors.

Even so, South Korea’s testing numbers do not overwhelmingly outnumber those of Canada. As of April 7, South Korea had conducted 477,304 COVID-19 tests, while Canada had tested 346,507. These numbers roughly translate to one test for every 108 people in South Korea, and one for every 109 people in Canada. But since health care is a provincial matter in Canada we see significant regional differences in per capita testing across the country. Alberta and British Columbia has been conducting more tests per capita than South Korea, while Ontario’s per capita testing is about one for every 181 people. This dispatch examines South Korea’s approach to COVID-19 testing with Canadian implications in mind, highlighting key nuances and takeaways from Seoul’s experience with the pandemic, ultimately making a case for more open COVID-19 testing in Canada.

South Korea’s government has arguably made COVID-19 testing more accessible than anywhere in the world. Because many infected patients are asymptomatic, having the option of getting tested has added to a greater sense of safety and public trust in South Korea. 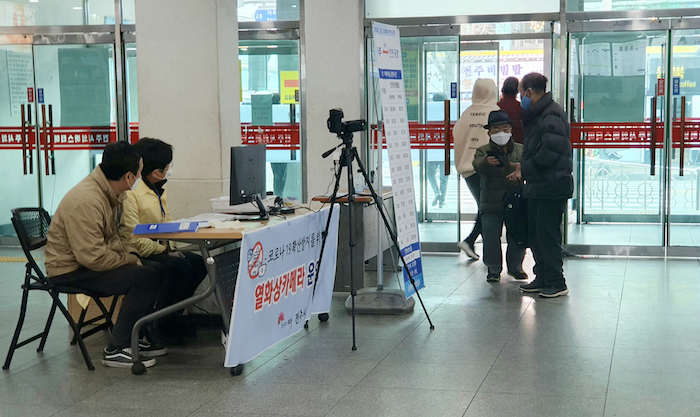 In the aftermath of the Middle Eastern Respiratory Syndrome (MERS) outbreak in 2015, the government established a policy allowing for rapid evaluation and distribution of diagnostics for infectious diseases. This helped the South Korean government streamline production of COVID-19 test kits early on. Four Korean companies received emergency approval at the end of January to produce and distribute testing kits; they have since  produced 14,000 kits weekly and have the capacity to increase production threefold, if necessary. South Korea has started exporting these kits abroad with fast-tracked import approvals – including to Canada, which approved the purchase of SolGent Co.’s kits on April 6.

In addition, testing has been made available through the agile establishment of a variety of testing centres. The Ministry of Health and Welfare (MOHW) has set up more than 612 testing centres as of April 2. In addition to the ‘drive-through’ testing centres that have been replicated around the world, the city of Jeju set up a ‘walk-through’ clinic at the Jeju International Airport on March 30 to allow for  visitors to get tested, and the Seoul Metropolitan Government announced a plan to set up a similar system that started April 3. Today, anyone in South Korea wishing to get tested for COVID-19 is able to do so; the test is free for those with respiratory symptoms or those with a doctor’s referral, but otherwise costs 160,000 KRW (C$185).

South Korea’s aggressive testing policy is notmerely a product of a strong political will to deal with this specific issue, but is also based on confidence in its health-care system and institutionalized responses to national-scale disasters stemming from the country’s experience with events such MERS and SARS.

South Korea’s universal health-care system is deemed one of the best among Organisation for Economic Co-operation and Development (OECD) countries, ranking second for the availability of hospital beds with 12 beds per 1,000 inhabitants. As of 2018, South Korea listed 3,553 public health clinics (not including hospitals) around the country, which began converting into COVID-19 testing centres as the outbreak expanded. Further, the South Korean government has quickly organized the headquarters within both the MOHW and the Korea Centers for Disease Control and Prevention (KCDC) to liaise with local governments to rapidly deploy over 600 COVID-19 testing centres.

The centralized approach to testing in South Korea is consistent and agile, which contrasts with Canada, where health care is under provincial jurisdiction. While British Columbia’s (1 in 101) and Alberta’s (1 in 67) test-per-capita numbers compare favourably to South Korea’s (1 in 108), Ontario (1 in 181) lags behind significantly. Further, the divergence of investment in health-care systems among provinces will emerge more prominently if Canada continues to see a surge in the number of cases. While appreciating differences in context, South Korea’s agile response and deployment of testing across the country does demonstrate some advantages of a more centralized system. 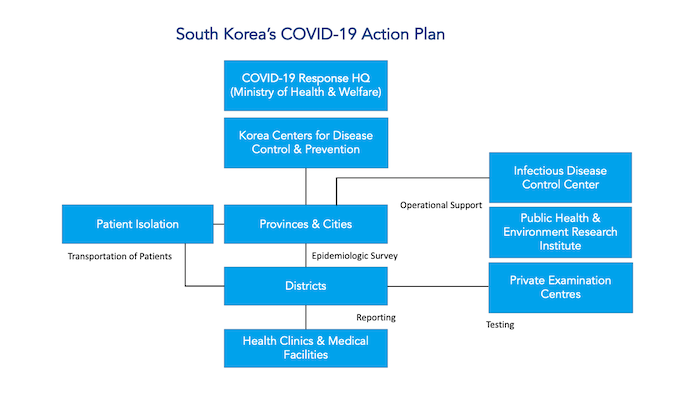 The case for more open testing?

Availability of testing in South Korea has contributed to greater public trust for its health-care system. At the onset of its outbreak, the aggressive approach to testing was criticized for being too excessive, unnecessarily burdening hospitals, and even creating a negative image for South Korea, which was yielding an extremely high number of confirmed patients on a daily basis. However, with the deadly outcomes of alternative measures in Italy, Spain, and the U.S. now surfacing, the South Korean government’s approach has generated strong public trust in the system – both domestically and internationally.

According to MOHW data from April 7, 44 per cent of South Korea’s COVID-19 patients have been under the age of 40, a population group that would have been less represented had Seoul applied the same criteria that Canada has been using (for instance, in B.C., only “hospitalized, or likely to be hospitalized; health-care workers; residents of long-term care facilities; and, (those who are) part of an investigation of a cluster or outbreak” are tested). The limits of COVID-19 testing in Canada have already raised concerns, with reports of concerned citizens amid arguments that it is difficult to ascertain whether the curve is actually flattening because the current data is likely to not be representative without wider testing. As Canada acquires a greater number of test kits through imports and domestic production, and seeks opportunities to hasten the return to normalcy, a policy of more open testing, like that in South Korea, might be worthwhile to consider.