Taiwan held its “nine-in-one” local elections on November 26, with citizens voting for regional officials from mayor to village chief. The opposition Kuomintang (KMT) won 13 out of the 21 mayor and county magistrate seats, while the incumbent Democratic Progressive Party (DPP) secured only five seats. The voter turnout rate, at 61 per cent, was about five points lower than the average in past local elections. President Tsai Ing-wen resigned as DPP party chair following the big loss this time around.

This year, compared to 2018 — and certainly compared to the 2016 and 2020 presidential election cycles that saw swells of support for Tsai — the DPP underperformed across the board, with lower turnout even in historically deep-’Green' jurisdictions. These election results are a sharp blow to the ruling party, whose campaign was not widely persuasive in a year of worldwide inflation, housing unaffordability, and cross-strait anxieties. 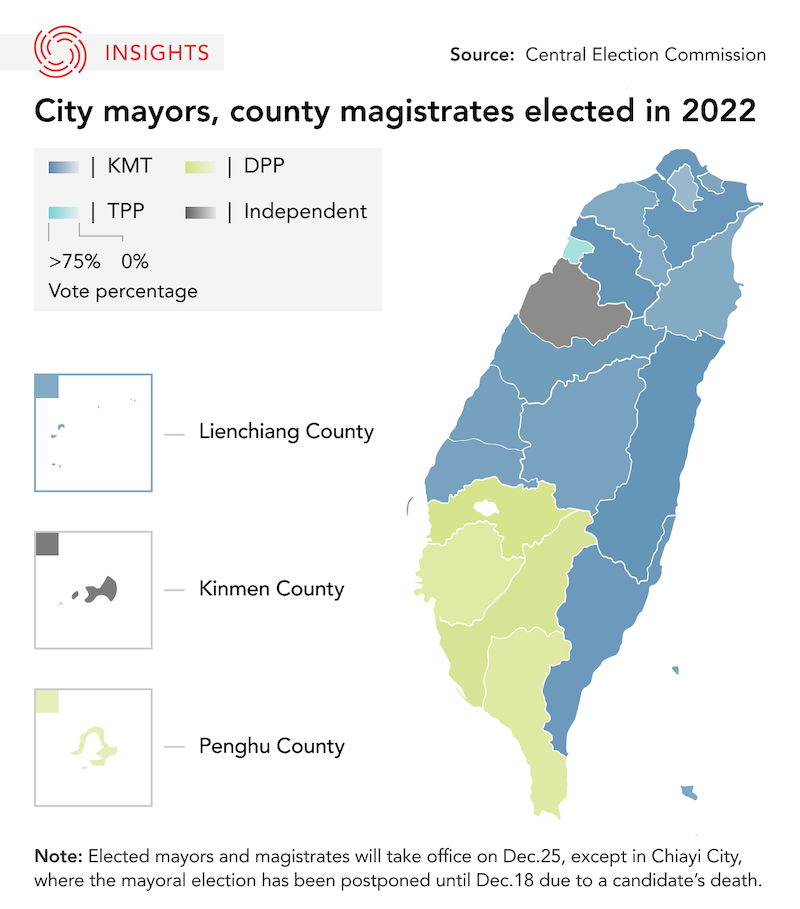 Notably, centrist Taiwan People’s Party (TPP) candidate Ann Kao Hung-an took the mayor seat in Hsinchu City, as the first third-party mayor or county magistrate in Taiwan's electoral history. At 38 years old, she is Taiwan’s youngest-ever mayor or county magistrate, and Hsinchu’s first woman mayor. Women’s political participation has risen at all levels in recent years as Taiwan has made strides on gender equity and LGBTQ+ inclusion. That progress continued through this election cycle, with 20 women nominated for mayoral or county magistrate seats across Taiwan. Kao’s victory is also a galvanizing moment for the TPP, which has solidified its position as Taiwan’s third party. TPP party chair Ko Wen-je's case for running for president in 2024 has grown stronger as a result.

Taiwan’s long-standing Blue-Green binary has defined its political culture, but the rise of the TPP may erode some of the island’s polarization. However, the nascent third party faces an uphill battle. It may well evolve into a ‘light-Blue’ force rather than the ’White’ alternative it brands itself as, thus losing its appeal among moderate ‘light-Green’ voters. Ko Wen-je's potential presidential run – which, like other campaigns, runs the risk of being divisive, or even explosive – could be a boon or a bane for the TPP’s standing, given the party’s relatively thin political capital.

Lower turnout in a local election cycle compared to relatively higher-stakes presidential elections isn’t surprising, but it is significant that the DPP failed to rally the same level of grassroots enthusiasm that propelled Tsai into the presidency in 2016 and kept her there in 2020. Throughout the campaign, analysts noted that the DPP’s message of progressive Taiwanese identity had limited resonance in local races. Policy issues like affordability, housing, senior care, and pollution tended to dominate discourse at the city and county levels. Scandals commanded voters’ attention, too, which plagued both Blue and Green candidates.

The KMT is seen as having an historic advantage in its local networks, built during its single-party rule between 1949 and 1987. These networks sustain the KMT’s relevance across many of Taiwan’s jurisdictions. The election of Chiang Wan-an, great-grandson of dictator Chiang Kai-shek, in Taipei harks back to the KMT’s past, a deeply divisive era for Taiwanese. Chiang Wan-an is widely seen as a viable presidential candidate, which will elevate the salience of KMT’s political symbolism in the 2024 election.

Taiwan’s next presidential election will be held in January 2024. The parties have 13 months to choose candidates, rally around respective campaigns, and fine-tune their messaging.

Pressing issues like low salaries and a looming housing crisis confront the new cohort of local officials, particularly in large cities. Analysts noted that in local races, candidates’ policies often did not diverge significantly. Taipei’s new mayor, Chiang Wan-an, has promised to incorporate policy proposals from other candidates into his plans as mayor. It remains to be seen whether a new wave of KMT local leaders will take advantage of their victory and build goodwill.

Sixty-seven per cent of Taiwanese citizens consider themselves solely Taiwanese, rather than both Taiwanese and Chinese, or solely Chinese. Identity is a key indicator of voter behaviour in Taiwanese politics, particularly when presidential elections bring the island’s uneasy relationship with mainland China into focus. Paying attention to the shaping of identity in Taiwan is necessary as the island approaches another important election in 2024.