The Vietnamese government signed a C$21 billion Just Energy Transition Partnership (JETP) with the G7 countries, Norway, and Denmark to accelerate Vietnam’s energy transition from coal to more renewable sources of energy. If the partnership meets its goals, Vietnam will peak its greenhouse gas emissions by 2030 instead of 2035 and reduce its annual power sector emissions by 30 per cent by significantly increasing its reliance on solar and wind for power generation.

The Vietnamese government announced on December 14 the conclusion of a JETP with the G7 countries, Norway, and Denmark. The partnership aims to help Vietnam reduce its reliance on coal and transition to more renewable sources of energy through a mix of loans, grants, technology transfers, and technical assistance programs. The contributions to the JETP include C$10.5 billion in public loans and grants from the partner countries along with the Asian Development Bank and a commitment to mobilize a matching C$10.5 billion in private investment from a series of private financial institutions.

The JETP will help Vietnam implement its National Climate Change Strategy 2050, commit to its earlier approved plan to phase out coal from power generation by 2040, and achieve net-zero carbon emissions by 2050. The funding from the partnership is expected to help Vietnam limit coal-fired power production to 30 gigawatts, instead of 37 gigawatts (planned earlier), and increase its share of renewables for electricity generation by 30 per cent by 2030 compared to earlier plans. 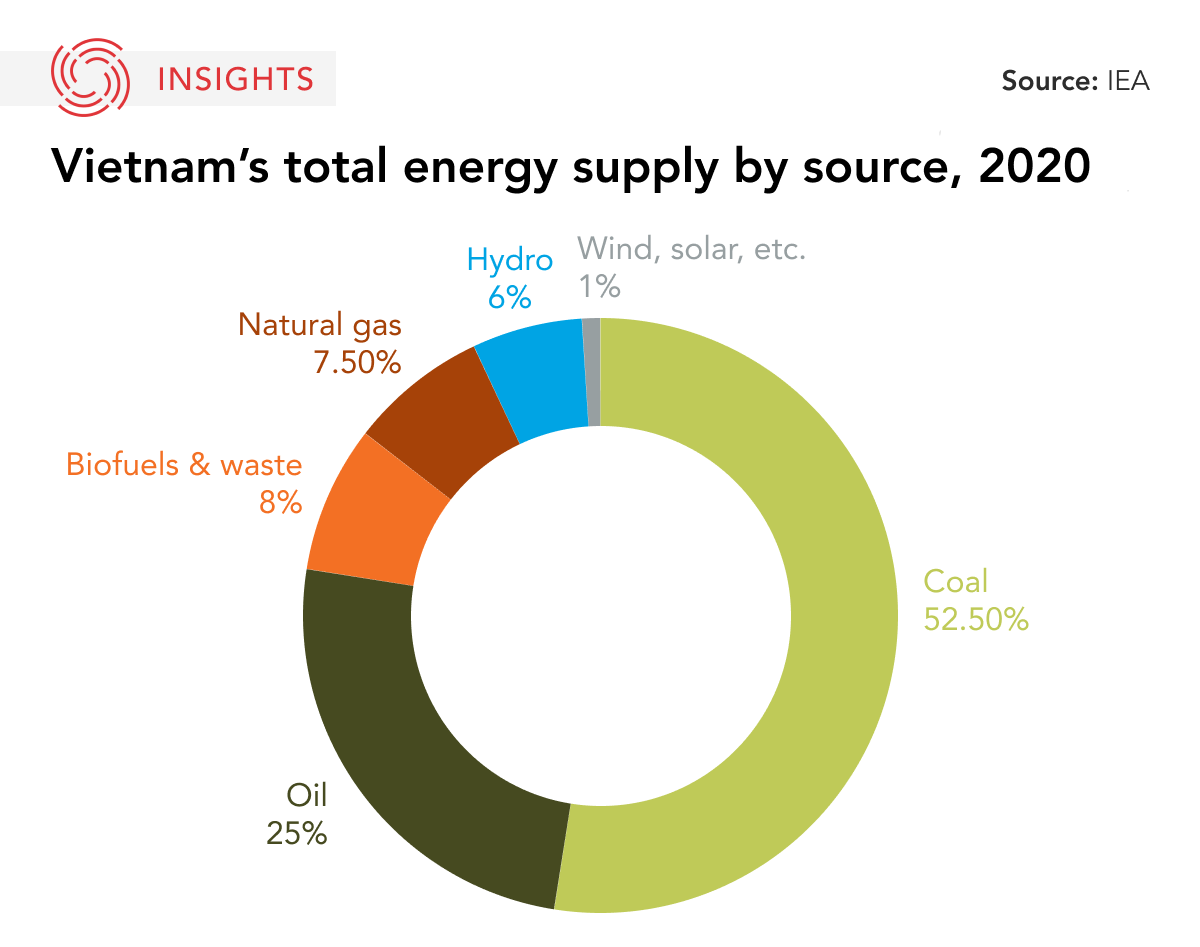 As the world’s ninth largest coal consumer, Vietnam faces substantial challenges ahead to successfully transition to renewables. The country has an extremely high-polluting power sector, the second in the region after Indonesia, with coal accounting for about half of the country’s energy supply. A significant number of Vietnam’s coal-fired plants have only been in operation in the last 10 years and are far from their retirement age. The decommissioning of these plants will be costly and Vietnam’s high reliance on coal will pose challenges to the development of renewable sources of energy. Vietnam’s elongated territory and its underdeveloped power grid add to the difficulty of further integrating  renewables for power generation and entail substantial investment.

Vietnam's contribution to global greenhouse gas emissions is relatively small at about one per cent, but due to its high growth rate over the last two decades, Vietnam’s emissions have been accelerating at one of the fastest rates in the world. The biggest challenge ahead for Vietnam will be balancing its rapid growth and its efforts to phase out coal. A recent report by the World Bank estimates that people in Vietnam are among the most vulnerable in the world to climate impacts due to the country’s long coastline. The report further highlights that Vietnam’s coastal provinces and cites, especially in the South, could be submerged by 70 per cent by the end of the century. With the impacts of climate change already evident and the emissions of a rapidly growing economy accelerating, a just energy transition that delivers results promptly will be critical.

While some environmentalists applaud the conclusion of this new partnership, activists have raised concerns over Vietnam’s record on human rights and have pressured the government to release imprisoned environmental activists, some of whom have languished in jail for years. One of them is Nguy Thi Khanh, winner of the 2018 Goldman Prize, also called the “Green Nobel.” Her imprisonment for tax fraud has been criticized and the arrest largely seen as part of a broader effort to silence climate activists in Vietnam. The imprisonment of these activists had been a point of contention between Vietnam and the JETP partners during the negotiations, delaying its conclusion.

The Vietnamese government is now expected to develop an implementation plan for the JETP within the next 12 months. As Vietnam’s economy relies significantly on the export of products from energy-intensive industries, the transition to renewable energy poses considerable risks. According to a study from McKinsey and Company, Vietnam has one of the highest transition-exposure scores due to its high share of employment and GDP coming from emissions-intensive manufacturing sectors. Transition-exposure scores are based on an estimation of investment needed and expected cost associated with the energy transition. The investment pledged under Vietnam’s JETP will only succeed if it also brings technology transfer and if it addresses the social consequences resulting from the transition.