Japan’s rapidly declining and aging population has exacerbated issues in the electoral system, as the value of rural votes significantly outweighs urban votes. While some argue for reducing vote-value disparity to ensure the equality guaranteed by the constitution, others emphasize the importance of rural representation in the Upper House.

Shortly after the July Upper House elections in Japan, 16 lawsuits – claiming that the vote-value disparity of up to 3.03 times violated the constitutional guarantee for fair elections – were filed in 14 High Courts and their branches. Amid these accusations, the House of Councillors began its first “Commission on the Constitution” since the July elections, in which Chairman Otsuji Hidehisa of the ruling Liberal Democratic Party (LDP) recognized the necessity of promptly addressing the Upper House electoral system. The meeting concluded with the establishment of another Reform Council, consisting of representatives from each political party. Observers expect the issue of “joint districts,” the 2015 amendment that merged several low-populated prefectures to reduce vote-value disparity, to be a key area of discussion as opinions differ between parties regarding the importance of prefectural representation versus the equality of each vote.

Vote-value disparity has been an ongoing issue in Japan due to its dwindling population, especially in rural areas. Yet the LDP, alongside several other parties, argues that each prefecture should be represented in the Upper House regardless of population. Conversely, the Komeito, LDP’s coalition partner, has criticized the idea of making the Upper House representative of the rural regions while disregarding disparity. Both argue for “equality before the law,” but differ in the prioritization of prefectural or individual representation. 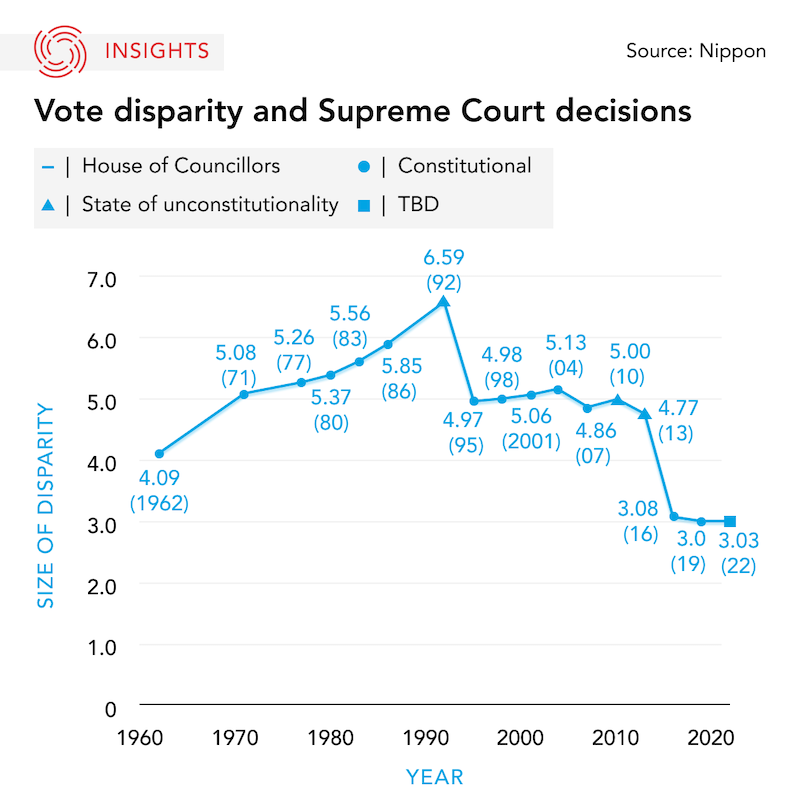 The Supreme Court has periodically ruled on the constitutionality of Upper House elections since 1962.

Despite the rulings, any real change will come from the Reform Council and subsequent government bills to address vote-value disparity in the Upper House, which have been limited. Analysts note that given the LDP’s large rural support base, the party would benefit from maintaining the status quo. The combination of low-populated prefectures like the 2015 joint district could severely impact LDP seats within the Upper House.

Progress hinges on government policies: While the Kishida cabinet has recently approved a bill to rectify vote-value disparity in the Lower House by changing constituency borders, the same changes will be impossible for the Upper House districts. Given the LDP’s support in abolishing joint districts, a move towards prefectural representation from the government may be expected.