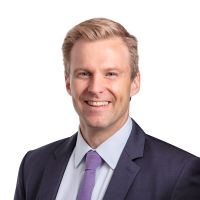 Brian Gallant, Q.C., is the CEO of Space Canada. He is a business executive, thought leader, and he was the 33rd Premier of New Brunswick.

Brian was the founding CEO and now Expert Panel Member of the Canadian Centre for the Purpose of the Corporation. He is the Special Advisor to the President of Ryerson University on Innovation, Cybersecurity, and Law, as well as an Entrepreneur in Residence for the DMZ incubator. He also frequently provides business and political analysis as a media commentator.

Prior to elected office, Brian practiced corporate commercial law. He has university degrees in business and law from the Université de Moncton as well as a Master of Laws from McGill University.

Brian is the co-author of a major research report linking profit with purpose entitled Canadian Voices on the Role of Business in Society.

Brian is supportive of many causes and initiatives as a member of several boards of directors including the Asia Pacific Foundation of Canada, the Rogers Cybersecure Catalyst, the Canada’s Sports Hall of Fame, the Canadian Olympic Foundation, the Canadian Urban Institute, the Michaelle Jean Foundation, and the Beausejour Family Crisis Resource Centre.