With the BC-India Partnership Summit taking place in Vancouver this week, British Columbia and Indian government officials and private sector leaders will focus on how to leverage B.C.’s infrastructure and clean technology expertise to support India’s Smart Cities Initiative, the Government of India’s urban renewal strategy to develop 100 cities across the country to make them citizen friendly and sustainable.

Strategically placed as Canada’s Asia Pacific Gateway and featuring a large and dynamic Indian diaspora community, B.C. in particular has strong ties to South Asia. There is a solid, well-established foundation for B.C.-India trade and investment; however, there is room and desire to further develop that relationship. British Columbians recognize the importance of India to their province’s growth and prosperity but, contrary to their own government’s position, British Columbians still have hesitancies towards certain aspects of increased trade with the country. Using the Asia Pacific Foundation of Canada’s 2016 National Opinion Poll (2016 NOP) data, we can see how British Columbians view their economic relationship with India and where they see that relationship headed in the future.

India has promising future economic prospects. With its GDP growing steadily since 2012, the World Bank is predicting India has the potential to become the world’s third-largest economy within 10 years. India also has a growing middle class, currently 50 million, which is expected to reach 200 million in five years, and 475 million within 15 years, surpassing the size of China’s middle class within just 12 years. 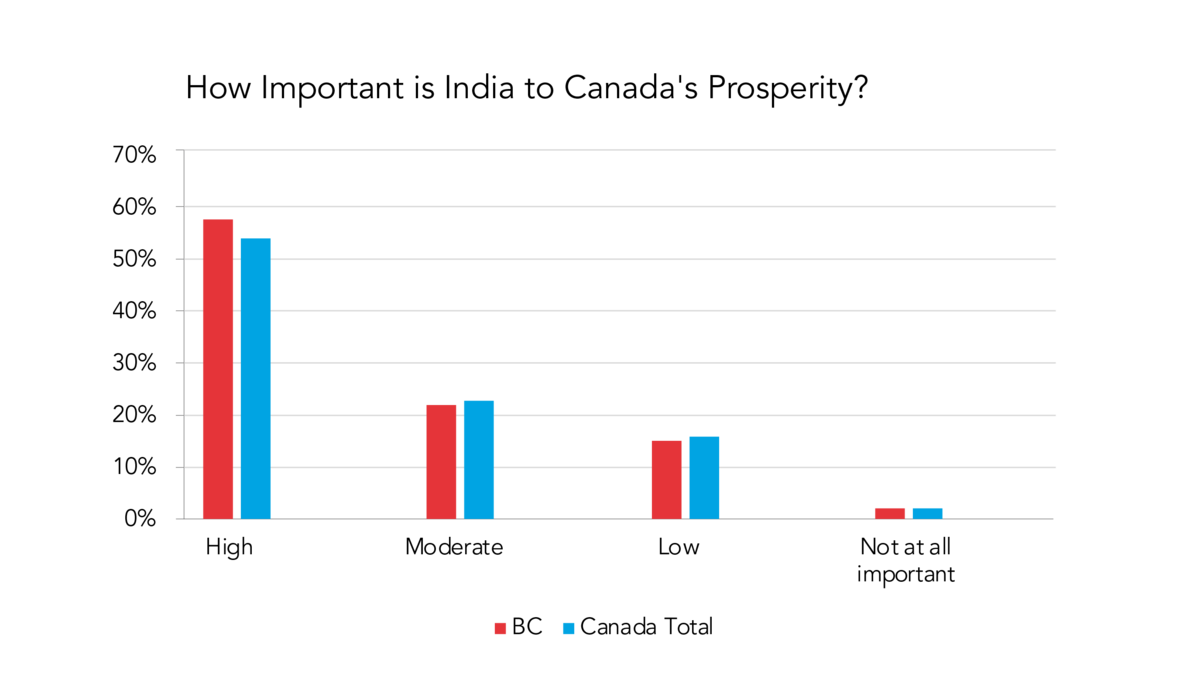 While the strength of the B.C.-India relationship is strong, it is especially clear when looking at opinions of free trade that B.C. has a gap to close in order to catch up with the rest of Canada. British Columbians are three per cent less likely than the rest of Canadians to support the Canadian Government entering a free trade agreement with India. They are more likely to support free trade with India than China or the Association of Southeast Asian Nations (ASEAN), but less likely than with Australia or Japan. On the whole, British Columbians are less likely to embrace free trade agreements with other countries than any of their Canadian counterparts. The Government of BC may need to address this issue in the near future, as current negotiations are taking place for a Comprehensive Economic Partnership Agreement (CEPA) between Canada and India. 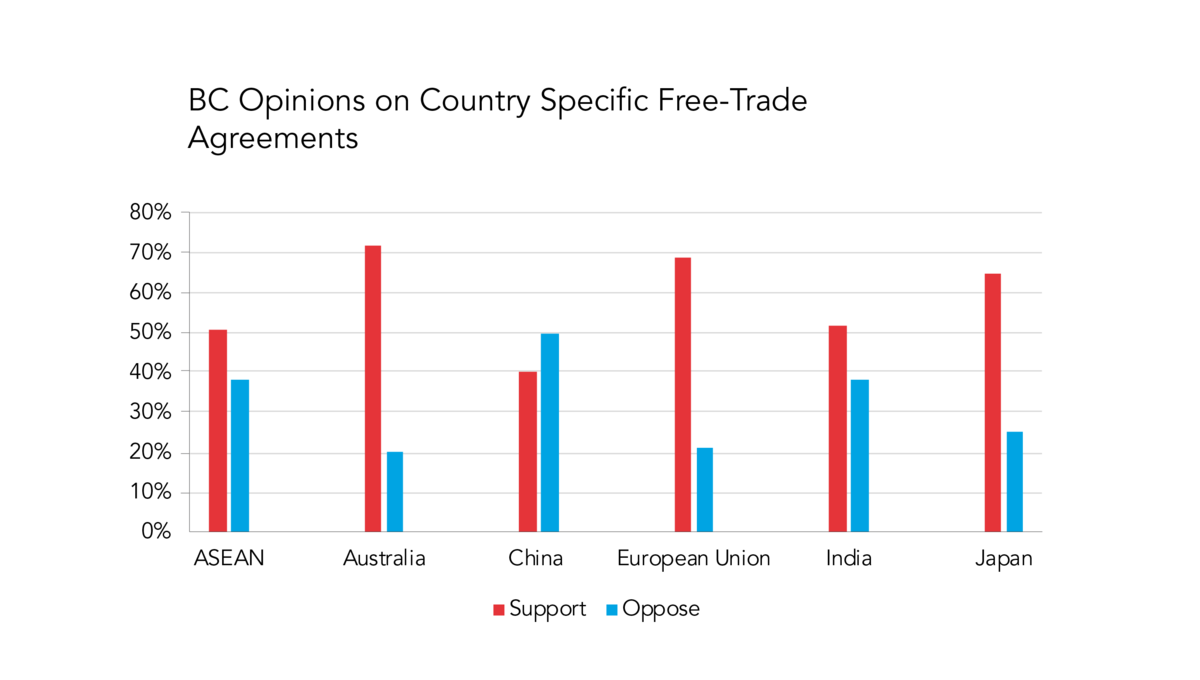 Private Investment from India is the Key to BC’s Heart 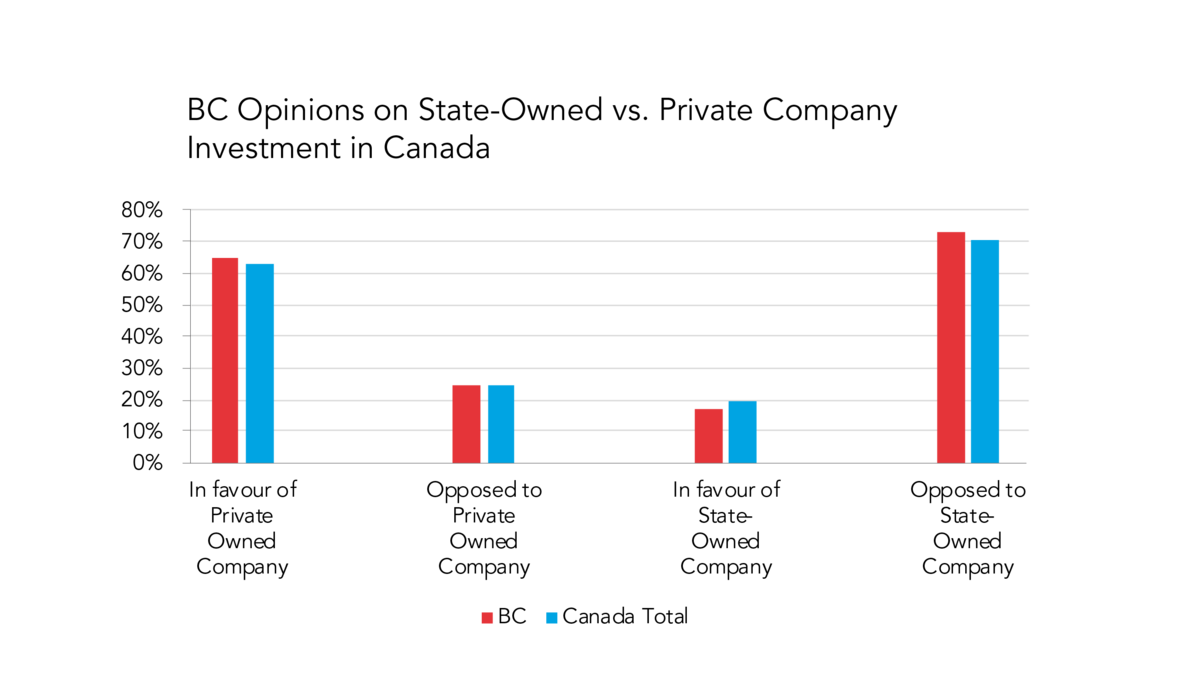 While there is clear opportunity and desire to strengthen economic relations between British Columbia and India, British Columbians’ opinions on India are still mixed. Through events such as the BC-India Partnership Summit, this relationship can continue to develop. But the provincial government may need to capitalize on British Columbian’s positive feelings towards India and better demonstrate how greater trade and investment linkages can allow British Columbians to access future economic opportunities with this increasingly vital trading partner.

Pride Abroad: Canada's Support of LGBTQ Activism To Win at Trade With ASEAN, Canada Must Also Focus on Security and Culture From A to Z: A Lesson in Air Defence Identification Zones and Depoliticizing Airspace