From A to Z: A Lesson in Air Defence Identification Zones and Depoliticizing Airspace

One of my favourite things while flying is to watch the tiny little airplane on the flight-map screen as it traverses territories far below. I wait excitedly for just the moment when it crosses a mountain range, an ocean, a great lake or a border. I’m sure I’m not alone in this exciting pastime, but how often do passengers go farther and consider the boundaries that they are also crossing in the sky?

It may be surprising to find out, but every portion of our earth’s atmosphere has been divided into specific flight information regions (FIRs). These regions are there to provide information to pilots on how to conduct safe and efficient flights, steering clear of potential hazards and other air traffic.

Unfortunately, this established order prioritizing safety and aircraft security is threatened when countries decide to politicize airspace, and the end result can be an incident as grievous as the 1983 downing of Korean Airlines Flight 007 by Soviet fighter jets. There are indications that such politicization may be ramping up in the South China Sea.

The South China Sea recently was the subject of an International Tribunal Ruling at the Permanent Court of Arbitration (PCA) in The Hague, establishing whether access to the region should be determined by United Nations Convention on the Law of the Sea (UNCLOS) or by China’s claim through the nine-dash-line. The nine-dash line being a demarcation line used by China outlining the area they claim in the South China Sea. The case went against the Chinese in favour of the Philippines, ruling that China could not claim an exclusive economic zone within the Spratly Islands archipelago, that it had violated the Philippines’ sovereignty by building artificial islands, and that China failed to stop its fishermen from causing environmental damage. The Chinese are disputing the outcome and there is now a possibility China may take the dispute from the sea to the sky. 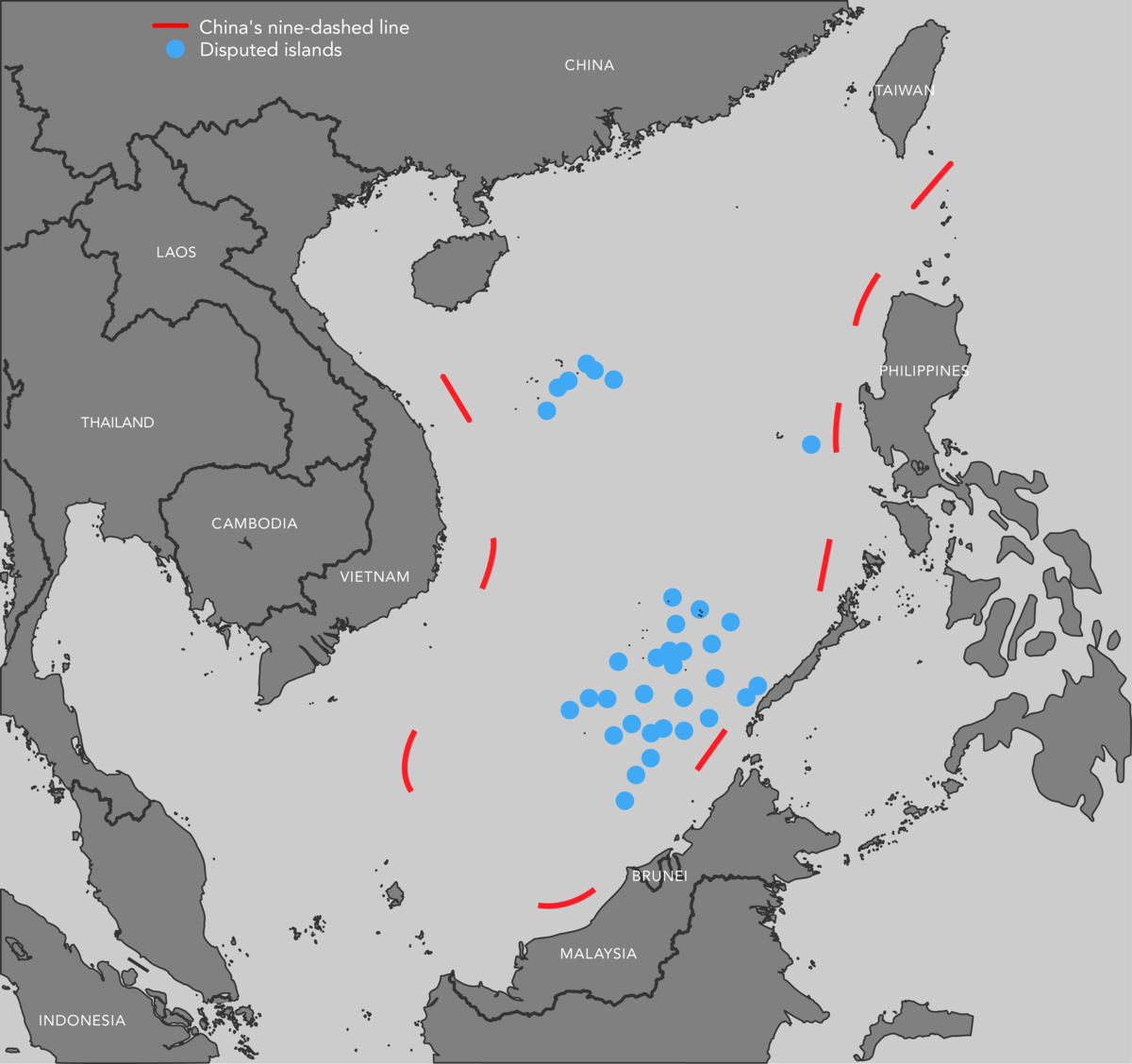 The issue of ‘Air Defence Identification Zones’ (ADIZs) and the possibility of one being implemented in the South China Sea was discussed by a number of commentators in the lead up to the PCA’s decision. Their views ranged from approval of an ADIZ as a face-saving response for China, to considering it a serious threat to security in the region that could compromise China’s own interests by increasing tensions with neighbours and undermining international confidence in Beijing’s judgement.

Beijing continues to denounce the ruling, though it has yet to make any concrete, responsive moves. While Beijing weighs its options, the policy community needs to further examine ADIZs and the politicization of airspace in the interests of an informed, tempered and stabilizing international response, no matter what China’s future actions may be.

Asia, ADIZs and the Politicization of Borders in the Air

‘What exactly is an ADIZ?’ is a common question. Air Defence Identification Zones are unilaterally determined areas that extend beyond a country’s traditional airspace, where that country demands notice from aircraft flying within the zone. ADIZs originated during the Cold War, when countries wanted an early warning system for detecting incoming aircraft. Under international law, there is little mention of ADIZs, other than in the 1944 Chicago Convention of International Civil Aviation, which authorizes the zones but gives no further instruction on implementing or operating them. While ADIZs should not be confused with traditional FIRs, they are both technically used for the same basic purpose: increasing communication, safety and security.

To understand the implications of a potential ADIZ in the South China Sea, it is important to understand both the long- and short-term history of ADIZs. ADIZs remained in relative obscurity from 1944 until 2013, when they hit mainstream politics and debate. In November that year, China announced its implementation of an ADIZ in the East China Sea and the international community reacted with a mixture of condemnation and confusion. The issue was that the Chinese ADIZ overlapped with existing Japanese, South Korean and Taiwanese zones, and included areas viewed to be contested territory, such as the Senkaku/Diaoyu Islands (contested between China and Japan) and Socotra Rock (contested between China and South Korea). 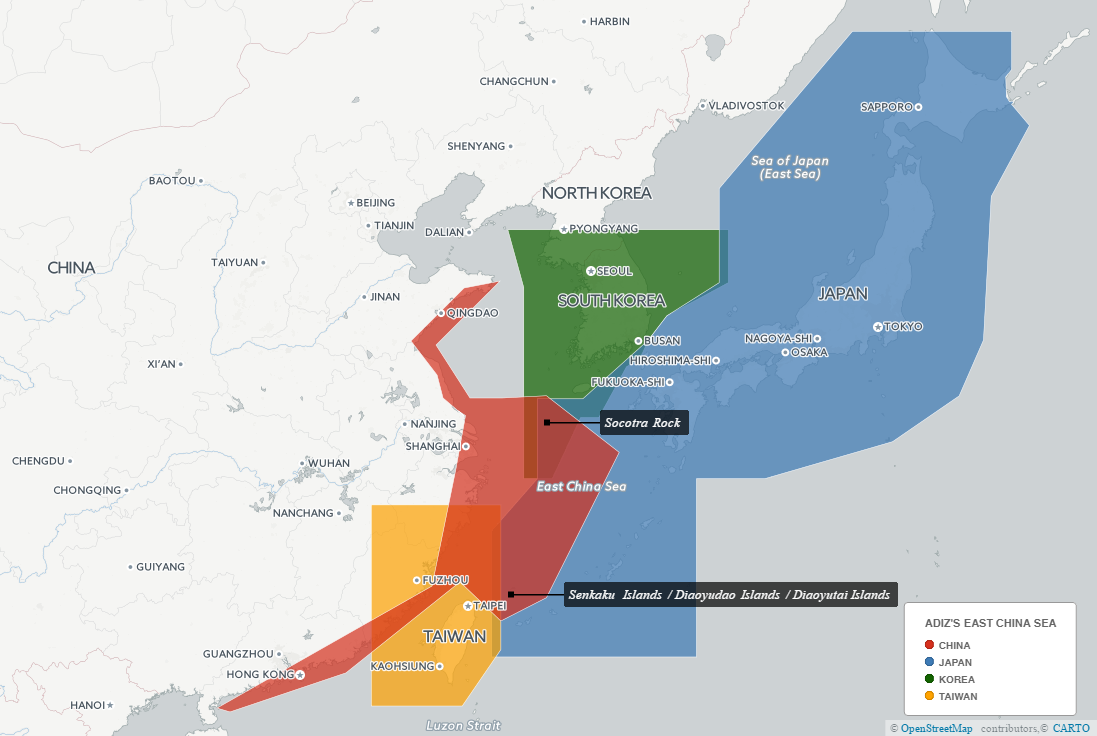 Because of the overlap, Japan interpreted China’s move as an assertion of sovereignty, calling it dangerous and one sided. China was also criticized for the seemingly unreasonable demand that all aircraft, whether entering actual sovereign Chinese airspace or not, identify themselves. On both moves however, China was in fact not in the wrong. ADIZs, as mentioned above, provide no support for sovereignty claims under international law, and as for requiring all aircraft to identify themselves, this is a requirement for safety within the ADIZs of many other countries, including the United States.

The curious thing about modern ADIZs is that a large majority are in Asia; out of the sixteen countries maintaining ADIZs today, ten of them are in Asia. It is also only in Asia where the intended use of ADIZs has been shifted to include politicized concepts of borders in the air. Developments in the East China Sea are the beginning of a dangerous trend, moving regional disputes from the land and water into the air.

There are, however, positive examples of international relations regarding ADIZs that China and its detractors should bear in mind. Canada and the United States have had longstanding ADIZs that have led to little, if any, disruption of flight paths or increased tension between the two countries. Even India and Pakistan have reached an agreement on Pakistan’s ADIZ, which extends past its sovereign territory along the Pakistan/India border.

As many commentators speculated, China may have been waiting until after the recent G20 summit to make its move regarding the PCA’s decision. With the G20 now behind us, the issue of the South China Sea, and the possible implementation of an ADIZ, is likely to come to a head some time in the near future. So next time you are sitting on a plane, watching the screen as you cross over geographic features, consider all of the artificial boundaries you are also crossing. Consider the regulations and communication systems that are in place to keep us safe as we travel from one country to the next. Politicizing airspace can have terrible consequences and it is important for the international community to change its tone and prioritize the original and intended use of airspace regulations, including ADIZs, as tools for maintaining safety and security, not elevating land conflicts to new heights.

Pride Abroad: Canada's Support of LGBTQ Activism To Win at Trade With ASEAN, Canada Must Also Focus on Security and Culture BC’s Flip-flopping Opinions on Trade with India