It is a common perception that the old are conservative in their outlook, while the youth is far more liberal. But is there a generation gap in public opinion between the young and the old in Canada in their attitudes to Asia? Findings from the Asia Pacific Foundation’s 2016 National Opinion Poll indicate that the answer to this question is more complex than a simple yes or no.

The opinions between various age groups in Canada vary across a range of issues. In terms of engagement with Asia, seniors appear to be the most supportive. 55% of respondents over the age of 65 agree that strengthening economic and political relations with Asia should be Canada's top foreign policy priority. In comparison, only 43% of those aged between 34 and 44, and 48% of those under the age of 35 agree with this statement.

In several instances, we see convergence in the opinions of youth (those under 35) and seniors (those over 65). A large number of youth (72%) and seniors (71%) believe that Canada should undertake friendly cooperation and engagement with China in response to its rising global power.

Speaking overall, Canadians largely support free trade agreements between Canada and other countries. In this case as well, we see that seniors are the largest proponents amongst all age groups, with 82% supporting FTAs.

In terms of cultural engagement, when asked if provincial governments should place more emphasis on teaching about Asian history and culture in provincial education systems, more than 50% of the respondents in each age group agree. Again, this has the highest support from seniors, with 69% agreeing with the statement. Canadians also largely support increasing the number of student exchanges and university agreements between their provinces and Asia. Once again, this proposition has the greatest support from seniors (77%). However, most age groups oppose teaching Asian languages in schools. Youth are divided – 45% support placing more emphasis on teaching Asian languages in schools, while 45% oppose it.

Q: Generally speaking, would you say each of the following countries or regions is important or not important to Canada's prosperity

Most respondents in all age groups rank China in the high range, with youth (72%) and seniors (73%) considering China to be more important compared to the other age groups. 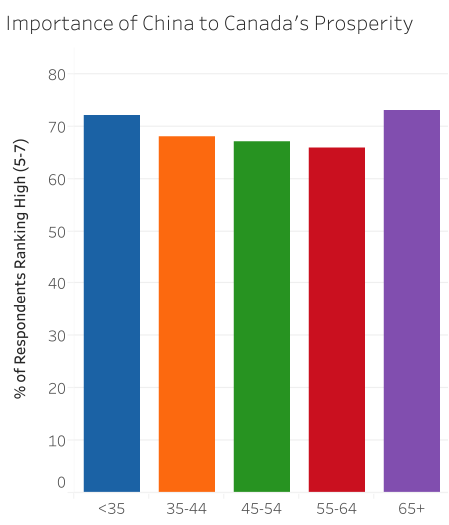 70% of respondents aged 55-64, and 69% of respondents over the age of 65 think that the government is allowing too much investment in Canadian residential real estate from China. Comparatively, only 51% of the youth perceive the same. Similarly, most age groups oppose investment from state-owned companies from China if the company was trying to buy a controlling stake in a major Canadian company. The opposition is the greatest for those aged 55-64 (89%). In this instance as well, youth are the least opposed (65%). This trend also holds for state-owned investments from Malaysia, India, South Korea, Japan, and Australia.

Moreover, 64% of those aged 55-64 think that state-support for businesses in Asia provides unfair advantage to Asian companies doing business in Canada. Comparatively, only 46% of the youth have the same opinion.

Canadians of all ages are divided about whether Canada would benefit from more Asian investment in the country, with about equal numbers of respondents agreeing and disagreeing with the statement. Most Canadians, particularly seniors (70%), agree that the Canadian government should do more to facilitate trade and investment missions for Canadian companies to visit Asian countries. Moreover, although 51% of seniors agree that Canada should provide economic incentives to encourage more Canadian companies to set up operations in Asia, only 39% of those aged 35-44 agree with the statement.

It is important to note that about half of the respondents from all age groups believe, that it would be bad for Canadians if Asian countries surpassed us economically. Most Canadians also believe that the low cost of labour in Asia makes it difficult for Canadians to compete, although this sentiment is more prevalent among the older demographic.

Both youth (50%) and seniors (54%) agree that improving Canada’s standing in the world should be a very important foreign policy goal for the Canadian government.

All age groups consider protecting the jobs of Canadian workers as a critical goal. Limiting climate change is also very important to Canadians of all ages, as is promoting the full participation of women and girls in societies around the world. On the other hand, for all age groups, controlling and reducing immigration is not a concern.

The findings suggest that although age is linked to opinions on various issues, the results are not simplistic. The older demographic seems more open to engagement and trade, but is wary of investments from other countries.

Like seniors, youth are optimistic about engagement with Asian countries. But unlike seniors, they perceive traditional partners, such as the US and EU, to be less important comparatively.

Canadians of all ages agree on a range of issues. There is common concern about the jobs of Canadian workers as Canada increases engagement with Asian countries. Canadians of all ages also perceive China to be vital to Canada’s prosperity. And they share common views on issues such as climate change and immigration.