The Gender Gap in Canadian Attitudes Toward Asia

Men and women have long been thought to have different views across a range of issues, but is there a gender gap between Canadian men and women’s views on Asia? Findings from the Asia Pacific Foundation of Canada’s 2016 National Opinion Poll demonstrate that while there are similarities in opinion on some issues, there are clear differences on others.

When asked if they consider Canada to be part of the Asia Pacific region, 43% of men agreed compared with just 26% of women.

The attitudes of men and women are similar toward Indonesia, Vietnam, and Australia. Both men (81%) and women (79%) rated Australia in the high range. Likewise, when it comes to China, both men and women are not particularly warm, and most respondents rated the country in the moderate (5-6) or low (1-4) range. 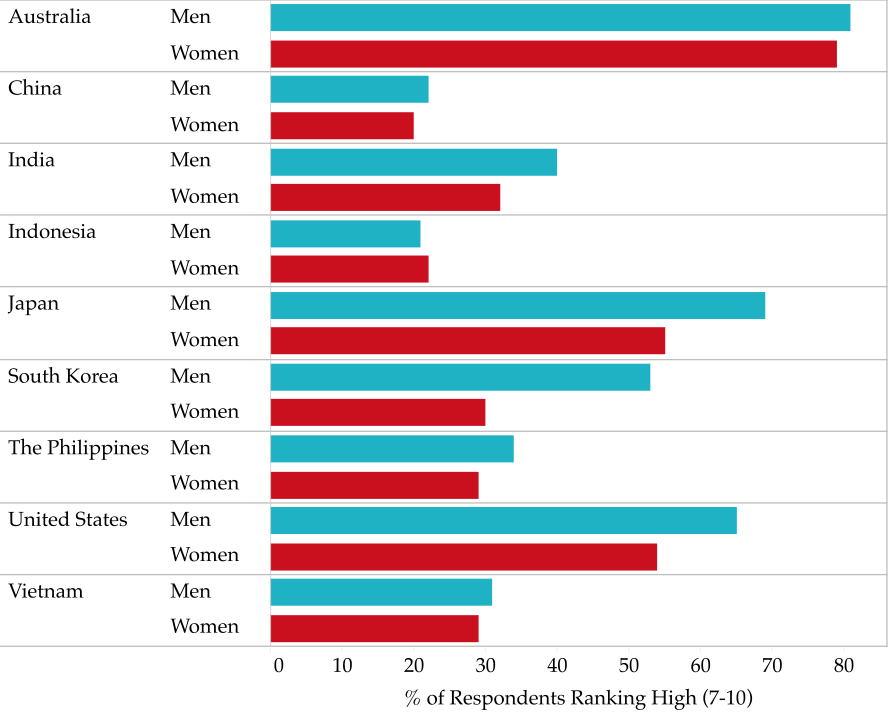 Q: On a scale of 1 to 10, please rate your feelings toward some countries or regions (with 1 being very cold or unfavourable, and 10 being very warm or favourable).

Views on Engagement and Trade

Compared with 39% of women, 49% of men believe that Canada should provide economic incentives to encourage more Canadian companies to set up operations in Asia. Similarly, more men (67%) than women (54%) feel that the Canadian government should do more to facilitate trade and investment missions for Canadian companies to visit Asian countries. More men (66%) than women (54%) also think that Asia is important to their province’s prosperity. Among men, 67% support opening provincial trade offices in Asia, compared with 55% of women. Also, 62% of men support placing more emphasis on teaching about Asia in their province’s education system, compared with 56% of women.

Almost an equal number of men (68%) and women (65%) believe that Canada should undertake friendly co-operation and engagement with China in response to the rise of its global power. Both men (71%) and women (68%) also support increasing the number of student exchanges and university agreements between their provinces and Asia. On the other hand, about half of men (52%) and women (50%) are opposed to teaching Asian languages in schools.

Both men (50%) and women (51%) are concerned about the increasing importance of Asian economies, and feel that it would be bad for Canadians if Asian countries surpassed us economically. Also, 82% of men and 84% of women agree that the low cost of labour in Asia makes it difficult for Canadians to compete. Moreover, 64% of men and 65% of women oppose giving priority to investment from Asian countries in their respective provinces. 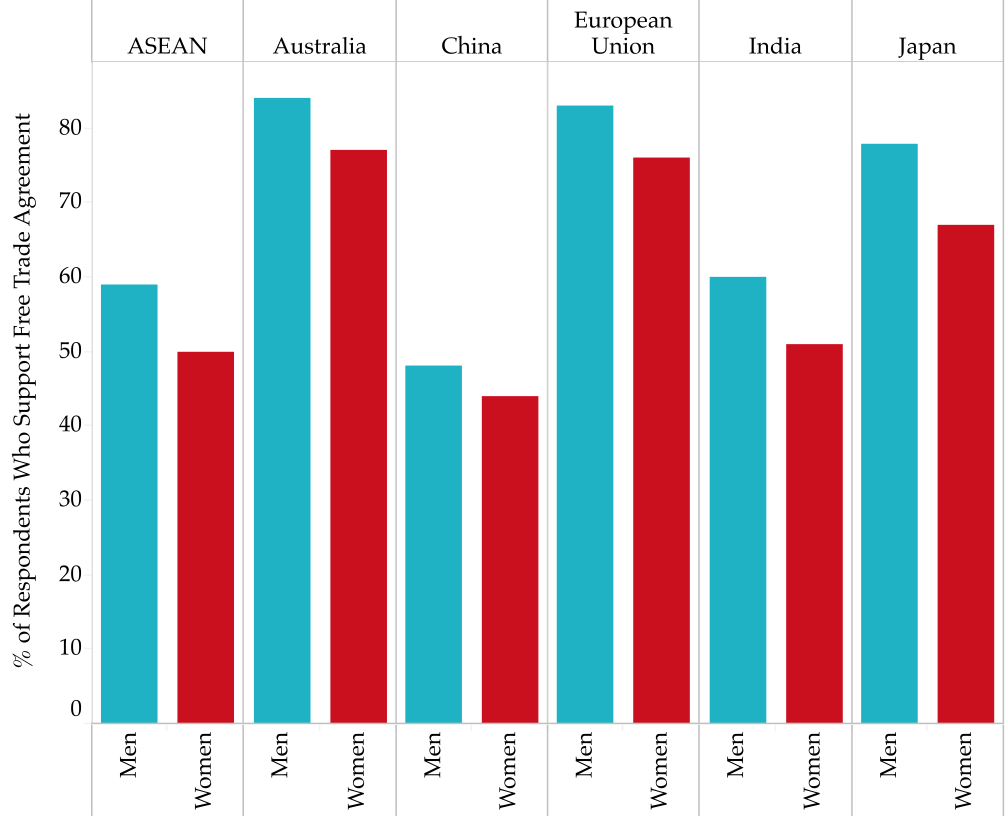 Q: Do you support or oppose the Canadian government entering into a free trade agreement with each of the following countries or regional associations?

These findings are consistent with the literature on differences in trade preferences between men and women. Studies show that men are generally more supportive of trade than women. Scholars have provided several explanations for this preference. One explanation is that women are usually considered to be less skilled than men, as indicated by the gender wage gap. Increased trade generally benefits high-skilled workers and disadvantages low-skilled workers. Another explanation is that increased trade assumes labour mobility, but it is more difficult for women to relocate for better jobs due to familial constraints, compared with men. Women are also less likely to hold managerial positions compared with men, which causes further economic disadvantage for them. Finally, it has been suggested that women are often socialized to prefer co-operation, rather than competition, which may explain why they are less likely to prefer free trade, which is inherently based on market competition.[1]

Men are also more open toward investments from Asian countries – 54% think that Canada would benefit from more Asian investment in the country, compared with only 36% of women. Likewise, when asked how they would feel if a state-owned company was trying to buy a controlling stake in a major Canadian company, men were more positive compared with women:

Q: If a state-owned company were trying to buy a controlling stake in a major Canadian company, how would you feel if the foreign government were…

Both men and women have a more favourable view of investments from privately owned foreign companies; in this case as well, men are more supportive:

Q: If a privately owned foreign company wanted to make an investment in Canada, would you favour or oppose the investment if the company were from…

Among women, 83% believe that being guaranteed an adequate standard of living, such as food, health care, and housing, is a fundamental human right, compared with 71% of men. Also, 56% of women think that combatting world hunger should be a very important foreign policy goal for the Canadian government, compared with just 41% of men. This finding is also paralleled in other research. It has been found that women are more likely than men to support “hierarchy attenuating” social policies, such as universal health care and greater aid for the poor. Broadly speaking, research suggests that women have a stronger preference for equality among social groups, while men have a greater preference for maintaining social hierarchy.[2]

About an equal number of men (49%) and women (53%) disagree with the statement that we cannot afford to stop doing business with or in Asian countries just because of human rights concerns. Similarly, 77% of men and 75% of women think that Canada should raise human rights issues in its relations with Asian countries, rather than considering them as local issues. Likewise, 65% of men and 53% of women think that promoting democracy in Asia should be a major priority for the government. These findings indicate that the Canadian government should be cognizant of human rights considerations when engaging in business and trade with Asia.

Men (52%) and women (56%) are almost equally worried about an international financial crisis. Also, 61% of men and 58% of women consider cyberattacks on Canadian computer networks to be a critical threat. Both men (54%) and women (58%) also think that combatting international terrorism should be a very important foreign policy goal for the Canadian government. Similarly, 62% of men and 60% of women feel that attaining Canadian energy independence should be a very important priority. On the other hand, few men (28%) and women (26%) see large numbers of immigrants and refugees coming into Canada as a critical threat.

Both men (68%) and women (62%) also agree that China’s growing military power is a threat to the Asia Pacific region. Further, 57% of men and 51% of women think that military conflicts in the Asia Pacific directly affect Canadian security. However, men and women are divided in their opinion about whether Canada should increase its participation in regional security initiatives in Asia – just 33% of women agree, as opposed to 49% of men. Similarly, when asked about defending our allies’ security, 40% of men consider it very important, compared with only 28% of women.

A survey from the Pew Research Center found similar results for the American demographic. Compared with men, women are less supportive of military action, and believe that diplomacy is the best way to ensure peace. Significantly more American women than men also believe that the government should prioritize education and helping the poor. Women are also more likely to favour stronger workplace safety and health, and environmental regulation than men.

There are visible differences in opinion between Canadian men and women on Asia, and their policy priorities differ across a range of issues.

Men are warmer toward most Asian countries, and are more open to furthering economic and political engagement with Asia. On the other hand, women are more passionate about social justice issues, and believe that addressing climate change, combatting world hunger, and promoting women’s rights around the world should be top policy priorities for the Canadian government.

The opinions of men and women converge when it comes to China. Though they are not particularly warm toward the country, Canadian men and women agree that the Canadian government should undertake friendly co-operation and engagement with China in response to its rising global power.