High Hopes and Hype: A Summit of the Koreas

This week the world turned its attention to Panmunjom, a small village that shares a border with both North and South Korea, and the meeting spot for the first summit between the leaders of the two Koreas in 11 years. Details of the meeting – from the possibility of a peace treaty to the opaque symbolism on the dinner menus – dominated headlines in Asia and beyond. On the morning of April 27, the entire world held its breath as Kim Jong-un finally emerged from the northern side of the DMZ, walking towards the military demarcation line to greet his counterpart, President Moon Jae-in.

Back in January, the research team at the Asia Pacific Foundation of Canada compiled its annual “10 Things to Watch” list, which consists of educated hot-takes on major happenings or trends in the Asia Pacific for the upcoming year. At that time, the tension in and around the Korean peninsula was at its height. Our team noted South Korea’s precarious geopolitical situation, predicting that Seoul would be welcoming a “wary world” for the Pyeongchang Winter Olympic Games. And, we boldly called for a ‘hamburger summit’ between President Donald Trump and North Korea’s Kim Jong-un, noting their unorthodox diplomatic modus operandi.

Yup, we called it. And you read it here first. Following the ‘Peace Olympics,’ Kim promptly agreed to meet with South Korean President Moon Jae-in for the first inter-Korean summit in more than a decade, and also expressed the desire to meet with President Trump, an invitation that was accepted immediately.

This week’s Moon-Kim meeting, which was widely regarded as a preparatory step toward the ‘hamburger summit,’ concluded with the Panmunjom Declaration in which the two leaders announced their intent to work towards a peace treaty (the two Koreas are technically still at war) and reaffirmed their commitment to denuclearization, among many other things. 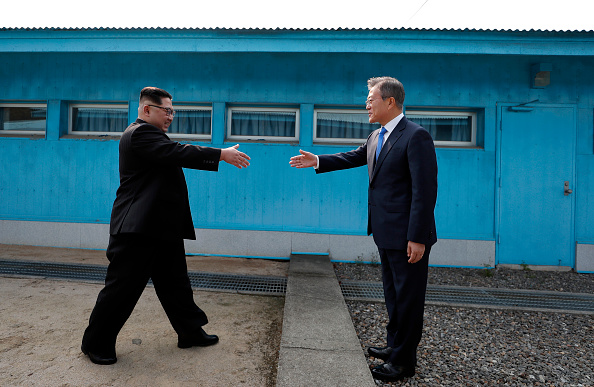 Facing each other over a bump that demarcates the militarized border, Moon and Kim shook hands, and Kim stepped over the bump, becoming the first North Korean leader to visit the South. After President Moon mused out loud whether he’d ever get to visit the North, Kim jovially offered to accompany Moon back over the bump. The surprising warmth continued throughout the day, with the two leaders taking an unplanned, unaccompanied walk for half an hour, their wives exchanging pleasantries, and President Moon and Kim sharing a brotherly hug – all of which was broadcast. Writing in the visitor’s book set up at the ‘Peace House’ in Panmunjom prior to the discussions, Kim wrote, “a new history begins now, an age of peace, at the starting point of history.”

The interaction between the two leaders, which took place in a carefully staged setting laden with symbolism, spoke to national sentiment in South Korea, where the narrative of brotherhood resonates strongly among the public, along with raised hopes of a better relationship with the North. Many South Koreans observing the summit expressed surreal, high emotions, sprinkled with hopeful expectations of reconciliation. In a Gallup poll conducted between April 24 and 26, President Moon’s approval rating was at 73 per cent, a steep increase from the low 60s at the end of January. Forty-two per cent of respondents who generally approved of Moon’s work noted “re-starting of the conversation with the North” (23 per cent), “Inter-Korean policy/national security” (10 per cent), and “diplomacy” (9 per cent) as their reasons for rating his performance favourably, which points to a desire for rapprochement with Pyongyang.

The Panmunjom Declaration that followed the summit outlined an intent to pursue re-unification driven by the two Koreas, a desire to alleviate military tension and eliminate the danger of a a localized war, and a need to establish a permanent and solid peace on the peninsula. The Declaration also reaffirmed the common goal of the “complete denuclearization” on the peninsula, the conclusion of hostile activities across the demilitarized zone (DMZ), and the facilitation of people-to-people exchanges comprising liaison offices, sending unified teams to events such as the 2018 Asian Games, and co-ordinating the reunion of separated families. 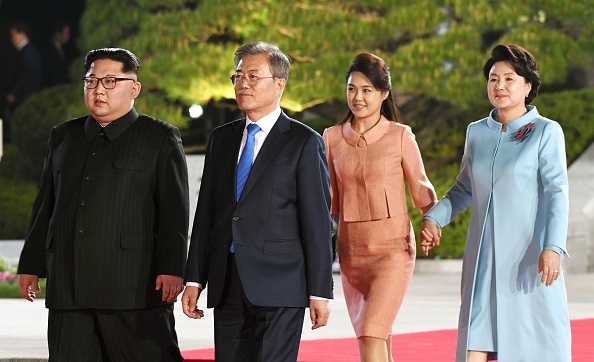 The immediate outcomes of the summit were welcomed by international stakeholders. President Trump tweeted “KOREAN WAR TO END” in all-caps, and the spokeswoman for the Chinese Foreign Ministry said “Disasters are never powerful enough to separate real brothers,” applauding the successful conclusion of the meeting. Canada’s Minister of Foreign Affairs, Chrystia Freeland, also expressed support for the outcome of the summit, stating in an official release that “Canada hopes that these talks will form a foundation for meaningful progress toward peace and stability in the region, and a more positive future for all people on the Korean peninsula.” The progress made in this week’s historic summit, marked by Kim’s unexpectedly forward gestures of reconciliation, heightens hopeful expectations about the Kim-Trump hamburger summit, which is expected to take place in May or June.