When Mahatma Gandhi challenged Indians with the statement, “If we could change ourselves, the tendencies in the world would also change,” it was a rallying call for the country to inspire change across the globe by looking first introspectively at aspects they could change within themselves. Gandhi’s message then still resonates today, as India commits itself to be a positive force in climate change. India made this commitment clear with its participation in the Paris climate agreement.

The agreement, negotiated in a 2015 summit, constituted a landmark in international efforts to mitigate and adapt to a warming world, and marked a milestone in India’s own environmental and energy policy. Building on the country’s National Action Plan on Climate Change and National Solar Mission, the government has prescribed a renewed focus on advancing renewable energy in India. However, this begs the question: with an unprecedented growing demand for electricity, can a greater investment in renewables save India from its future energy-supply woes?

The demand for energy in India is on the rise. The International Energy Association (IEA) estimates that the country’s total energy demand could rise from 775 million tonnes of oil equivalent (Mtoe) in 2013 to 1,908 Mtoe in 2040. For India to meet the nation’s increasing energy needs, its power system will have to quadruple in size, increasing at a rate of almost five per cent per year. While coal currently accounts for over 70 per cent of India’s power generation, the government is looking at using renewable energy to fill in the gap and meet Indians’ growing energy demand.

India’s renewable energy policies focus on long-term goals, including reducing its emissions intensity from 2005 levels by 33 to 35 per cent of gross domestic product by 2030, and having 40 per cent of cumulative electric power installed capacity come from non-fossil-fuel-based energy sources by 2030. To help get Indians to a place where renewable energy is a part of their daily lives, the government has set an ambitious target of increasing renewable power capacity to 175 gigawatts (GW) by 2022, focusing mainly on solar and wind power. Of the 175 GW of planned renewable power capacity, 100 GW will be generated from solar, 60 GW from wind, 10 GW from bioenergy, and 5 GW from hydro power.

These specific measures complement other, qualitative targets, such as supplying 24-hour electricity access to all of India’s population, and increasing private and foreign investment in renewable energy.

Since announcing the policies, the country has made significant steps toward realizing its renewable capacity targets. This can be seen in its progress in building its wind and solar power industries.

For wind power, data from India’s Ministry of New and Renewable Energy shows that India exceeded its 4 GW annual cumulative target in 2017, adding 5.5 GW since 2016. 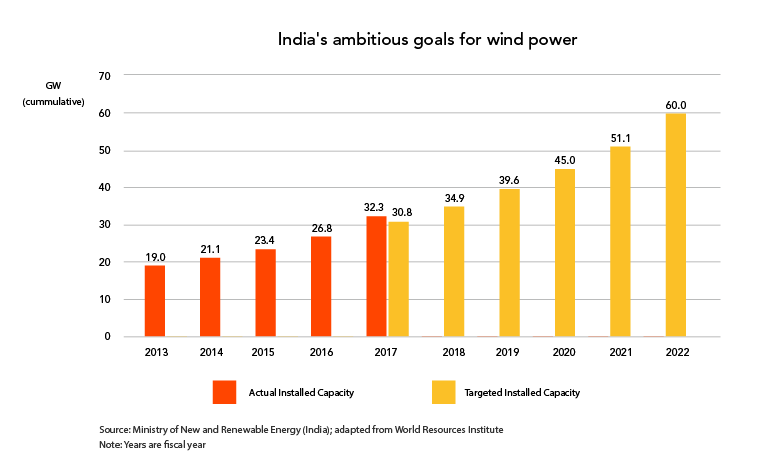 And while India has failed to meet its annual cumulative target of 17 GW in 2017 for solar power, it added 5.5 GW in 2017 to reach 12.3 GW, nearly doubling the previous year's cumulative total installed solar capacity of 6.8 GW. 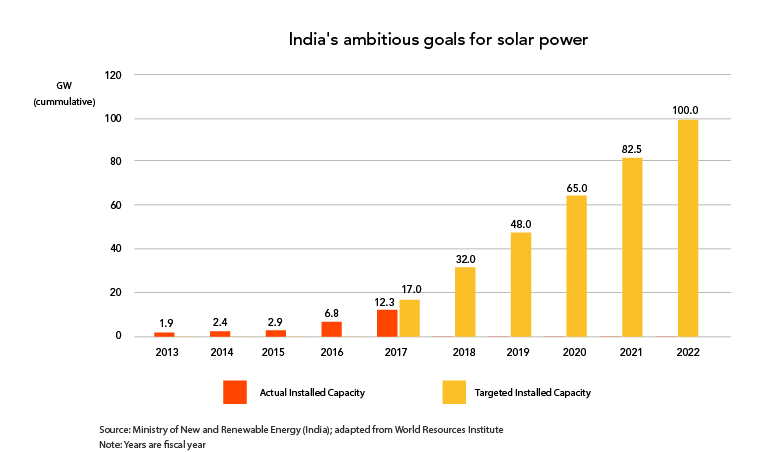 Looking forward, estimates for the potential energy drawn from wind power are hugely variable. According to the IEA, installed capacity will grow less than 50 per cent of solar, with the lack of greater wind capacity in part due to the fact that different renewable energy types are competing for similar funding and other resources.

The IEA’s estimates for India’s future performance in developing solar capacity indicate that it will most likely not meet its target of 100 GW by 2022, with installed capacity only rising to 29 GW by 2020. However, projections show that by 2040 there will be total 188 GW of installed capacity, representing a 16 per cent increase in the total share of solar power in India’s energy mix from 2015.

Given these statistics, it would be fair to say that much progress is being made in reaching India’s renewable capacity targets; nevertheless, challenges are arising that could throw the overall success of India’s renewable energy ambitions in doubt.

One of the main hurdles in building a system integrated with renewable energy sources is the limitations that the variability in supply places on the availability of dependable energy. This especially applies to building solar and wind capacity, where the unpredictability of weather conditions prevents consistent power generation.

These problems are exacerbated in India by the weakness of transmission networks and the timing of peak energy demand. For example, during the monsoon season, while high-speed winds can generate a considerable amount of power, they also cause significant damage to power lines, which in turn leads to major disruptions in transmitting newly-generated energy. Another example is in the evening, when power demand is at its highest, but when solar panels are unable to generate power. In addition, mechanisms to limit these problems, including strengthening the grid and improving demand-side management, have notable regulatory and cost hurdles. This means that making the necessary adjustments to address variability is not easy.

For solar deployment, specifically, there are a few hurdles in terms of site selection, land acquisition, and the supporting policy framework. For example, there are large inconsistencies among subnational governments being able to fulfil national targets for renewable purchase obligations because of poor enforcement by the national government. Another example is the high cost required to acquire the land for solar farms, as the national government must make deals with individual land overs to gain access to enough space to support the infrastructure for these massive farms.

A possible way to mitigate these issues is to install more rooftop solar panels. The outlook here is positive, with the IEA stating that is has the potential for very rapid growth as solar generation costs decline and access to financing options – to combat a high initial cost – becomes easier.
In terms of increasing wind-power capacity, similar challenges exist in terms of site selection, land acquisition, power transmission, and the supporting policy framework. For example, finding the right site that can produce the most amount of energy is very tricky, as ideal sites are often in remote mountainous areas. This problem is further exacerbated by the fact that these remote areas are nowhere near major power grids, making it expensive to link wind power facilities with main transmission lines.

A possible solution to these problems is for national and subnational governments to facilitate more interconnection agreements to make sure the wind power generated can reach those who need it most.

Overall, the challenges are significant. They also have an impact on India's wider energy mix, where the future increase in energy demand cannot be met with renewable energy alone. Coal will still play a large role in India's energy portfolio, with investment in new coal-fired power plants unlikely to cease in the immediate future.

India has set meaningful targets regarding renewable energy and has gone a long way toward achieving them. However, it still faces significant challenges in terms of integrating renewable energy in its energy mix due to an overwhelming increase in electricity demand to meet the needs of India's burgeoning economy.

The success or failure of India's renewable energy policies remains to be seen. But the positive outlook in the sector suggests a bright future, as investors and industry experts are paying attention to the wealth of opportunities on offer. If India can realize its renewable energy ambitions, it will be the world that needs to change to catch up. 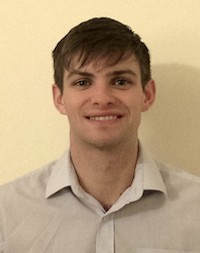 Peter O'Boyle holds an master's (Hons) degree in International Relations and Mediaeval History from the University of St. Andrews, and an master's degree in Political Science from the University of British Columbia, with a specialization in Asia Pacific international relations and political economy. Peter is a former Junior Research Fellow at the Asia Pacific Foundation of Canada.