A Student’s Perspective on Political Developments in Hong Kong

September 28th marked the anniversary of the Umbrella Movement, when students occupied the streets of Hong Kong after Beijing restricted the roster of candidates that could stand for the 2017 Chief Executive elections. Through their action, the students hoped to raise the awareness of the general public to the importance of upholding Hong Kong’s unique culture and society in the wake of  China’s National People’s Congress ruling on the electoral system. Two years later, with the electoral success of student leaders in Hong Kong’s recent September 2016 Legislative Council (LegCo) elections, the students have changed their tactics, moving the debate from the streets into the legislature.

The Aftermath of the Umbrella Movement

The Hong Kong Special Administrative Region’s current political system is divided between the pro-establishment parties that are broadly supportive of China’s policies in Hong Kong as a way to promote business and political interests, and the pan-democrats who wish to expedite the process of democratization in the city. In response to the perceived lack of political change in the aftermath of the Umbrella Movement, Hong Kong youth have created new political parties based on the ideology of localism, prioritizing local interests and ushering in a new “third force” in Hong Kong politics.

Within the last decade, several issues have driven some students to protect local interests. The slow implementation of Putonghua (Mandarin) instead of Cantonese in Hong Kong schools, the controversial proposal for a ‘Moral and National Education’ that focuses on building Chinese patriotism, and the perception that Hong Kong housing and other resources are being unequally allocated to Chinese visitors, are some of the sources of discontent expressed by certain segments of society. Localism has become a medium of expression for some Hong Kongers to express their opinion against the politics of Beijing and to preserve a unique local identity that encompasses a mixture of eastern and western values.

In the aftermath of the Umbrella Movement, the formation of new youth-based localist parties such as Youngspiration and Hong Kong Indigenous gained traction with their ideas of “self-determination,” or as they argue, that Hong Kong residents should be able to decide their own future. This marked the beginning of a student commitment to fostering institutional change through Hong Kong’s electoral system. Twice in the past, these newly founded political parties attempted to enter the political arena, but showed limited success. It was not until their third attempt during the September 2016 LegCo elections that Hong Kong’s student activists were successful in entering the political mainstream.

The first attempt of the student activists came in November 2015, when democratic elections were held for the local administrative bodies called District Councils. The Umbrella Movement protesters, dubbed as “Umbrella Soldiers”, faced challenges competing against their veteran political opponents due to their lack of experience. In the end, up to eight of the Umbrella Soldiers were elected but many hid their affiliation fearing a backlash of anti-Umbrella Movement campaigns from pro-establishment parties. District Councils, however, only act as advisory bodies on local matters, which means that their influence on the larger politics of the Special Administrative Region is minimal. 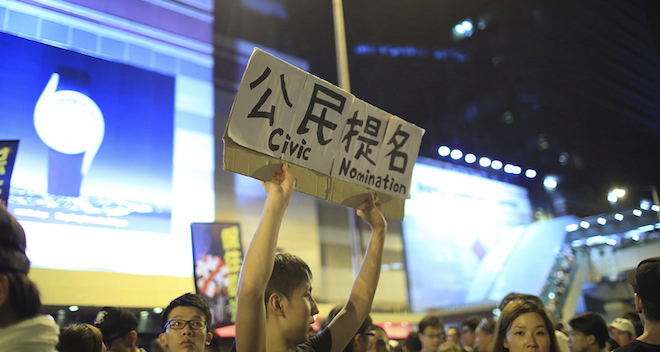 In the February 2016 by-election for a LegCo seat, Hong Kong Indigenous put forth the nomination of Edward Leung, a Hong Kong University student who wanted to stand up for local culture and Hong Kong values. Both Leung and other localist-oriented students, however, became involved with the Mong Kok Lunar New Year civil unrest which saw two gunshots fired, 130 injured, and 69 arrested. Unlike the Umbrella Movement which supported the idea of peaceful civil-disobedience, public reaction to Leung and the more radical localist students was mixed, with some wanting political change and others condemning the more militant and violent means of resistance against the Hong Kong Government. Despite the negative backlash, Leung ultimately came in third place, demonstrating a desire for change from the electorate, but not enough to earn a seat in the LegCo.

The results, however, of the 2016 September LegCo elections represents the entrance of student activists into mainstream politics. Initially, five electoral candidates, including Edward Leung, were disqualified for allegedly supporting Hong Kong independence, a direct violation of the ‘Basic Law’ that states that Hong Kong is an unalienable part of China under “one country, two systems.” Despite this, six localist and radical candidates were still elected to the LegCo, with three of the newly elected lawmakers being former Umbrella student protestors who seek to preserve the city’s unique values and institutions. Some of the victories for the students include:

The LegCo, as the main body in Hong Kong which enacts, amends and repeals laws, approves budgets and monitors the work of the government, will become an important place to monitor the future political developments of Hong Kong. This will be especially true in 2017 when the pro-Beijing dominated election committee selects Hong Kong’s next Chief Executive. Members of election committee will need to re-evaluate whether incumbent Chief Executive C.Y. Leung’s performance warrants another term or whether a more hardline candidate is needed to deal with localism in Hong Kong.

Looking Ahead: What’s Next for Hong Kong?

Although the composition of the LegCo has not changed drastically after the latest election (pro-democracy groups only gained three seats overall), the new localist and radical forces in Hong Kong politics may create more pressure on the Hong Kong Government to accelerate electoral reforms. From the case of the missing Causeway Bay booksellers, to the academic appointment of pro-Beijing Hong Kong University Chairman Arthur Li and the alleged political intimidation of LegCo election candidates by Beijing, societal pressure from certain quarters is building to address the perceived unequal relationship between Hong Kong and China. The electoral success, however, of these newly elected lawmakers marks the next step in bringing new voices to Hong Kong’s legislature. Hong Kong youth are slowly learning how to navigate their own complex political system. Now that they are no longer protesters, it will be interesting to see how these newly elected politicians balance their ideological values with political reality.