In the past decade, the scientific community has made significant strides in understanding the functioning of the brain. The rising incidence of diseases like Alzheimer's and autism coupled with developments in artificial intelligence and machine learning have served to accelerate wide-spread interest in brain science and psychology. Central to advancing knowledge is of course the ability to conduct reliable and safe human experiments. One of the barriers that psychology researchers and brain scientists frequently encounter is that they have a hard time finding volunteers who they can study or conduct experiments on. The volunteers they do find often don’t represent a diverse population, giving rise to selection biases that can seriously impact the results of their studies. Jose Barrios, the co-founder and CEO of Cognilab, has developed a platform that has the potential to address these issues by transforming the way that studies are conducted across a wide range of sectors. In essence, he has created the world’s first virtual laboratory for psychology research that can use crowdsourcing to identify volunteers for experiments. Through facilitating remote sampling, Cognilab is providing a way for companies and research institutions to draw on much larger, heterogeneous populations.

Cognilab started as a spinoff project at the University of Victoria. Jose, a Mexican born student, went to Victoria, British Columbia, to pursue his studies. He began working with children's autism at the Centre for Autism Research under the supervision of Dr. James Tanaka. It was there he met Kelsey Hannan, who would become his partner at Cognilab. It was difficult to get the children into the lab because the kids were located all across Vancouver Island. So, the team developed a technology for establishing a virtual lab. Instead of having to travel to Victoria to take tests, the children could participate online without ever leaving their homes. The system worked so well that the university started adopting it more broadly. It introduced huge cost savings in terms of both the aggregate cost per participant for running the experiments and the time investment needed to run experiments. Jose saw a golden opportunity to develop the platform further, streamlining the entire research process, from creating experiments to recruiting participants to getting results. Cognilab was born. Today, Cognilab has about 635,000 potential test participants in 190 countries that researchers can access with the click of a button. 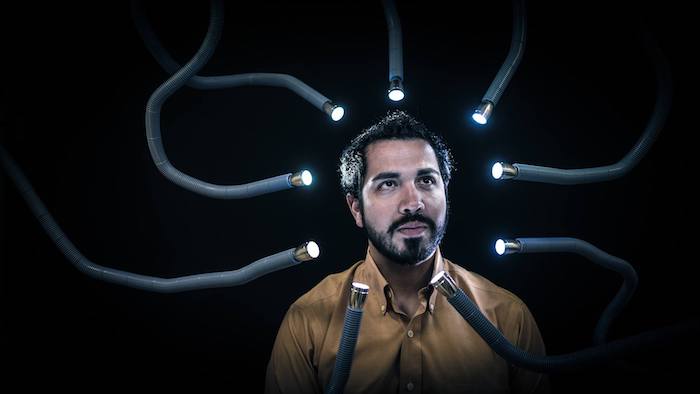 Jose Barrios, the co-founder and CEO of Cognilab

The platform, Jose explains, allows researchers to target specific groups, or put out an open-call for participants. Researchers post their experiment descriptions and specify the terms of participation (e.g. how much participants will be paid).  Participants can then sign up if they are interested. While the platform was initially developed for cognitive research, it has since expanded and can support a variety of on-line experiments. The capabilities range from basic surveys to reaction-time research.

Cognilab is able to obtain a large number of international by using a specific category of crowdsourcing called micro tasks, which operate as a marketplace. These marketplaces were initially created by large companies like Google and Amazon to outsource discrete pieces of work like picture tagging. They have since opened them up to companies like Cognilab which is able to send out experiments and offer ‘x’ amount for participating in that experiment.

One of the big advantages of this technology is that it helps “globalize research” by helping researchers get access to trial subjects worldwide with relatively low effort and cost. The technology can serve as a bridge to Asia. As Jose explains “We can actually compare how Americans perceive 'x' versus how Asians perceive 'x'. There is a very distinct difference. Now you don't have to be able to open an office in Asia in order to be able to study or conduct experiments in Asia. We are trying to democratize research and bring down the walls so that we are better able to understand different cultures. Right now, we are a bit ethnocentric in our studies, and I think that's actually a terrible thing for minorities; from medical research to a whole bunch of other issues, like marketing, we don't understand other perspectives outside of the majority perspective in the U.S. We need to open a little bit more and be able to understand other cultures, because our way; well, we can't do business our way anymore. We need to understand Confucianism as well as we understand Aristotle.”

Cognilab has been making some concrete inroads into Asia. To date Cognilab has access to about 180,000 people in India and about 30,000 participants from ASEAN countries, including Vietnam and Thailand, among others.

While China is very much on their radar, Cognilab has been much less successful in penetrating that market. The reason as Jose explains has to do with caution on the part of Chinese academic institutions and China’s Internet restrictions. He explained further: “[O]ur penetration into the market is in collaboration with academic research institutions, so universities, and specifically universities that are doing empirical studies between Asia and the U.S. Most of the interest, so far, has come from the latter. Institutions in China tend to be a little bit more conservative, and tend to be more difficult to reach. We did have a Chinese graduate student who came to UBC and started using our platform; then, when she returned back, she couldn't use it anymore because her Internet was blocked. You could do virtual private networks, and go around that, but for the typical user, who is not a computer scientist, that is actually quite difficult. For us to be able to do that it's also quite difficult; providing support and whatnot.”

In order to address this challenge, Jose believes that he will need assistance from the Canadian government. At a minimum, he thinks he would need government backing and legal assistance. But he also thinks that companies like his could benefit from the Canadian government setting up Canadian Trade Accelerators in China and across Asia. These accelerators would offer startup companies a place to sit, assistance with visas, and legal and accounting information, for a small portion of equity in the company.

While getting Canadian companies to Asia is a challenge, a prior challenge is helping startups like Jose’s set up shop in Canada. Jose also provided some useful insights into what Canada is doing well, as well as what it needs to more of in order to foster a good ecosystem for startups like his own company. His experience is instructive. Jose came in to Canada through the Start Up Visa Program. He was one of the first three successful applicants to the program. He is a Mexican born citizen, and the only reason he was able to start a business here in Canada, was because the government offered a permanent residency in exchange for him starting a company. As he explained: “If it wasn't for that, Cognilab wouldn't be here today.” At the time, he had two identical offers, one from Silicon Valley and one from HIGHLINE.vc, which used to be called Grow Lab in Vancouver. The company decided to stay in Canada, because Grow Lab offered to help Jose get permanent residence.

Making it easy to get permanent residence status for entrepreneurs or assisting with visas is key in competing against US companies that are able to pay much higher salaries than most Canadian companies says Jose. In his words, “we don't produce enough talent to be able to sustain the demand, and especially when you have the American companies picking up the very best.”

He suggests that the government should consider building on the current Start Up Visa Program. When he went through the system, a company needed to obtain $200,000 from a designated venture capitalist, $75,000 from an individual investor, or get into an accelerator program with an equity stake. Jose explained that “it is incredibly difficult” to explore the first two routes. In his words, “Startup companies say – I want to come in, but I can't get a visa to come to Canada until I get an offer from an investor, but an investor won't give me an offer until I meet with them in Canada.”

To address this impasse, Jose suggests the Canadian government could explore developing a temporary entrepreneur visa, which would allow an entrepreneur to come to Canada for a few weeks to talk to investors. Such a program could be linked to incubators and accelerators: the company could be required to come and be in temporary spaces like Launch Academy, where they could network, develop their business, and get a dry run at establishing themselves in Canada for a few months. They would then be in a better position to secure the needed investment capital for the Start Up Visa Program.

In the case of Cognilab, they were lucky. They were able to get into Launch Academy, a Vancouver incubator. The management at Launch Academy then introduced them to the accelerator HIGHLINE.vc. Jose believes that without that initial backing, HIGHLINE.vc or venture capital folks wouldn't have even taken a look at his company. As he explains, “They get thousands of requests per year. They don't have time to go through all of them. They rely on partners like Launch Academy for who they think is worth investment.” He continued, “I cannot imagine how difficult it would be for somebody in India, without any connections here, to be able to get an introduction to a top-tier venture capitalist.”

Meanwhile, at least for Cognilab, business is booming. Cognilab’s platform is being used by researchers at Harvard, McGill and MIT, and the company's recently signed-on clients include the Publicist, a New York advertising company, and the Mayo Clinic.