There has been a renewed interest over the past few years in strengthening Canada-China trade relations as part of the Canadian government’s strategy of international trade diversification. The Trudeau government, however, faces the challenge of expanding and deepening public support as it opens exploratory talks with China on a potential free trade agreement (FTA).

The national opinion poll (NOP) conducted by the Asia Pacific Foundation of Canada (APF Canada) in 2017 revealed that over half of Canadians (55%) support a Canada-China FTA, up 9 points from 2016 and up 19 points since 2014. While the majority of Canadians expressed support for an FTA with China and the percentage has grown significantly over time, we should not ignore the groups who are either opposed or undecided (see 2017 National Opinion Poll: Canadian Views on Engagement with China). Understanding the rationale behind their concern is critical for the government as it seeks to craft a coherent argument outlining why Canada should increase its trade engagement with China.

Policy-makers, scholars, and other commentators have suggested a number of factors that may affect public opinion on expanded trade with China. These include:

To date, there has been little analysis of how these concerns actually factor into Canadians’ support or opposition to an FTA with China. Our in-depth analysis of the most recent NOP in 2017 provides some insights into this question, and sheds light on the primary issues that concern the public.

In our statistical analysis, we include all of the confounding factors discussed above, and control for demographic and regional differences in order to tease out the effects of different factors on whether Canadians support, oppose, or have no opinion about an FTA with China. The main findings include:

Concerns about political/cultural differences influence attitudes towards an FTA with China, but they carry less weight than economic factors. In the survey, we asked people whether they think human rights should be the Canadian government’s top priority in its relationship with China, and whether they agree that Canada, in considering its trade relations, should not engage with a communist country with different values and cultures. Probably surprising to many, the effects of these factors are not as strong as expected. Understandably, people who believe that Canada should not expand trade with a communist country are more likely to oppose than to support an FTA with China. Such an effect, however, is much smaller than the effects of the economic factors noted above. Notably, there are no significant differences in attitudes toward an FTA with China between those who believe human rights issues should be the number one priority for Canada government, and those who do not.

Results show that concerns about rising protectionist sentiments in the West make people more supportive of an FTA with China. Such concerns have a stronger effect than do concerns about political culture differences between the two countries. People who believe that expanded trade with China would cause problems for Canada-U.S. relations are more likely to oppose than to support an FTA with China. 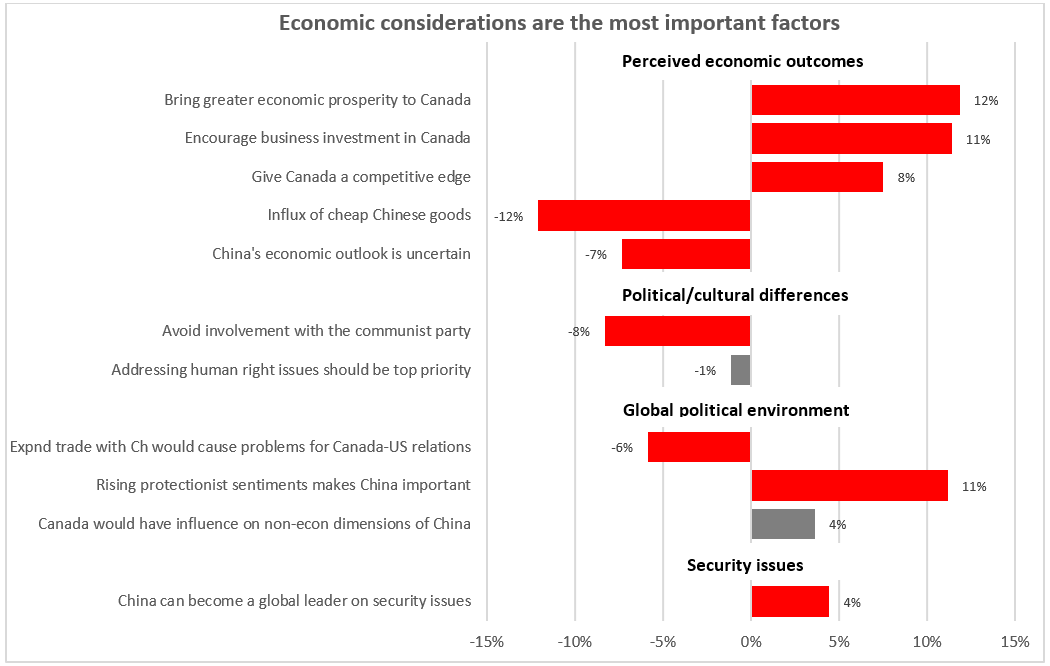 Note: The graph shows predicted differences in the probability of supporting an FTA with China comparing people who agree with each statement to those who disagree, adjusting for other factors. For instance, if a person agrees with the statement that, “Expanded trade with China would bring greater economic prosperity to Canada,” the probability of this person supporting a Canada-China FTA is 12 percentage points higher than a person who disagrees with this statement. Red bars indicate these factors have statistically significant effects and gray bars indicate non-significant factors. The positive/negative signs indicate positive or negative differences in the probability of supporting.

Canadians do not oppose an FTA with China because of an anti-trade stance.Anti-trade sentiment among working Canadians may be a concern for Ottawa, but our analysis shows that Canadians who oppose or support an FTA with China do not differ in their views towards strengthening economic relations with the EU, Japan, or India. In other words, opposition is linked specifically to China rather than to a general anti-trade stance.

Unlike those who say they are opposed to an FTA, the undecided group seems to follow a random pattern, with gender being the only significant factor associated with having no opinion. Specifically, women were much more likely to have no opinion about an FTA with China. Other factors are not statistically associated with whether or not people are undecided.

The Canadian pubic has demonstrated an increasing awareness of the importance of an FTA with China. Nonetheless, Ottawa needs to understand the mechanisms that drive the opposition or ambivalence that continues to exist.

As Canada's ambassador to China, John McCallum, has commented, it is crucial to “persuade the average Canadian or the average Canadian worker whether [a free trade agreement with China is] good for him or her.” The question is not about whether we should establish an FTA with China, but rather what kind of agreement we should pursue to secure the best interests of the Canadian public. Some implications may be drawn from our findings.

First, the main concern about a bilateral trade agreement arises from perceived negative economic outcomes. As such, the most effective approach to building public support is to craft a trade agenda that aligns with the economic interests of the general public and the long-term economic prosperity of Canada as a whole, rather than focusing on the narrow interests of some business groups. Some lessons in this respect may be learned from the China-Australia FTA (see The China-Australia Free Trade Agreement: Lessons for Canada and Toward a Canada-China FTA: 8 Points to Consider for Pursuing Free Trade with China).

Second, concerns about China’s political culture/values (especially human rights) and security issues seem to be less of a factor in shaping public hesitancy around a free trade agreement when compared to certain economic considerations. This does not mean that those concerns are not important; but the data does suggest that Canadians are most concerned about ensuring that Canadians face a level playing field when they compete with their Chinese counterparts in the market. Open discussions with China on these issues would help reassure the public and demonstrate Ottawa’s efforts to protect Canadian values and culture.

Third, growing support for an FTA with China is due in part to the strengthening anti-trade sentiment elsewhere in the Western world. The U.S. withdrawal from the Trans-Pacific Partnership (TPP) and Britain’s exit from the EU have created a favourable global environment for Canada to pursue deeper trade relations with China. The government should seize this opportunity to foster public confidence in the prospects of engaging China.

In sum, our analysis would suggest that opposition to a Canada-China FTA has softened and that the number of supporters are likely to increase if the government is able to demonstrate that they are crafting a trade agenda that effectively maximizes Canadian long-term economic interests.

Despite National Polling Results, Canadian Shouldn’t be Dismissive of Asian Investment A Difference of Opinion: Canadian Provincial Views on Asia Are Francophones and Anglophones so Different in Their Views on Asia? Read more >

Inside India: Series Introduction Canada’s Millennials are Ready to Engage with Asia Gaining a Better Understanding of Asia Pacific Investment in Canada (Hint: It Starts with Data) Read more >