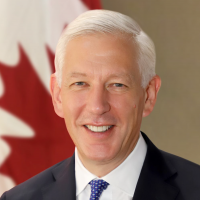 Mr. Dominic Barton is the former Canadian Ambassador to the People’s Republic of the China.

Prior to his nomination, Ambassador Barton was a Global Managing Partner at McKinsey & Company where he served from 2009 to 2018. Ambassador Barton also served as Chair of Teck Resources and as Non-Executive Director at the Singtel Group in Singapore and Investor AB in Sweden. He was also a board member of the Olayan Group, a private family-owned company.

In 2016, Ambassador Barton assumed the responsibility of Chair for the Canadian Minister of Finance’s Advisory Council on Economic Growth. He was also the Chair of the Seoul International Business Advisory Council for six years prior to his nomination. Ambassador Barton also served as a Senior Trustee of the Brookings Institution, as a member of the Singapore Economic Development Board’s International Advisory Council, and as a member of the boards of Memorial Sloan Kettering Cancer Center in New York City and the Asia Pacific Foundation of Canada. Mr. Barton is also one of the founders of Focusing Capital on the Long Term (FCLTGlobal).

In 2018, Ambassador Barton was named Chancellor of the University of Waterloo. He has also served as Co-Chair on the Max Bell School of Public Policy Advisory Board at McGill University and on the University of Toronto Psychiatry Campaign Cabinet where he engaged in volunteer support, community outreach and leadership development. In addition to these roles, Ambassador Barton served on the board of the Malala Fund, has been actively involved in the HeForShe initiative, and worked with the Mastercard Foundation to create employment in Sub-Saharan Africa.