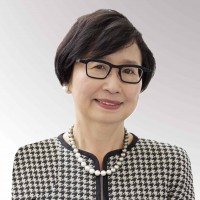 Janice Fukakusa is Chancellor at Ryerson University, a corporate director, and former Chief Administrative Officer and Chief Financial Officer of Royal Bank of Canada, from which she retired in January 2017 following a distinguished 31-year career.

Ms. Fukakusa currently serves on the boards of a number of corporate and not-for-profit organizations, including Brookfield Asset Management, Cineplex and Loblaw. She is Chair of The Princess Margaret Cancer Foundation, former inaugural Chair of Canada Infrastructure Bank and is a member of APF Canada’s Asia Business Leaders Advisory Council (ABLAC).

In 2007, Ms. Fukakusa was inducted into Canada's Most Powerful Women Hall of Fame, and in 2016 she was named one of the 25 Most Powerful Women in Banking by American Banker magazine for the fourth consecutive year. She was also selected as Canada's CFO of the Year by Financial Executives Canada, PwC and Robert Half in 2014. In 2017, she was honoured as a YWCA Woman of Distinction, and in 2018 named one of Canada’s Top 25 Women of Influence. Ms. Fukakusa was recognized for her exceptional skills in coordinating and motivating volunteers and her commitment to the advancement of philanthropy with the Association of Fundraising Professionals (GTA) 2020 Outstanding Volunteer Award.

Prior to joining RBC, Ms. Fukakusa worked at PricewaterhouseCoopers LLP, where she obtained the professional designations of Chartered Professional Accountant and Chartered Business Valuator. She was appointed Fellow of the Institute of Chartered Professional Accountants of Ontario (FCPA) in 2011. She obtained a Bachelor of Arts from University of Toronto and holds a Master of Business Administration from York University’s Schulich School of Business. In 2016, she was awarded an Honorary Doctorate of Laws from York University.