After Ferdinand Marcos died in the U.S. in 1989, the heirs of the late dictator’s wealth – his wife Imelda and his children Imee, Ferdinand Jr. (known as “Bongbong”), and Irene – were ordered to pay US$1.9 billion in damages to the victims of human rights violations carried out under Marcos's rule. But the Marcos family ignored that 1995 ruling, and the family’s assets were never fully disbursed to the victims. An additional US$353-million penalty was added in 2012, to bring the total to US$2.3 billion. It has been described as one of the “largest non-corporate monetary judgements in world jurisprudence.”

The implications of this unresolved legal dispute have not prevented Bongbong from taking a commanding lead in the polls for the presidential election on May 9. He remains popular among the public, including the younger generation, who comprise more than half of all registered voters. What explains this support for Bongbong despite his family’s ongoing legal controversies? And why are so many youths in the Philippines seemingly nostalgic for a family dynasty that made its mark on Philippines politics at a time when they were not even alive?

In the 2019 documentary, The Kingmaker, Imelda Marcos commented that “perception is real, truth is not.” The statement reveals the Marcos family’s support of – if not deliberate involvement in – constructing alternative perceptions of her famous family and the erasure of history from the collective memory. The essential idea of collective memory is that memory often extends beyond our individual minds and that private experiences of the past may be understood as a social product. The popularity of the Marcos family emerged through a complex construction and transmission of memories and narratives, including to the country’s youth. The social institutions of family, schools, mass media, religious institutions, and the government play a prominent role in Filipino youths’ perceptions of this era. 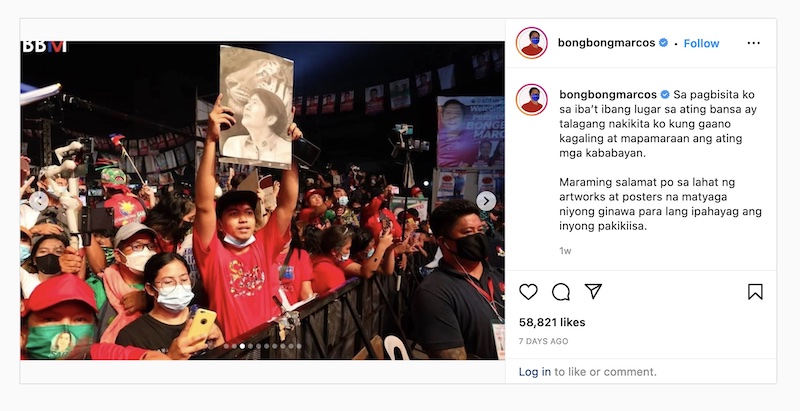 A (generational) gap in the history

According to the United Nations, the Philippines has one of the highest literacy rates in Southeast Asia. Nevertheless, one of its education system’s serious shortcomings is its approach to teaching the history of the Marcos era. International organizations such as the World Bank claim Marcos stole billions of dollars from the country’s coffers, while Amnesty International estimates that his dictatorship led to the death and imprisonment of tens of thousands of victims. However, domestic history textbooks mention little about these aspects of the past. For example, in the textbook Philippines, Our Philippines, martial law is mentioned as a way of “strengthening the powers of the president.” Other texts may include one or two sentences about the declaration of martial law but do not discuss the abuse and violence of this period. What’s more, the Marcos family itself advocates for textbook revisions that soften or even erase this history. Bongbong Marcos previously claimed that “you are teaching the children lies,” after being accused of historical revisionism and evading charges of corruption by the courts.

A recent study found that young people in the Philippines have a shaky understanding of martial law, which was marked by 14 years of authoritarian rule, gross violations of human rights, and the death of press freedoms. Although the Department of Education replaces textbooks every five years, these curriculums are widely considered inadequate in addressing this history and skewed towards positive portrayals of the Marcos dictatorship. For example, the Araling Panlipunan school curriculum for Grades 5 and 6 was recently found to contain false commentaries about the Marcos era “that were incomplete or false due to the absence of supporting economic data.” Moreover, students also reveal that what they are taught in class about martial law is contradicted by the recollections of family members and that discussion of martial law may be influenced by their teachers’ political views. These conflicting​​ accounts of history create confusion and are compounded by the fact that none of the Marcos family members has ever been truly held accountable for the family’s past crimes.

This shift in perception of the Marcos family did not happen overnight but instead became entrenched over the years. In 1986, the People Power Revolution brought together hundreds of thousands of Filipinos, including students, farmers, and religious leaders, who flocked to the Epifanio de los Santos Avenue (EDSA) in the heart of Manila, calling for an end to the dictatorship of Ferdinand Marcos. Marcos and his family were forced to flee and live in exile in Hawaii.

But it was only a brief period before the memories of the People Power Revolution were undermined from within. In 1991, President Corazon Aquino, whose husband was assassinated by the Marcos regime in 1983, allowed the former First Lady Imelda Marcos and the family to return to the Philippines to face corruption charges. Instead of facing those charges, the family immediately staged its return to politics. Bongbong reclaimed the governorship of his father’s hometown, Ilocos Norte (1992-1995), before becoming a senator in 2010. Imee followed by becoming a senator in 2019. Members of the Marcos family continue to hold various positions in government, with the grandchildren of Marcos Sr. also entering politics. During Bongbong’s run for the vice-presidency in the 2016 election, Former President Benigno Aquino III, son of Corazon and the slain Benigno Aquino II, was asked whether he believed there was a resurgence of support for the Marcoses. He replied, “No. I think the answer to that is very obvious. I don’t think so.”

However, Duterte’s presidency has permitted a revitalization of the Marcos name and has marked a turning point for the EDSA People Power narrative. On November 18, 2016, with the affirmation of the Supreme Court, Marcos’s corpse was moved to Manila and buried at the Heroes’ Cemetery with military honours. In doing this, Duterte, whose presidency has included restoring “state violence to levels unheard of” since martial law, fulfilled one of his campaign promises and helped mobilized support from Marcos loyalists. Yet this decision shocked many who lived through the oppressive regime under Marcos and triggered protests against the administration’s attempt to rewrite the dictator’s legacy. Duterte responded to his critics by insisting that Ferdinand Marcos “was a soldier. He was there to fight for his country.” While Duterte is more commonly associated with the “War on Drugs,” his regime is equally involved in trying to re-write the memory of the People Power Revolution. 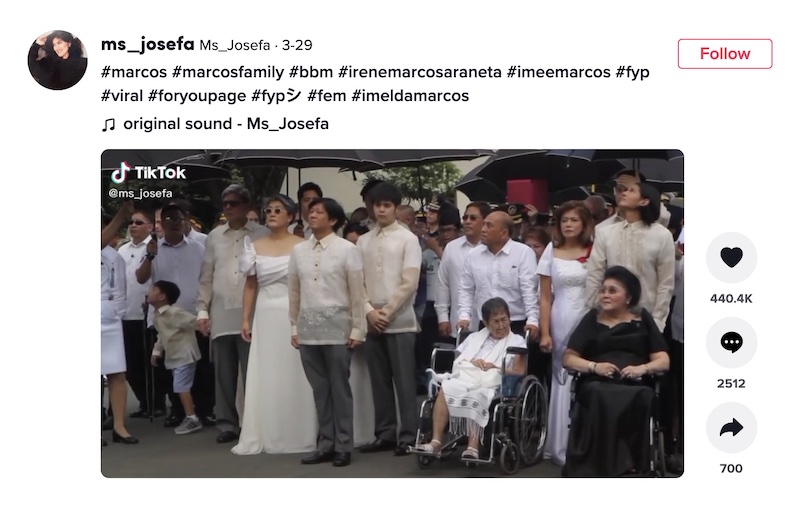 In 2017, President Duterte further distanced himself from the country’s historic democratic movement by skipping the EDSA commemorative event. Duterte then declared September 11, the hundredth anniversary of Marcos Sr.’s birth, as a special non-working holiday in Ilocos Norte. In addition to Duterte’s claims about Marcos Jr. being an ideal successor, Marcos’s legacy is also celebrated at three museums in his hometown, where highly favourable displays honour his leadership. Even before his burial, museums on Marcos’s life continued to distort history with larger-than-life portrayals of the wealthy Marcos lifestyle. Although Duterte has also occasionally criticized Bongbong Marcos during the election period, his administration has also contributed to the entrenchment of revisionist narratives regarding the Marcos legacy.

In the absence of a nuanced and more complete understanding of Marcos-era history among the country’s youth, this enduring ‘myth-making project’ has created a sense of nostalgia for this authoritarian period amongst the next generation. A 2021 survey of more than 30,000 youth by the Ateneo School of Government shows that supporters of President Rodrigo Duterte had a "lower capacity" to distinguish accurate from misleading information. Bongbong Marcos is running on populist rhetoric like that embraced by Duterte and, like Duterte’s supporters did in 2016, is weaponizing social media and manipulating the digital public sphere.

In the run-up to the May 9 elections, fake news and misleading claims have swamped Facebook, YouTube, TikTok, and Twitter, bombarding Filipinos with misinformation on platforms where they are among the world's most active users. The celebrity culture, fandom, and media attention that the family benefits from have translated into Bongbong’s popularity. Examples of such curated disinformation campaigns include montages of Marcos-era infrastructure projects depicting a golden time. These images have gone viral across social media platforms. Some even portray the martial law era as a time of peace. This fabrication of history is further legitimized through Bongbong’s astounding claim, "If my father was allowed to pursue his plans, I believe that we would be like Singapore now."

The Filipina journalist and Nobel Laureate Maria Ressa encapsulated the disinformation phenomenon as a strategy of “death by a thousand cuts,” whereby social media chips away at facts through bots and fake accounts that manipulate people and peddle an alternative reality based on half-truths. Misinformation may be a significant factor in this election, but it comes not just from social media but also from the enduring support given to the Marcoses by former and current presidents, the educational system, museums, and others who have had a hand in upholding their family legacy. 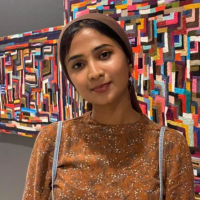 Saima Islam is pursuing a Master’s degree in Political Science from the University of British Columbia. She received a Bachelor of Arts (Honours) degree from Monash University where she double-majored in International Relations and Communications with a minor in Gender Studies. Her research interests include environmental governance, international organizations, and labour issues. Outside of research, she enjoys painting, literature, gardening, and exploring different cuisines.