The G7’s B3W Infrastructure Initiative, a Rival to China’s BRI

Earlier this month, the leaders of the G7 countries met in England to discuss some of the world’s most pressing issues, from COVID-19 vaccination campaigns to climate change. For the first time in two years, the leaders met in person, attending receptions, engaging in bilateral meetings, and dining on locally caught roasted turbot. In other words, as US President Joe Biden tweeted, diplomacy is back – and it seems to be back with a bang.

At this year’s gathering, the G7 leaders seemed to be making up for lost time – not only for last year’s missed summit but also for the years of the Trump administration when the G7 meetings were tense and, at times, steeped in conflict. This year’s meeting produced several important outcomes, from a historic 15 per cent tax on multinational corporations to a commitment of one billion COVID-19 vaccine doses for developing countries. Perhaps most significantly, the leaders announced a new infrastructure program, ‘Build Back Better World’ (B3W), to counter China’s Belt and Road Initiative (BRI).

Indeed, a key focus of this year’s summit seemed to be China. The B3W announcement occurred amidst a summit where G7 leaders called out China for human rights abuses against the Uyghur Muslims in Xinjiang, its treatment of Hong Kong’s pro-democracy activists and protesters, and its lack of transparency over the origins of the COVID-19 pandemic. As the name indicates, Build Back Better World is the G7’s attempt to add financial clout to its statements on values and human rights. From a values perspective, the B3W defines itself in stark opposition to the BRI. It aims to be everything that critics say the BRI is not: Green, clean, transparent, and supportive of local communities.

What is China’s BRI?

The Belt and Road initiative, as it is now known, was launched in 2013 with the goal (according to the Chinese government) of creating “regional connectivity,” “economic integration,” and addressing the vast and growing infrastructure funding gap facing many developing countries. The OECD has stated that filling the world’s infrastructure gap would require US$95 trillion from 2016 to 2030 (about US$6.3 trillion per year). Asia alone, according to the Asian Development Bank, needs US$26 trillion by 2030 to fill its infrastructure gap.

The BRI is one of the largest infrastructure funding projects the world has seen. The initiative involves investing in infrastructure across almost 70 countries. Since the BRI’s launch in 2013, it is estimated that China has supported over 2,600 projects worth US$4.2 trillion.

The initiative largely comprises two main networks, one land and one sea: The Silk Road Economic Belt (the land network, composed of roads and railways across Asia and Europe) and the 21st Century Maritime Silk Road (the sea network, largely consisting of port developments along the Indian Ocean). It also extends further than the marine and land corridors – it involves building skyscrapers, airports, and energy pipelines. Chinese President Xi Jinping, at the Belt and Road Forum in 2017, has also stated that it involves air and cyberspace connectivity. In addition to infrastructure, the initiative also involves building 50 special economic zones modelled after the Shenzhen Special Economic Zone. 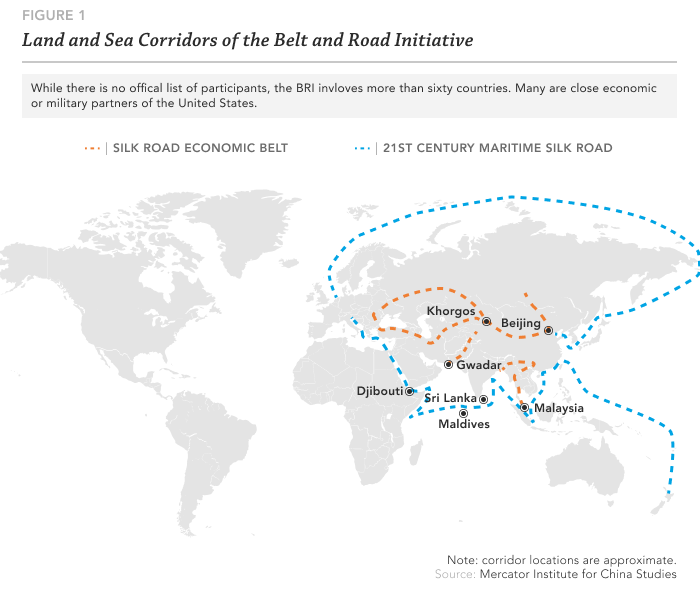 However, the BRI has not gone without criticism – in fact, quite the opposite. The initiative has been harshly critiqued by many countries, especially the United States, which consider the initiative akin to economic imperialism.

According to critics, the BRI gives China too much power and influence over the countries it helps financially. Many countries involved in the initiative have had to undertake large amounts of debt to China to fund the infrastructure updates, because the BRI uses loans instead of the more traditional aid grant. The BRI has, in fact, been labelled by many as “debt-trap diplomacy,” defined as a policy where countries agree to unsustainable loans to pursue these infrastructure projects, and then when the country experiences financial difficulty, China can extend its strategic influence and powers.

Critics point to the case of Sri Lanka’s Hambantota port as a key example of this – Sri Lanka was not able to repay China for the construction on the port, and as a result, in 2017, Sri Lanka granted China a 99-year concession on the port, and China Merchant Port Holdings acquired 70 per cent of the port’s operating company.

Other analysts argue against the accusation of debt diplomacy and say that while the Hambantota port is a cautionary tale, asset seizures under the BRI are generally rare. Despite controversies over whether the Belt and Road Initiative can be considered debt diplomacy, most analysts agree that the excessive debt burdens are concerning. The Council on Foreign Relations’ Belt and Road Tracker demonstrates that debt to China has increased significantly since 2013. For example, Cambodia’s debt to China is equivalent to approximately 22.4 per cent of Cambodia’s total GDP.

Some are also concerned about this initiative allowing China to extend its military presence – they point to China’s recent establishment of a military base in Djibouti as evidence. Overall, it is clear that the BRI’s ambitions are both economic and geopolitical – the question becomes whether the B3W’s goals are similar. 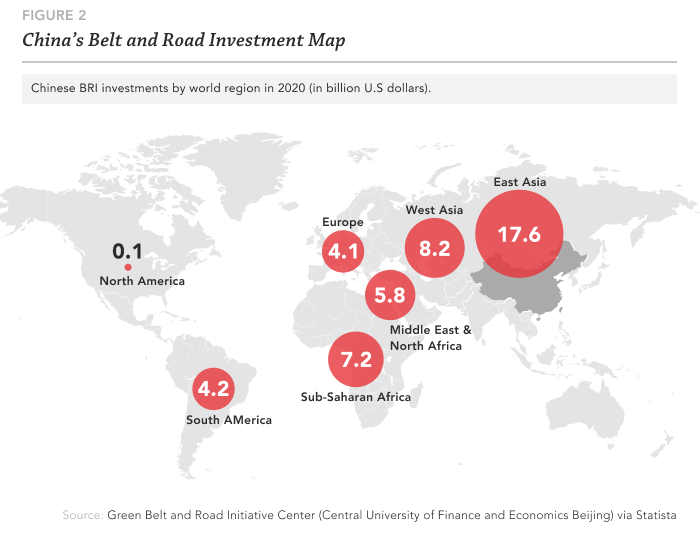 The B3W is described as a global “values-driven, high-standard and transparent infrastructure partnership led by major democracies to help narrow the C$50+ trillion infrastructure need in the development world.” While the B3W initiative is multilateral, with planned contributions by all members, it is led by the United States.

Officials from the Biden administration said the B3W was created as a “positive, alternative vision for the world” that “reflects our values, our standards, and our way of doing business.” The G7 leaders will “coordinate in mobilizing private-sector capital . . . with catalytic investments from our respective development finance institutions.” The four areas of focus are gender equity and equality, climate, health and health security, and digital technology.

According to the United States, the initiative will “collectively catalyze hundreds of billions of dollars of infrastructure investment for low- and middle-income countries in the coming years,” but that is the extent of the details on budget or timeline that have been released. This means that despite the announcement of a plan, its execution remains vague.

The lack of details has led to skepticism from many on whether the initiative will ever come to fruition. A representative from the Indonesian ministry stated, “We welcome the B3W initiative, but of course we hope this time they put their money where their mouth is.”

The absence of a clear definition of what the initiative entails poses other problems. Many have stated that a key issue with the Belt and Road Initiative is its lack of transparency, boundaries, and detailed information, as it is not always clear what is and is not part of the BRI. Analysts question how the B3W is different from the BRI in its level of information publicly available at this stage and whether (and how) that will change considering the B3W’s commitment to transparency.

Many are also doubtful of the project’s potential influence. While some countries are eager to get away from dependence on China, others are more likely to keep to their allegiances. An official from the Bangladeshi foreign ministry, for example, stated that Dhaka “remains committed to its belt and road partnerships.”

Further, some analysts speculate that the mention of private-sector capital in the briefing implies that the project, much like the BRI, will be based on loans and profitability. This begs the question of whether the project will be all that different from the BRI – and whether it will engender the same problems of debt for countries as seen within the BRI.

Other critics argue that instead of attempting to create a rival program, the G7 leaders could have committed to working with China, as combined forces (and funding) would have a greater impact on reducing the world’s infrastructure needs. If the G7 leaders had posed the initiative less as a counter to China and more as an infrastructure funding plan like the BRI, it could have been an opportunity for the BRI to sign on to some of the best practices developed in the B3W – and potentially engage in co-investments that adopted the B3W values of transparency, gender equality, and sustainability. In other words, the B3W could have played a role in solving some of the most salient issues with the BRI.

There is even controversy amongst the G7 members themselves about this initiative. Canada and the United Kingdom are in support of this initiative. However, Germany, Italy, France, and Japan seem to be more hesitant of the plan, most likely due to their economies’ reliance on China for trade. After the G7 summit, French President Emmanuel Macron stated that he wished to “avoid confrontation” with China. German Chancellor Angela Merkel seemed the most resistant of the B3W. She said that she did not want to frame the G7’s efforts as “anti-Chinese” and that “it is not as if the G7 states aren’t already a very big investor in the world.”

There has been a large amount of pushback towards China’s Belt and Road Initiative in recent years due to its opaqueness and creation of crippling debt for many developing countries. There certainly is an opportunity for an alternative program, but the B3W needs to ensure that it is not recreating the problems for which the BRI has been critiqued.

There are many factors to consider when looking at the B3W’s potential success: 1) whether the loan conditions are better than the BRI’s; 2) how the G7 leaders will avoid causing the same problems as the BRI, especially debt for developing countries; 3) how China reacts and whether it changes any aspects of the BRI; and, 4) whether countries will choose to remain with their BRI commitments, switch to the B3W, or take advantage of both initiatives.

Ultimately, there is such a significant infrastructure gap that the two initiatives will likely not be in direct competition – there is more than enough room (and funding need) for both. However, whether the G7 leaders (particularly the United States) and China use the BRI and the B3W as a proxy for a “values war” on sovereign investment will certainly be something to keep an eye on.