Investment Monitor Update: Investment Trends Between Canada and Asia in the First Half of 2021

The COVID-19 pandemic has caused global economic turmoil, with global GDP declining by 4.3 per cent in 2020. Foreign direct investment (FDI) flows were hit particularly hard – the United Nations Conference on Trade and Development (UNCTAD) reports that FDI flows decreased by 35 per cent in 2020, from US$1.5 trillion in 2019 to US$1 trillion.

The outlook for 2021 seems slightly better – UNCTAD’s World Investment Report 2021 predicts that FDI flows will increase by approximately 10 to 15 per cent in 2021. This of course begs the questions, what does the FDI recovery look like so far? Which sectors are resilient, which economies are receiving investment, and which companies are leading in investments?

Investment from Asia into Canada below 2020, but slowly increasing

The largest inbound investment in 2021 to date is from a large deal in the Media sector that accounted for C$754M, or 42 per cent of all inbound deal-flow from the Asia Pacific. This deal occurred in May when South Korean company Naver Corp. acquired Toronto’s Wattpad for C$754M. The second and third most important sectors for inbound investment in the first half of 2021 were Software and Computer Services with C$452M in investment (25 per cent of all investment), and Real Estate Investment & Services at C$242M (13 per cent of all investment). So far, South Korea has been the largest investor in Canada with C$855M invested in total (largely due to the Naver Corp deal), followed by India with C$429M, and then China with C$250M. 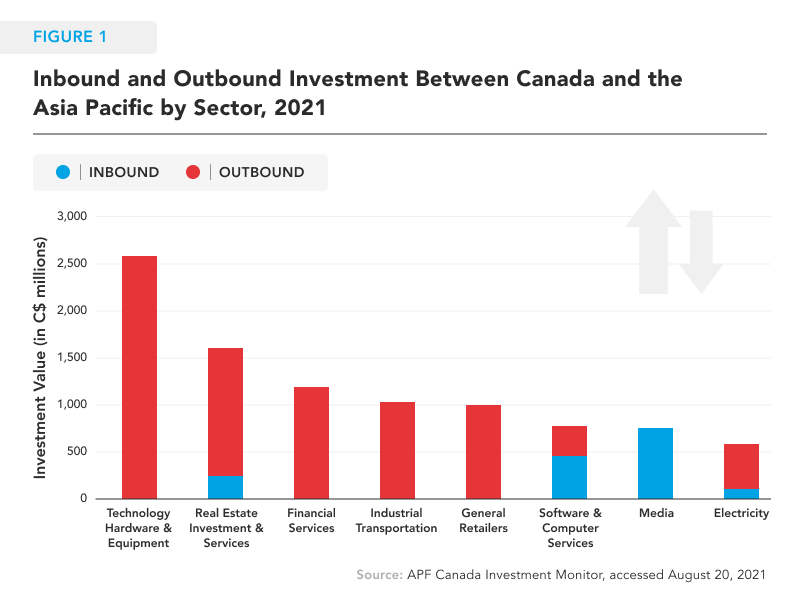 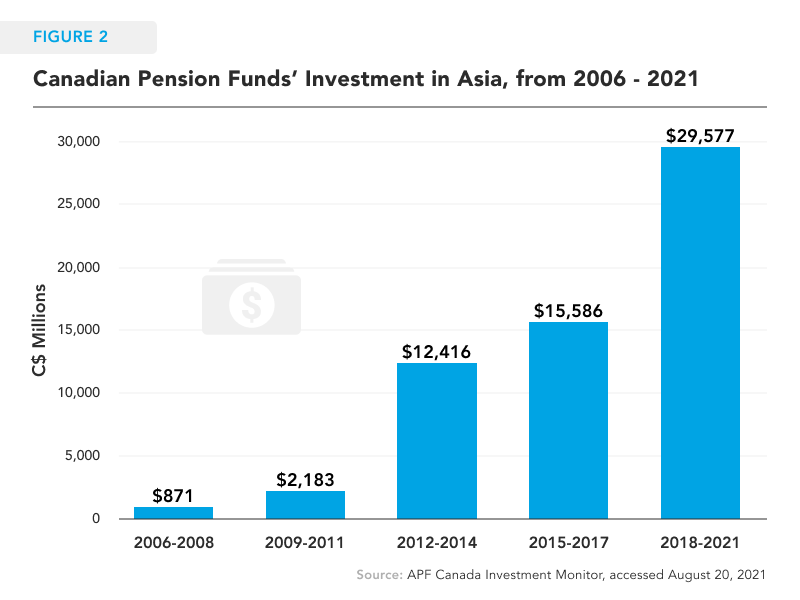 The Canada Pension Plan Investment Board (CPPIB) has been especially active in Asia. So far in 2021, according to the Investment Monitor, CPPIB has invested C$5.4B into the Asia Pacific region – accounting for 64 per cent of all Canadian outbound investment in the first half of this year. CPPIB’s investment in the region has certainly grown over the years, from C$808M between 2006-2008, to C$14.7B from 2018-2021. Out of all Asia Pacific countries, the pension fund has invested the most in Australia, with C$11.B invested, followed by China, with C$5.6B invested. 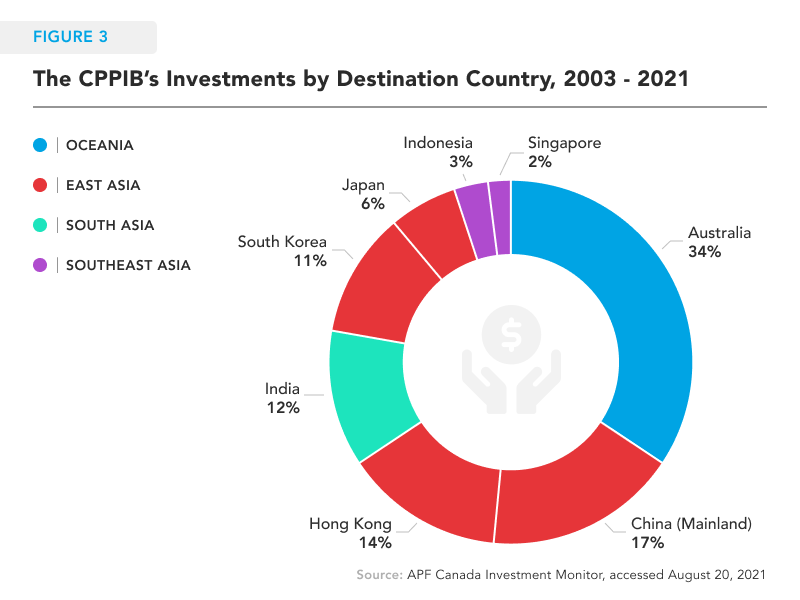 This share is likely to continue to grow in the coming years. The fund has established more than 60 partnerships in Asia with public and private entities in sectors such as real estate, infrastructure, and credit, and has made clear that these partnerships will continue to be strengthened. CPPIB’s Private Equity Asia team, which focuses on private equity investments in the Asia Pacific, has grown from almost zero to US$11B in exposure. These moves imply that the Asia Pacific region is an important – and ever growing – priority for CPPIB.

As of September 2020, China alone made up 12 per cent of CPPIB’s total investments abroad – and the CPPIB stated in a parliamentary committee meeting in 2019 that it planned to increase that number to 25 per cent by 2050. CPPIB’s investments in China have recently been critiqued, considering the current geopolitical tensions between Canada and China. However, CPPIB has continued to defend its investments in China, stating that the country is important to the diversification of the CPPIB’s portfolio, and that there are opportunities for significant returns.

Despite CPPIB defending its investments in China, the fund might be beginning to shift its strategy. Specifically, India has recently become an emerging priority for CPPIB. In fact, CPPIB’s most recent investment in India was in July 2021, when the fund invested C$1B into India’s Flipkart Group, an e-commerce retailer. Some analysts speculate that this investment is indicative of the beginning of a turning point for CPPIB’s investment strategy – one that prioritizes India over China. In an interview with CNBC, Suyi Kim, the Asia Pacific head of CPPIB, stated that CPPIB expects “to invest up to one-third of the Fund in emerging markets by 2025 and India is a key component of that.”

Trends to track as the year plays out

2021 is certainly shaping up to be an active year for FDI between Canada and Asia. As the year progresses, we will be able to better evaluate whether the UNCTAD’s World Investment Report 2021’s prediction that FDI flows will fare better in 2021 is accurate or overly optimistic. So far, it appears that the prediction might hold true for Canadian outbound investments. Only time – and the Investment Monitor – will tell if the prediction will also hold for inbound investments from the Asia Pacific.