How Vietnam is Winning its War Against COVID-19

As of April 6, Vietnam, a country of 95.5 million people, reported 245 confirmed cases of COVID-19, 95 recovered cases, and zero fatalities. Vietnam is one of the very few countries that has reportedly suffered no deaths due to the COVID-19 pandemic. While most countries around the world took a wait-and-see approach, Vietnam reacted quickly to the outbreak in Wuhan. Due to its close proximity to and deep economic links with China, in late December Vietnam’s central government began closely monitoring how the situation was evolving in Hubei Province. An emergency meeting was organized on January 15 with high-level officials from the Ministry of Health, the World Health Organization (WHO) and the U.S. Centers for Disease Control and Prevention (CDC) to discuss measures to combat the coronavirus in Vietnam. When the first case of the virus was discovered in Vietnam on January 23, the country was prepared.

Vietnam is one of the very few countries that has reportedly suffered no deaths due to the COVID-19 pandemic.

Following that first emergency meeting in January, the new Steering Committee for COVID-19 Control and Prevention issued a Response Plan to contain the virus, which was promptly implemented by provincial departments of health. As part of the Plan, schools were suspended after the Lunar New Year holidays (on January 16) as a precautionary measure, even though no cases had been reported at that time. To further the country’s containment efforts, the Plan urged Vietnam’s Ministry of Health to quickly release guidelines on control and prevention of the virus and called for an all-of-country mobilization under the direction of the central government, including the entire political system, public security forces, the army, and the general population. By February 26, Vietnamese health authorities had managed to keep the number of infections low: 16 cases, which were all treated and discharged from hospitals.

Much has been made of the successful containment efforts of South Korea, Singapore, and Taiwan, but very little has been said of Vietnam’s response to the pandemic. Unlike South Korea, Vietnam initially had only limited testing capacity and carried out about 15,000 tests by March 30, a much lower number than the 395,194 tests conducted in South Korea by the same date. With lessons learned from successfully battling the SARS epidemic in 2003, Vietnam instituted two decisive measures in containing the spread of COVID-19: Aggressive contact tracing and strict monitoring of the quarantining of suspected infections. Vietnam believes these measures will assist it in its goal of limiting its infected cases to less than 1,000.

According to WHO, a contact-tracing process comprises three steps: Contact identification, contact listing, and contact follow-up. Vietnam has successfully conducted tracing via the quick identification of infectious contacts based on the Ministry of Health’s classifications of infected, suspected, and exposed cases of COVID-19 and the rapid mobilization of health professionals, public security personnel, the military, and civil servants to implement the tracing. For example, in the case of Patient 91 identified on March 19, the mobilization included 300 public personnel who participated in the contact tracing campaign. Businesses visited by the patient were isolated and people who had been in contact with him were tracked down via surveillance camera footage and then taken into quarantine facilities. The whole process took less than two days and had a definite effect on minimizing the spread of the virus from Patient 91.

Whole neighbourhoods where an infected patient is identified are isolated and disinfected.

The first case of mass quarantine in Vietnam took place on February 12 in Son Loi commune, Vinh Phuc Province, where five infected cases were discovered. The commune, home to a large number of Vietnamese workers who had returned home from Wuhan, was isolated for 20 days. On March 7, Vietnam intensified its containment measures at its airports by mandating medical declarations for all arriving passengers. Further quarantines followed. 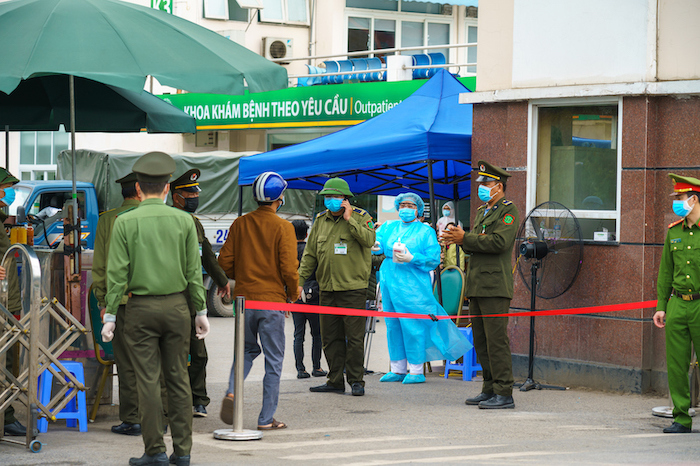 The first form of quarantine under Vietnam’s COVID-19 measures is home confinement, in which whole neighbourhoods where an infected patient is identified are isolated and disinfected. The second form, applied to those who arrive in Vietnam from virus-hit countries, is concentrated quarantine in publicly-managed facilities, such as universities and hospitals or military-run camps. To ensure transparency and accountability, citizens can easily access information on and the locations of all quarantine camps on Zalo – the most popular social platform in Vietnam. The latest high-profile case of mass quarantine is Bach Mai Hospital in Hanoi – one of the largest hospitals in Vietnam. The quarantine was imposed beginning on March 28, after more than 30 infected cases were identified at the hospital. A nation-wide campaign has since been carried out to trace more than 40,000 visitors to the hospital between March 10 and 27.

Technology has played a key role in the monitoring of suspected and confirmed infected patients in Vietnam. The Ministry of Health has worked with tech-firm partners to develop an online reporting system in which suspected and confirmed cases of COVID-19, as well as people in close contact, are entered into a database available in real time to the government in Hanoi. In addition, a mobile app, NCOVI, has been introduced by the Ministry of Information and Communications (MIC) to allow citizens to proactively declare their health status on a daily basis. Hanoi has also launched a mobile app, SmartCity, to track infected, quarantined, and recovered cases. Patients are required to install the app in their phones, which raises an alarm and sends notifications to the heads of residential districts if they move 20-to-30 metres away from quarantine areas, or houses for self-isolated cases.

Citizens have been co-operative with the government, largely supporting its use of tracking apps.

Accurate and real-time data collected through these two apps has proven very useful to the government in shaping its response to the outbreak. Nevertheless, the use of technology has elicited concerns over data privacy and mass surveillance. The identities of infected patients have been leaked on social media platforms, highlighting Vietnam’s poor regulatory framework around the protection of personal data.

Although the government of Vietnam has failed to protect the privacy of infected patients, citizens have been co-operative with the government, largely supporting its use of tracking apps, as well as state-funded campaigns to encourage hand-washing and hygiene. According to a recent survey, 62 per cent of Vietnamese say that they are satisfied with the level of response from the government in fighting COVID-19, with 17 per cent of respondents stating that their government’s response was “too little.”

Most concerns over privacy issues and mass surveillance in Vietnam have originated with international observers. This suggests a different view on privacy and personal data protection in Vietnam, which stands in stark contrast to Canada, where data protection is a significant concern. With the number of infected cases in Canada steadily rising, the Government of Canada is under pressure to do more to trace the contacts of confirmed patients.

A number of proposals from companies in Ontario and Quebec for using apps that would utilize Bluetooth or GPS data to trace contacts have been submitted to provincial and federal levels of government. Canada’s federal Personal Information Protection and Electronic Documents Act and Privacy Act allow personal information to be collected, used, or disclosed for specific reasons in the context of a public health crisis. But if there were large-scale data leaks as tracing apps were rolled out in Canada, the government could risk losing public trust in these measures.

Vietnam’s approach to contact tracing and its experience with data breaches are instructive for Canadian decision-makers who need to take great caution in preventing the public disclosure of Canadians’ identities during the pandemic. South Korea, Singapore, and Taiwan have all been successful in limiting the outbreak of COVID-19, and there are many lessons to be gleaned. But Vietnam’s unique experience, especially how it relied on technology to deal with its initial outbreak, can also prove insightful to Canadians.

Tracy Ly is a Post-Graduate Research Scholar at the Asia Pacific Foundation of Canada. She earned a Master's Degree in Public Policy and Global Affairs from the University of British Columbia, specializing in innovation and entrepreneurship policy in Southeast Asia.

Vietnam in the Post-COVID Era: Realizing a ‘Digital Country’ Pushed to the Margin: Vulnerable Groups in the Asia Pacific During COVID-19 ASEAN Struggles to be Effective in its COVID-19 Response Read more >