Even as the second wave of COVID-19 rages through the country, the 2021 Vidhan Sabha or the State Assembly Election results for four Indian States – Assam, Kerala, Tamil Nadu, and West Bengal – and the Union Territory of Puducherry were announced on May 2.

Among the five State Assembly Elections, Prime Minister Narendra Modi’s Bharatiya Janata Party (BJP) managed to retain power in Assam and claimed Puducherry. Both the southern states of Tamil Nadu and Kerala proved tough opposition for the BJP, and the national party managed to gain only four seats in Tamil Nadu (1.7%) and none in Kerala. But it was West Bengal where, although the BJP lost, it managed to carve out a significant space and take over the role of the main opposition by ousting the Left Front-Congress Alliance, and taking control of 26 per cent of the State Assembly. With a combined population of almost 240 million, the election campaigns in each of these states were marked by identity politics and divisive rhetoric as the BJP attempted to make inroads beyond its traditional stronghold in the heartland of India.

The 2021 State Assembly Election results suggest Narendra Modi’s BJP may finally face some resistance in the 2024 General Elections, but three years is a long time for the tide to turn either way. Despite the losses in West Bengal, Tamil Nadu, and Kerala, what is evident is BJP’s growing support base in each state where they have historically lacked any footing. Over the past decade, the BJP’s votes share in Kerala (11.3% in 2021) increased by 88 per cent, in Tamil Nadu (2.62% in 2021) by 19 per cent, and in West Bengal (38.1%) by 829 per cent. This could bolster the saffron party’s already firm standing in the lead-up to the next General Election in 2024 and gives a growing platform to their nationalist agenda. 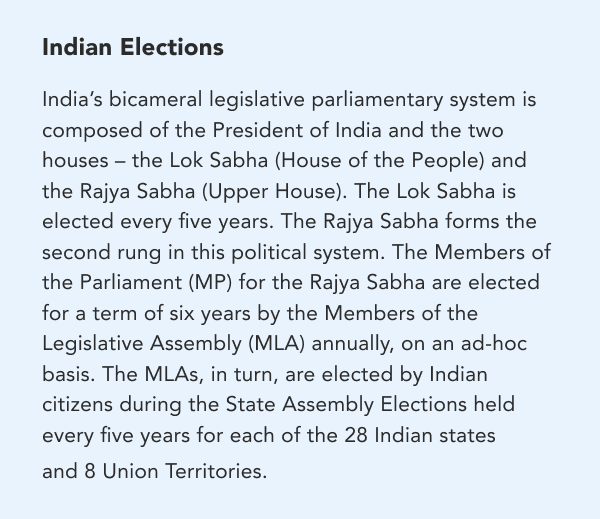 The significance of India’s state elections

India’s State Assembly elections act as a litmus test for the General Elections (Lok Sabha), as political parties can assess their popularity and acceptance within each state. Every year, a set of states and union territories undergo the election process to elect their members of the legislative assembly (MLAs), who form the state government. In India’s multi-party democracy system, unlike the Canadian electoral system, the larger national parties in India, such as the BJP and the Indian National Congress (INC), also have state units representing them at the state/union territory level.

This election season, all eyes were on West Bengal as the ruling All India Trinamool Congress (AITC) led by the only female chief minister, Mamata Banerjee, faced stiff competition from the BJP. In 2011, Banerjee set a milestone when the AITC toppled the 34-year rule of the Left Front Alliance, led by the Communist Party of India (Marxist), by riding on the back of the anti-land acquisition movements of the 2000s in Singur and Nandigram. The AITC has faced little opposition over the past decade. But the 2021 State Assembly Elections mark a possible turning point for Bengal, which prides itself on intellect, diversity, tolerance, and multiculturalism.

With 30 per cent of the voting population identifying as Muslims, one of the largest in the country, the state’s electorate witnessed political rhetoric framed to promote religious divides and emphasize the Bengali identity. While the BJP appealed to the state’s Hindu voters and their growing concerns around migration, Muslim population growth in the state, and threats to their way of life, the AITC labelled the BJP as the “outsider” and harped on the party’s divisive Hindu nationalist agenda.

In the 2019 General Elections, the BJP won 40 per cent of the Lok Sabha seats from West Bengal (18 out of 42 constituencies), which boosted its hopes for bagging Bengal in the 2021 State Assembly Elections. Not surprisingly, ahead of the 2021 Elections, the BJP mounted fierce campaigns in West Bengal with packed crowds listening to Prime Minister Modi and Home Affairs Minister Amit Shah. Although expected to secure more than one hundred seats in the 2021 State Assembly Elections, given its track record with the 2019 General Elections, the BJP managed to secure only 77 (26%) of the State Assembly seats (albeit, up from just 1% in 2016). Securing 72 per cent of the seats in West Bengal, Banerjee’s AITC party has come back for a third term at the State Assembly, providing hope to many Indians, who are opposed to the current Indian government and the ruling BJP’s politics, that there may be a possibility of challenging Modi’s reign in 2024. 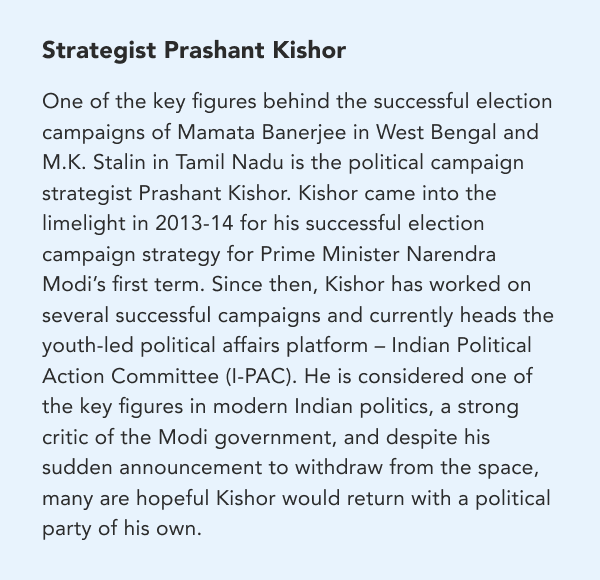 Meanwhile, the once prominent – and the main opposition to the AITC – Left Front-Congress alliance was decimated in this election cycle, while the BJP has risen from a negligible presence to the role of the main opposition, a fact underscored by Modi in his congratulatory tweet to Banerjee. Part of this BJP upswing was fuelled by many high-profile AITC leaders defecting to the BJP over the past couple of years due to differences with AITC leadership, structure, and political agenda, which also highlights the BJP’s tactic of infiltrating state politics through prominent local faces who have strong connections to the electorate and can therefore better identify with them. One example is former AITC leader Suvendu Adhikari, who won the coveted Nandigram seat against AITC leader Mamata Banerjee this year. Adhikari was part of AITC for 20 years and the face of the anti-land acquisition movements in Nandigram, but differences with AITC’s leadership led to his move to the national BJP party.

Since the 1960s, Tamil Nadu’s state election results have alternately favoured either of the two regional Dravidian parties – All India Anna Dravida Munnetra Kazhagam (AIADMK) or the Dravida Munnetra Kazhagam (DMK). The Dravidian parties trace their origins to the Dravidian movement of the early 1900s in south India that wanted to achieve a separate nation for the four south Indian states. The movement primarily stemmed from the linguistic differences between the north Indian languages with Indo-Aryan roots, such as Hindi and Gujarati, and the south Indian languages, such as Tamil and Malayalam, which had Dravidian roots and underscored the large linguistic and cultural divide between the north and the south.

While the modern Tamil parties’ politics are no longer aligned with separatist sentiments, the southern state of Tamil Nadu prides itself on its Tamil identity, language, and politics, and has proved difficult ground for the BJP with its north Indian linguistic and cultural identity. But ahead of the 2019 General Elections, the AIADMK, which ruled Tamil Nadu for almost a decade, joined the BJP-led National Democratic Alliance, giving the BJP a foothold in the region’s politics. Since former AIADMK leader Jayalalithaa’s demise in 2016, which severely impacted the party’s credibility and spirit, AIADMK joined the BJP’s national alliance in the hopes of retaining power.

The Left Democratic Front (LDF), led by the Communist Party of India (Marxist), made history during this year’s state election by returning for a second continuous term as the Kerala State government, a feat no other party has achieved in the past four decades. Although the 2019 General Elections did not favour the LDF, in the 2021 State Assembly Elections, LDF finished at the forefront, winning 71 per cent of the seats (99 out of 140). Aiding the Left Front government’s comeback this month was its impressive governance in Kerala and prioritization of state needs – from infrastructure development, education, social welfare schemes, flood relief, to public health management in the face of the Nipah virus in 2018 and more recently COVID-19.

Chief Minister Pinarayi Vijayan’s leadership, and liberal stance during the 2018 Sabarimala temple debacle where women of reproductive age were finally granted entry to the temple under a Supreme Court of India ruling that met with severe backlash from devotees, is particularly notable. Despite criticism and protests by right-wing activists, devotees, and opposition parties, this act was particularly effective in gathering the support of women and youth. Meanwhile, the BJP may have lost the lone Assembly seat it had in Kerala, but given the increasing voter share percentage, the party is not willing to be sidelined just yet as the central leadership takes a closer look at the party’s performance in the state. Furthermore, with the wipeout of the Communist Party of India (Marxist) from the State of West Bengal this election, Kerala is now also the only remaining state where CPI(M) has a prominent status.

In the northeast Indian state of Assam, the BJP managed to retain its majority (75 out of 126 seats) largely due to one key factor – a fractured opposition led by the Indian National Congress (INC), the oldest political party in India and the largest opposition to the BJP on the national stage. Since 2019, the state of Assam has seen anger, fear, and uncertainty over the combined implication of the National Register of Citizens (NRC) and the exclusionary and contentious 2019 Citizenship Amendment Act (CAA).

For more than 40 years, the influx of undocumented immigrants from Bangladesh has played a crucial role in Assam’s politics, and the NRC was implemented to address the ongoing issue. While the NRC has garnered some public support, the Assamese people have voiced significant opposition to the proposed implementation of CAA that would allow non-Muslim minorities from neighbouring Bangladesh to gain citizenship in India. The anti-CAA protests in 2019 even gave rise to two new regional parties – Assam Jatiya Parishad and Raijor Dal. While Assam’s population has protested the contentious CAA which is yet to be implemented, it did not impact the BJP’s popularity in that state. Ironically, the NRC was the opposition Congress party’s brainchild, but its inaction on the immigrant issue for almost 15 years did not go unnoticed by the electorate.

Despite all the problems with the National Register of Citizens, with its first list published in 2019 and omitting 1.9 million people, including thousands of Indigenous people in Assam, a BJP-led alliance was re-elected for a second term, which underscores the lack of a meaningful opposition rather than the BJP’s popularity.

The Union Territory of Puducherry, located next to Tamil Nadu on the Bay of Bengal, marks yet another region where the BJP emerged victorious. In alliance with regional parties, the national party of BJP secured 53 per cent of the Assembly seats (16 out of 30). The opposition, led by the Indian National Congress, whose government collapsed earlier in February before completing its five-year term, failed to regain its power due to its inefficient governance and resulting lack of popularity with the electorate.

Overall, the five State Assembly Elections indicate that PM Modi’s BJP is carving out space for itself, including in West Bengal and Tamil Nadu. Although the party lost its single assembly seat in Kerala, its presence is just starting to grow as it decodes local electorates’ motivations. Apart from West Bengal, each of the other elections wrapped up by April 6 before the second COVID wave hit India, which may have been an advantage to the BJP as policy failings around the pandemic were not yet evident. Over the past month, questions have been raised about the BJP-led Indian government’s role in the evolving humanitarian crisis in India, including the relaxation of restrictions, allowing large gatherings that seeded super-spreader events, the slow roll-out of vaccines domestically, and a lack of accountability regarding their mismanagement during this crisis. Indeed, the country was largely unprepared in terms of its oxygen supply-chain, life-saving drug production, and medical infrastructure, despite the crippling first wave. The country’s state governments are also not free of responsibility.

While Gujarat, Uttar Pradesh, and Uttarakhand may seem like apparent wins for the BJP in 2022, the current COVID-19 crisis has left many Indians questioning their political positions. At this juncture, while the public may be distracted with surviving the current surge in COVID-19 cases, Indians are unlikely to forget the impacts of this crisis and the ruling political parties' apathy towards their public health and welfare.